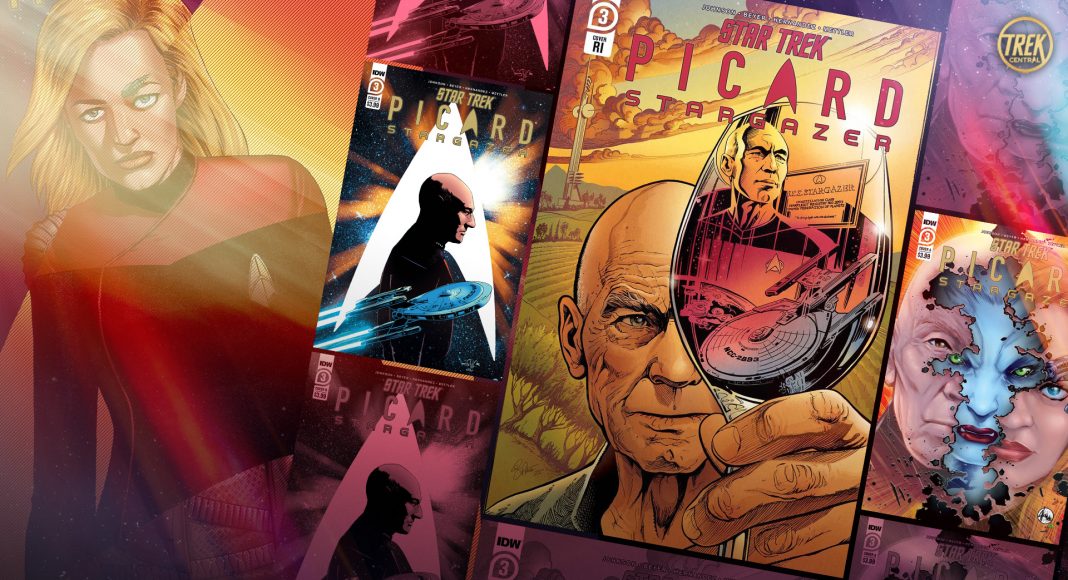 Star Trek: Picard Stargazer comes to a close with its third and final issue. It’s full of action, adventure, and conclusions to this three-issue arc. When we last left Picard and Seven, they defended Jenjor VI from a Reman invasion. And in orbit above, the USS Stargazer defends against a surprise Romulan Warbird.

While this was a relatively standard battle issue, there were a few moments worth bringing attention to. In one scene, Seven hails her comrade aboard the Fenris Rangers ship. The alien she calls speaks a different language, unintelligible to Seven and the reader. Seven requests that the alien speaks in Standard so that she and the reader can understand him.

This was a confusing moment as it’s unclear why Seven could not use her Universal translator to understand the alien. Unless his language was so complex, the translator could not function, but it seemed unlikely. There are a handful of references to the “Federation Standard” language in Star Trek, but they are few and far between.

One disappointing moment in the story is when Picard and the leader of the Reman marauders, Reska, are captured by the Romulans. Picard and Reska are separated, and Picard is held as a bargaining chip. Reska appears out of nowhere and rescues Picard when it looks like all hope is lost. Unfortunately, we never see how Reska escaped captivity. Her showing up without explanation felt very unearned and convenient for the plot.

She explains that since she’s been fighting her whole life, nothing could stop her, but it would have been better to see her escape. One theme of these three issues has been the debate between action and diplomacy. Seven supports solving problems through force, while Picard advocates for peaceful solutions.

Issues 1 and 2 did a great job exploring this theme, but their resolution felt unsatisfying. Picard’s view ultimately wins out when Picard and Seven use empathy to connect with Reska, proving that using words can solve problems. The problem with this is we didn’t see why Seven’s philosophy was wrong, only that Picard’s was right. Seven claims she approached the situation on Jenjor VI too hastily, but we don’t see her actions’ negative consequences.

One highlight of the issue was the surprise appearance of Admiral Janeway in the Epilogue. Janeway gets word from Picard that Seven turned down joining Starfleet. Janeway wants to reconnect and likely convince her to reconsider. This is an exciting opportunity for future stories, as we have not seen any of Seven’s relationship with Janeway post-Voyager. More stories with Admiral Janeway would also be appreciated. Seeing her in Prodigy has been a great addition, but it’s time she got her own proper story.

With the third and final season of Star Trek: Picard releasing in a few months, it suggests that this series somehow ties into the show. After watching two trailers, it’s difficult to say exactly how this issue ties in. The closest connection that can be made is that in the Season 3 trailer, we see Seven wearing a Starfleet uniform. This suggests that because of the events of this story, Seven decides to join Starfleet.

While it was an action-packed issue, this story didn’t quite stick the landing when examining its characters and themes. It does, however, raise excitement for the final chapter in Picard’s story and the entire Next Generation cast.