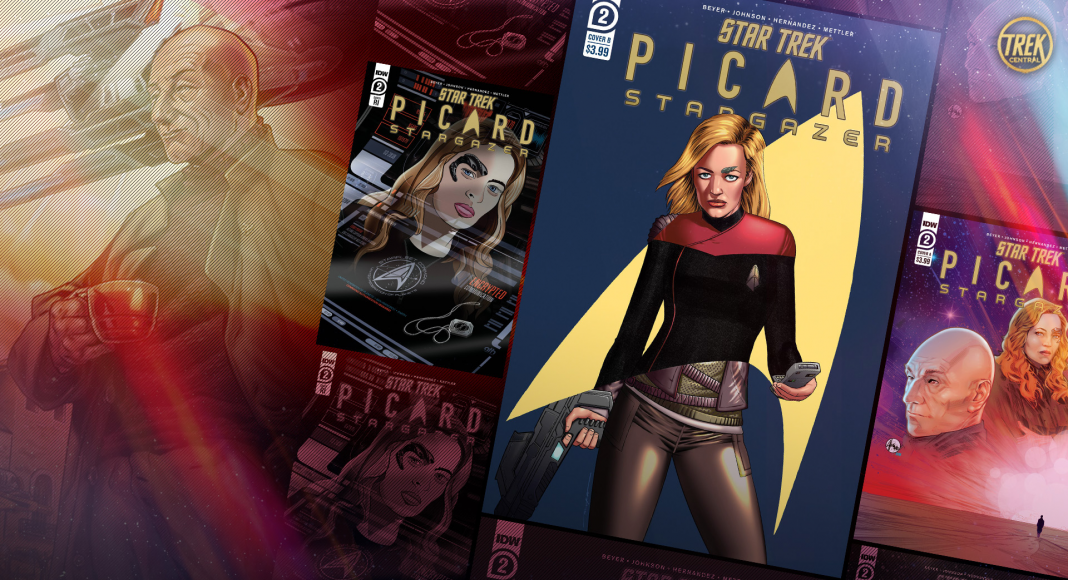 Star Trek: Picard: Stargazer #2 continues the explosive story of Admiral Jean-Luc Picard’s exploits post Season 2 of Star Trek: Picard. We last saw Picard and the modern-day USS Stargazer investigating a distress call on a dying world, Jenjor VI. They ran into Seven of Nine and the Fenris rangers, who fought a mysterious group of marauders.

This is an action-packed issue, filled with developments and revelations. We learn that not only do the Romulans have a history with this planet, but also the Remans, their slaves. The Remans have not been heavily utilized in Star Trek thus far, as they made their first debut in Star Trek: Nemesis. Their relationship is worth more investigation. It is good to see them featured here.

One stand out moment early on in the issue is when Seven blows up an incoming enemy ship with a shoulder mounted cannon. This simple action reveals much about who Seven has become. She murders without abandon, totally committed to the cause. This Seven could never fit in Starfleet if she wants to perform such acts as these. Her destroying this ship deepens the philosophical divide between herself and Picard. The question of diplomacy or action.

We also finally learn the origin story of how Jenjor VI got to be such a barren landscape. Decades ago, the Romulans conducted intense mining operations on the planet. Their activities created a toxic atmosphere that drove the indigenous population underground. The Reman slaves, however, while abandoned, remained unaffected by the pollution. They became the marauders that battle Seven and her Rangers.

The philosophical debate comes to a head once more when Picard argues that they should try to reason with the marauders instead of resorting to violence. Surprisingly, he’s quickly outnumbered by the captain of the Stargazer, who agrees with Seven’s plan. This is surprising that a Starfleet captain would so quickly rule out diplomacy. Or that Picard would be so willing to accept being overruled. As the ranking officer, he should be able to decide what the plan is. Something about this interaction seemed out of character for everyone.

The Past Bites Back

Picard stays behind to help the Jenjorans evacuate when the Remans attack the underground city. Their group leader calls out Picard specifically, as she claims he left the planet to suffer at the hands of the Romulans when he was captain of the Stargazer. This harkens back to the last issue when we saw Picard fend off the Romulans from mining in this pre-warp world. He distracted them temporarily, but it appeared they returned and wreaked havoc. She blames him for everything that’s happened to her people.

This motivation does not seem the most well thought out, as Picard couldn’t have been the only thing stopping the Romulans from invading. The decision not to protect Jenjor VI would have been a Federation-wide policy. It would not have rested on Picard alone. He was one of many captains to ignore the needs of Jenjor VI. Who knows who else had a history with the planet?

Our final moment cuts back to the Stargazer in orbit. A Romulan Bird of Prey appears and hails the ship. A Romulan commander appears on screen, claiming Jenjor VI for himself. An exciting cliffhanger which adds a new player to the planet’s power struggle.

Overall, issue 2 of this series was heavy on action and spectacle but light on character and internal conflict. Hopefully in the next issue we can see more the debate between action and diplomacy and see who, between Picard and Seven, ends up being right.

Star Trek: Picard Stargazer #2 can be found via the IDW website. It’s releasing on Wednesday 5th October. However, this is right in time for the Star Trek Universe panel at New York Comic Con later this weekend. Perhaps we’ll learn if this comic links with the upcoming third season of Picard.