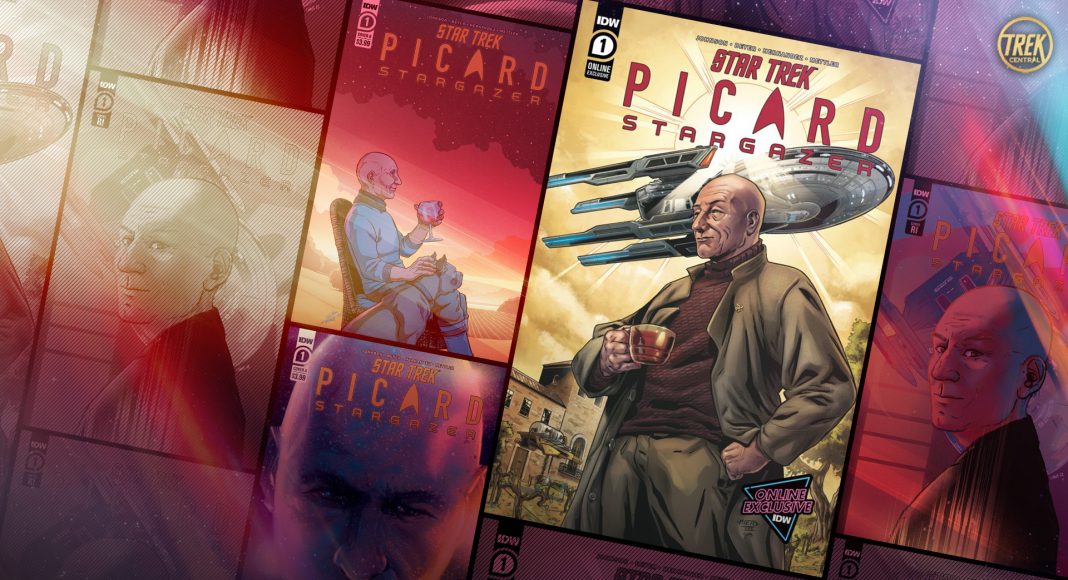 With the tease of a full cast reunion in Season 3 of Star Trek: Picard next year, the wait is more exciting than ever. Thankfully, IDW Publishing has released the first of a three-part comic series called Star Trek: Picard: Stargazer to make the wait more bearable. The title suggests a story about Picard’s first command aboard the U.S.S. Stargazer, but it quickly becomes much more.

The issue kicks off with a tense negotiation between Commander Seven of Nine and an unknown species. Seven is dressed in a Starfleet uniform, which is unique since we have never seen her wear a uniform before. She wore an alternative uniform in Voyager, and in Picard, it was revealed that she was denied entry from Starfleet due to her Borg background.

The negotiation soon escalates out of Seven’s control resulting in a screaming match. When one of the sides turns violent, the computer program ends. It’s revealed that this was all a holodeck simulation run by none other than Picard himself. The test was a modified Kobayashi Maru, the “no-win-scenario” test meant to assess how a cadet commands under pressure. Picard’s version is similar but offers a more realistic diplomatic encounter.

Ultimately, Seven decides that she’s not cut out for this line of diplomacy. She’s more equipped to handle situations requiring action-oriented solutions, so she joined the Fenris Rangers. This line of reasoning makes sense for Seven’s character, as her Borg roots would want her to find the most efficient solutions to problems. And often, action is quicker and more results-driven than slow, plodding diplomacy.

Back to the vineyard

We then cut to Picard on the vineyard. This story firmly takes place between Seasons 2 and 3 of the show, so life is peaceful – for now. Laris scolds him for not answering his messages from Starfleet, and Picard finally acquiesces to answer them. It was implied that Picard and Laris became a couple at the end of Season 2, but we see no hints of that relationship here. Either that didn’t work out or they are just not outwardly affectionate.

Picard soon finds himself aboard the Stargazer, the new Stargazer. Captain Rios is no longer captain since he decided to stay in the 21st century at the end of Season 2. The new captain is an Andorian named Mekara, and she questions Picard about a pre-warp planet that the original Stargazer last visited. She mentions a conflict over the planet with the Romulans, which leads to a flashback of 50 years in the past.

Picard with hair. Something about it feels wrong, yet here we are. Picard, with a crew we’ve never met before, observes the planet Jenjor VI. The world is just decades away from achieving warp, so they closely monitor the planet. Picard is fascinated by it from an anthropological perspective and fights the urge to go down.

The wonderful moment is soon cut short by the arrival of a Romulan Bird of Prey. Classic. The Romulans are here to investigate the presence of a rare isotope, but Picard believes they may try to take it by force. To protect the planet and prevent a war with the Romulans, Picard transmits the coordinates to an asteroid belt where the isotope can also be found.

The Romulans agree to leave the planet unchanged, and the crisis is averted. What is not said, however, is that the location of the isotope was a bluff. Picard didn’t know if the isotope could be found there. Lucky for him, it all worked out.

Back To The (Star Trek) Future!

In the present, the new Stargazer investigates Jenjor VI. Captain Mekara says it’s safe to see since the supernova weakened the Romulan Empire. This, of course, is a reference to the Season 1 plot and the plot of Star Trek 2009. However, something disturbing is discovered: the planet shows no life signs. Beaming down to the planet, Picard and the away team find exactly what they scanned. The world is a desolate wasteland.

Suddenly, marauders attack the crew, flying in on hovercrafts. The imagery evokes post-apocalyptic stories such as Mad Max. Picard runs from the laser fire and takes refuge in a cave. And standing there, coming to his rescue, is none other than Seven of Nine herself. She references their earlier conversation about handling the problems Starfleet can’t, and the issue is closde.

It’s uncertain whether or not this story relates to Picard Season 3 since not much is known about its plot. Perhaps the planet Jenjor VI will play some role in the series. Overall, this was an exciting issue that shed light on what’s happening in the Picard universe post-Season 2. Star Trek: Picard Stargazer also highlighted some activities the original Stargazer got up to when Picard was its captain.

Star Trek: Picard Stargazer is available from the 31st of August 2022. You can pre-order via IDW Publishings website. However, it is also available from all good comic book stores. The second issue arrives on October 5th 2022.