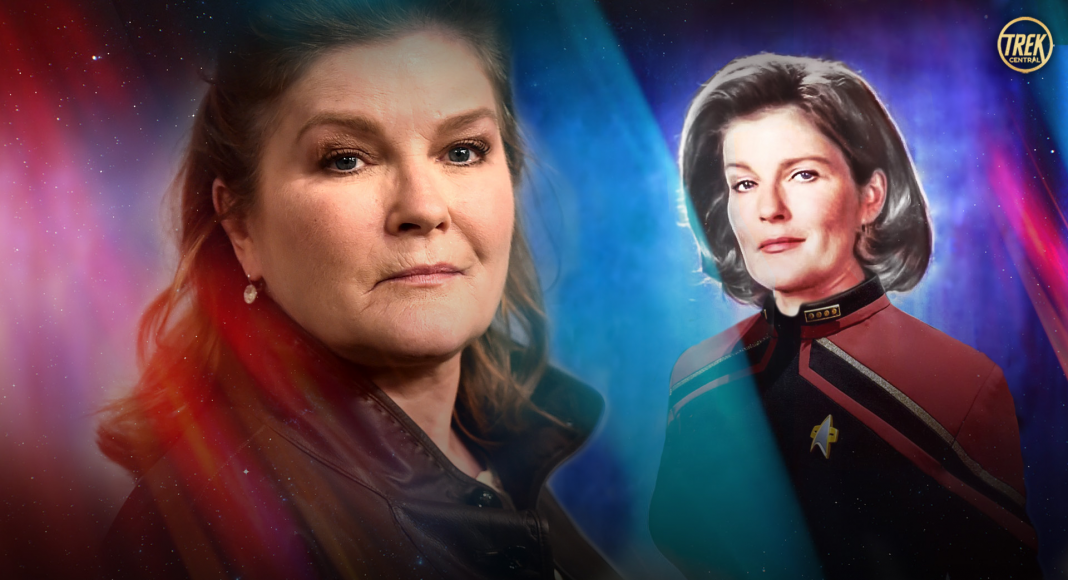 Is It Time For STAR TREK: JANEWAY?

With new Star Trek series left, right and centre, fans are right to ask what is next. It seems like the Star Trek Universe is constantly expanding. Additionally, legendary characters like Jean-Luc Picard are returning in their dedicated shows. However, with Star Trek: Picard ending, Is it time for Star Trek: Janeway? Kate Mulgrew has revealed there have been “conversations”.

Before we get carried away, there is no confirmation this is in the works. However, could it work? Speaking at Star Trek: Las Vegas 2022, Kate Mulgrew revealed that there had been talks and conversations. Star Trek: Voyager’s Captain Kathryn Janeway is back in the animated Star Trek: Prodigy series. However, is it time for more of the legendary Captain?

The Star Trek Las Vegas 2022 convention took place the other week. Star Trek: Voyager’s Kate Mulgrew beamed down to talk to fans about her character and the shows. However, one fan asked the actress if there had been any talks about doing a “Star Trek: Janeway” series. Following crowd applause and cheers, Mulgrew chose to answer this question.

She reminded fans that it is simply “up to you”. An important reminder that Star Trek fans are one of the reasons Anson Mount, Ethan Peck and Rebecca Romjin got the Star Trek: Strange New World series. Fan support is a driving factor is making decisions on the new Star Trek series. As revealed by both Alex Kurtzman and Picard Showrunner Terry Matalas.

Mulgrew revealed “there are talks” and that “there are conversations”. Might this mean the idea of a Star Trek: Janeway series, or limited series, has been considered? However, the actress confirmed that she has not been offered anything directly. She did say that the creatives are looking at Star Trek: Picard and the value of the series. Ultimately she informs fans that is up to them, as much as her.

With or without a Star Trek: Janeway series, the adventures of the character continue. Kate Mulgrew was cast in Star Trek: Prodigy to reprise her role as Captain Kathryn Janeway. Although she was initially only playing a hologram version of her character, the actual real Admiral Janeway does appear in Episode 10. The story of the character, following the end of Star Trek: Voyager, continues.

Mulgrew was initially reluctant to join the series. Following several months of negotiations, she was convinced to reprise her role by the idea of introducing Star Trek to a new generation of fans. Star Trek: Prodigy is currently awaiting the airing of the 10-episode second half of the first season. Admiral Janeway will appear again, commanding the USS Dauntless.

While the main storyline of Star Trek grips many: Prodigy, I love what is going on with the real Admiral Janeway. She is hunting for the main ship, the USS Protostar, but also for Captain Chakotay. Prodigy is aimed at a younger Star Trek generation, but it’s still engaging the older audiences who love Star Trek: Voyager and these characters.

The rise of streaming is allowing smaller stories to be told. While Star Trek: Picard has enjoyed its three-season run, other franchises have opted for short stories. Disney’s Lucasfilm ran a one-season Star Wars: Obi-Wan Kenobi series. The idea was to bring back the legendary actor, Ewan McGregor, to tell a short story. It saw massive success worldwide. However, many fans are asking for a second season.

Currently, Star Trek has not attempted sometimes like this. However, a “Short Treks” format has tested the water for one-off episode stories. Therefore there might be room to do another limited Trek series following the end of Star Trek: Picard. Indeed, as Captain Janeway, Kate Mulgrew has the following to also pull audiences, much like Picard’s announcement did.

One concern with these limited series is not to focus them around a single character. I think it would be better to use multiple well-known characters. For example, I think a new limited Star Trek series would do well with numerous legendary characters. Reunite some of the Voyager cast or other Star Trek characters. That would have more pull, in my opinion.

What Could Star Trek: Janeway Explore?

First, if we do a Star Trek: Janeway series, this will have to coordinate with Star Trek: Prodigy. The writing team on the animated series is currently playing with Janeway as a character. Where would this new Janeway series even be set? Perhaps in Star Trek: Picard’s time of the 2400s?

Seven of Nine (Jeri Ryan), a Star Trek: Voyager character, is active and running around. Perhaps this could be a story for the show to link up with. Many have asked for a Seven spin-off show, even asking Picard Showrunner Terry Matalas a few times. Especially with the Picard series ending.

One storyline could revolve around The Borg. Janeway dealt with them in the Delta Quadrant during the USS Voyager’s journey home. However, with Star Trek: Picard Season 2 now introducing a new faction of the Borg, perhaps it’s time for Janeway to beam down and deal with them once and for all. Additionally, perhaps a return to the Delta Quadrant?

There is always room for the Star Trek Universe to expand. With Star Trek: Picard wrapping at three seasons, that does leave room for something new. However, it’s essential to consider there is a lot of Star Trek right now. The latest Star Trek: Strange New Worlds series has proved the episodic format of Trek works just as good as serialised stories.

Kate Mulgrew’s Captain Janeway is not only a legendary Star Trek character but also an inspiring one. With the Star Trek Universe expanding all the time, it might not be long till we see more adventures with Janeway.