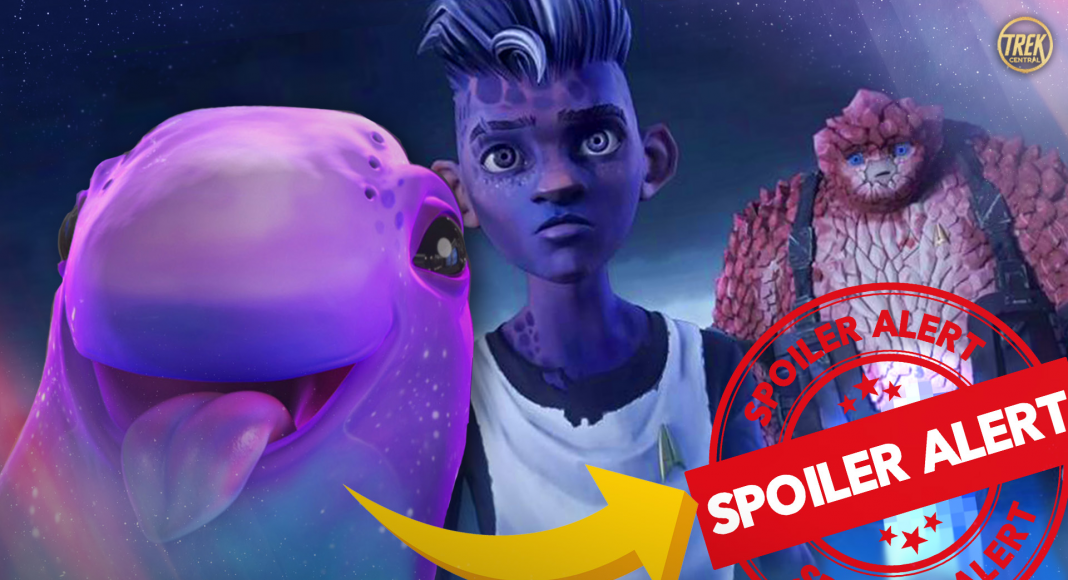 Star Trek: Prodigy has returned to our screens. We’re once again following our young crew of the USS Protostar. However, the next ten episodes spark a BIG character change in Star Trek: Prodigy. One of the most loved characters among the crew is going to change. It has been theorised about for some time among Prodigy fans. We’ve also got new details on how the series came to be.

A recent interview in SFX Magazine with Dan and Kevin Hageman, the showrunners of Star Trek: Prodigy, has shed new light on Trek’s latest animated series. The next ten episodes are all about the crew heading towards the Federation. This isn’t season two of Prodigy. That’s coming “next year”. Season “1.5”, as fans call it, is about Admiral Janeway (Kate Mulgrew) commanding the Dauntless and trying to unravel the mystery of Chakotay and what’s happening to the Protostar.

SFX Magazine has seemingly revealed the Murf character change. Rather than being the cute Baby-Yoda-like mascot, Murf looks to change into some small alien with arms and legs. Whether this was supposed to be revealed like this, who knows? However, we’ve already previously caught a glimpse of Murf in this form during one of the Prodigy trailers. Of course, it’s a blink, and you’ll miss it moment, but it was there. Additionally, we’ve been aware of something like this for some time now.

Earlier this year, NickAlive.com posted the image below. It showcases a now-evolved Murf standing with the USS Protostar crew. At the time, it was released too early. Especially given there was no indication within the first ten episodes of Prodigy that anything would be happening to our cute alien. However, with the official reveal only weeks away and SFX Magazine spilling the beans on this, we’re sharing the original image with you. It’s an interesting change for Murf. However, you have to wonder if their voice will change too!

During their SFX Magazine Interview, the Hageman brothers revealed new information. We knew Ronny Cox was back as Admiral Edward Jellico. However, fans should expect “even more legacy characters” as the series continues. Interestingly, the pair also note that Prodigy takes place “concurrently” with Star Trek: Picard. That series takes place in 2399-2401, but some key events occur in the 2380s. Likely this is what the Hageman brothers are referencing.

What’s fantastic is what’s set up in episode 10 is Admiral Janeway is on the hunt. Now to see them escape Admiral Janeway – how do they do that? Kids who just learned how to fly a starship? Going against Starfleet? The kids don’t know theres a whole other story going on with Voyager and that Chakotay element. I don’t think we’re going to resolve that in these next 10 [episodes].

Chakotay’s (Robert Beltran) story seems to be one that might last more than this season. It’s a shame; to some, it felt a bit dragged out, especially Voyager fans dying to see more of these crew members. However, we’ve also got the return of another character. William Campbell is reprising his role of Thaidun Okona. He’s already been seen in the same YouTube clip that shows Murf’s change.

The Borg Return In Epsiode 12!

We always knew we’d encounter The Borg again. Star Trek: Prodigy is walking in the mess Voyager left behind. Although it seems like the damage Janeway and her crew did has permanently stunted The Borg, or has it? Regardless we’ve got a brand new clip via Decider as a preview for Episode 12. However, we’ve also received new information from Weekly Logs for the series.

Executive Producer Aaron J. Waltke has revealed the new mini audio log series. Kate Mulgrew voices it as Vice Admiral Janeway while she commands the USS Dauntless. Waltke personally wrote these short stories. They serve as bonus material for the show. Giving away new clues, lore, and, of course, Star Trek canon. You can find them all via the Star Trek Logs Instagram account. These new logs will somewhat expand what we see in the episodes.

Episode 12 is titled “Let Sleeping Borg Lie”. As you can imagine, this is all about The Borg Collective and the Protostar crew encountering them. You’ve got to commend the detail and work of the Prodigy creative team. Inside the Borg cube and the Collective, the mind looks fantastic. It seems Murf isn’t the only BIG Character Change In Star Trek: Prodigy. Especially as the crew learn more. Episode director, Sng Shin, had this to say when speaking with Decider earlier.

From a directing perspective, after so many stories about them, it was exciting to see our beloved characters interact with such a formidable force such as the Borg.

The world of Star Trek: Prodigy is only getting bigger and better. New York Comic Con 2022 saw the release of limited Murf plushies. Given the limited nature, they’re now on eBay from anywhere between £50-£100. Perhaps this might let Paramount know fans are eager for good quality merchandise. Maybe “Murf Is Landing”? We’re joking, of course.

In all seriousness, Prodigy is doing very well at expanding its audience. Just recently, Star Trek: Prodigy Supernova was launched. This video game takes place between Episode Ten and Episode Eleven. It introduces the player to a new unique storyline that appears to expand the background of certain characters. However, there is also a young adult novel coming up. Prodigy has found the younger Star Trek audience and made its mark.