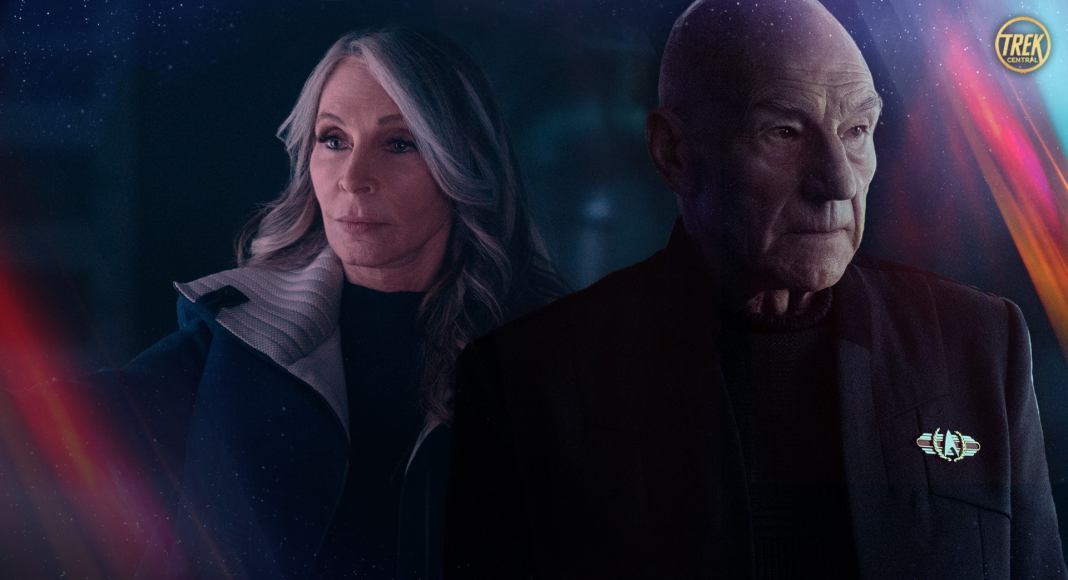 While we’re almost at the end of 2022, Star Trek isn’t done. A brand new Star Trek: Picard Clip kickstarts the mystery of season 3 for us. The clip, which you can watch below, was included in this week’s edition of “The Ready Room“. The Star Trek aftershow is hosted by Wil Wheaton. However, while it was a focus on Star Trek: Prodigy, it had to tease what was next in the Star Trek Universe. Therefore, a tease of Star Trek: Picard Season 3.

There are fewer than 50 Days until the Star Trek: Picard series finale. While the third season will air on February 16th via Paramount+, we still do not know much about the plot. However, there have been hints at two characters sharing much of the story. Sir Patrick Stewart’s Jean-Luc Picard has unfinished business with Gates McFadden’s Beverly Crusher. Therefore, might this be who is trying to contact him via the comm badge?

The Mystery Of The Star Trek: Picard Clip

The clip opens with Picard writing in his Chateau residence. Additionally, as confirmed by Wil Wheaton, this clip takes place in the season premiere episode. This episode is also written by Showrunner Terry Matalas and directed by Doug Aarniokoski. The ping of a Starfleet comm badge briefly haunts Picard. While his computer is no help, it sens Jean-Luc searching around his study. However, while digging through boxes, we can see relics of his past life.

Eventually, Picard finds his old Starfleet box. He throws his old iconic red uniform aside. Something I can imagine many Trekkies gasping at. However, upon picking up the old combadge we can see Jean-Luc pause for a moment. Likely remembering his past. The computer reveals that there is an encrypted message being sent to the communications device. However, as Jean-Luc asks, why would someone send something to a 20-year-old communications badge?

The Star Trek: Picard Clip cuts off here, with Picard asking himself why anyone would contact this old device. I do love how the computer chips in with her own input. While I’m on the subject, is there more to this computer voice than meets the eye? Maybe not. We’re left with a mystery. Who is contacting Jean-Luc Picard via this old device? Well, I personally think the answer is obvious right now. Based on the Star Trek: Picard Season 3 trailers, it’s Beverly Crusher.

Star Trek: Picard Season 3 might see unresolved matters between Jean-Luc and Beverly. Additionally, this has been suggested by both cast and creatives. Crusher sends a distress call message to Jean-Luc Picard in the teaser trailer. Additionally, the trailer editing lines up Picard picking up the commbadge with the voice of Crusher. Therefore, this suggests that she sends the coded message to her old Captain.

The original teaser trailer opens with Crusher’s ship being boarded. Her new ship is actually an old Starfleet vessel. It’s named the “SS Eleos” and belongs to the new organization crusher works for. Think “Doctor’s without borders”. Additionally, it’s previously been revealed that Season 3 starts with Doctor Crusher. Therefore, expect to see Beverly being active and having a good fight. Gates McFadden recently spoke about how she loved returning to play Crusher again. Speaking to Den of Geek Magazine, she said the following:

As an actor, you can’t help but bring the changes in you into that performance. We have all become closer over the years, and so to have a chance to act again together in the same roles… it was extraordinary to me that it could even happen. It was really quite wonderful to be looking into Patrick’s eyes or Jonathan’s and know that there’s so much love, as well as laughter and bonding, between all of us.

All Eyes Ahead To Star Trek: Picard!

New ship? Old crew? Epic storyline? We’re all set for Star Trek: Picard Season 3. Sir Patrick Stewart returns alongside his Star Trek: The Next Generation cast mates on February 16th 2023. Season 3 will have ten episodes that will air via Paramount+ and run until April 20th. Additionally, connections to Star Trek: Deep Space Nine and Star Trek: Voyager have been teased by series creatives.