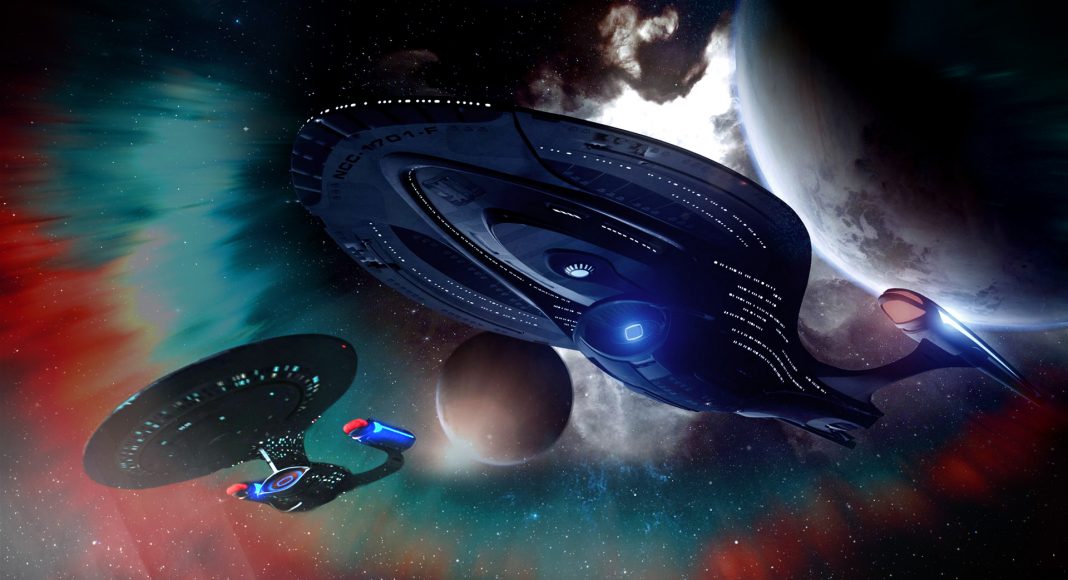 Is the next Starfleet starship going to be a new USS Enterprise? That is the question on people’s minds right now, especially with the end of Star Trek: Picard Season 2. However, Is a new Enterprise on the horizon or not? Well, with recent production crew teases here and there, we might have some hints at the next Star Trek starship!

The USS Stargazer has been our new focus for Season 2 of Star Trek: Picard. The new ship was designed by Dave Blass as well as Trek veterans Doug Drexler and John Eaves. However, while the ship has been featured in behind the scenes pictures, it might not be the focus for Star Trek: Picard Season 3!

Star Trek’s resident leaker/teaser Terry Matalas the Showrunner of Star Trek: Picard has been sharing comments via Twitter. Terry’s recent Twitter conversation gave us details about a new Star Trek starship for Picard Season 3. A Trekkie responded to Matalas’s post of the production crew on the Stargazer bridge and got an interesting reply.

Surprisingly, the Stargazer bridge is being used again for another starship it would seem. However, what ship is this going to be? Additionally, this is not the first, or last time, Star Trek reuses bridges for new starships and such. So it is not a surprise but does suggest we are getting a new starship of sorts in the upcoming third season of Star Trek: Picard.

Additionally, we do have hints at what this new starship might be. Doug Drexler originally posted a behind the scenes picture of the bridge. However, as one of the LCARS featured a picture of the new starship class, it was removed. But, Andrew Jarvis has confirmed that if the picture was uncensored “you would know”. Thus, suggesting that Trekkies know the new class of starship.

it’s time for some theories. It would not be a long shot for the new starship in Star Trek: Picard Season 3 to be the USS Enterprise. Additionally, what if this new ship is the USS Enterprise-F? A ship that is regarded among some Trekkies as the next Enterprise was brought to life via Star Trek: Online, the MMO video game.

Star Trek: Online takes place in 2409/10, just a few years after Star Trek: Picard Season 2 and Three take place. Additionally, Matalas has confirmed Season 3 will see a year-ish time jump. Moving us further into the 25th century. Not to mention that STO starships have also been used in Star Trek: Picard Season 2. The Starfleet Taskforce in Episode One featured ships made and designed in the video game. Officially taking their place in the canon.

Picard Season 3 is being regarded as a The Next Generation reunion. However, while all the cast of TNG is returning, we’re forgetting one important character. This being the USS Enterprise herself. Now, the Galaxy-class Enterprise-D is long gone. The starship met its fate at the end of the movie, Star Trek: Generations. However, what about the USS Enterprise-E? Well, that could be an option too! We have seen Sovereign classes in Picard Season 2.

Let’s touch on the USS Enterprise-F. The Odyssey-class starship is personally one of my favourites, given I’ve mentioned the starship in about 20 live streams. Additionally, Trek Central has covered the starship a million times on our YouTube channel as well. However, if there Is A NEW Enterprise On The Horizon, then where does this ship fit into the ever-expanding Star Trek Universe?

Cryptic Studios, developer of Star Trek: Online, created the “Design the Next Enterprise contest”. The winner, Adam Ihle, created the Odyssey-class, which then became the next USS Enterprise and thus entered the game. STO explores the idea that the Enterprise-E was lost in combat with Star Trek: Voyager’s Species 8472, the Undine. But, STO is not canon for the Star Trek Universe.

Recently, the idea of an Odyssey-class starship has become canon again. In the leadup to Star Trek: Picard Season One, Paramount launched the Star Trek: Picard Countdown comics. These comics followed Admiral Jean-Luc Picard 20 years before the events of the series. However, Picard was commanding his new flagship, the USS Verity, an Odyssey-class Starship, launched in the 2380s.

Author Una McCormack’s novel, The Last Best Hope, also featured the Verity. Additionally, the same book confirmed Mr Worf would become captain of the USS Enterprise-E following Picard’s departure. However, what about the future of the Verity? Well, in Star Trek: Online it became its own class. However, as far as on-screen Trek, it has not yet made an appearance.

Two other theories that are going around at the moment, relate to the first TNG goodbye episode! This would be Star Trek: The Next Generation “All Good Things”. The episode introduced us to the USS Enterprise-D but upgraded. Additionally, the finale gave us the USS Pasteur, under the command of Captain Beverly Picard/Crusher.

Of course, with Gates McFadden coming back as Beverly Crusher, it’s possible she could be commanding her own ship. However, would it actually be the USS Pasteur? Let’s not forget this ship only existed in alt-timelines. I think we might have had enough of those with the second season of Picard.

One starship we must not forget is the USS Titan. Captain William T Riker’s starship is now featured in the Star Trek canon, having appeared in Star Trek: Lower Decks Season One and Two. Additionally, the Luna-class starships appear in Picard Season 2 episode one. Thus, the ship is poised to appear if Terry Matalas and his team have deemed it so.

I’m personally going to say that if the next Enterprise is introduced in Star Trek: Picard Season 3, I’m going to be a very happy man. Additionally, if the ship is the Odyssey-class starship, I’ll be beaming with excitement! See what I did there? Anyway, it’s possible that the ship is either a Sovereign-class or Odyssey-class at this point. So Is A NEW Enterprise On The Horizon? Perhaps! However, only time will tell it would seem.