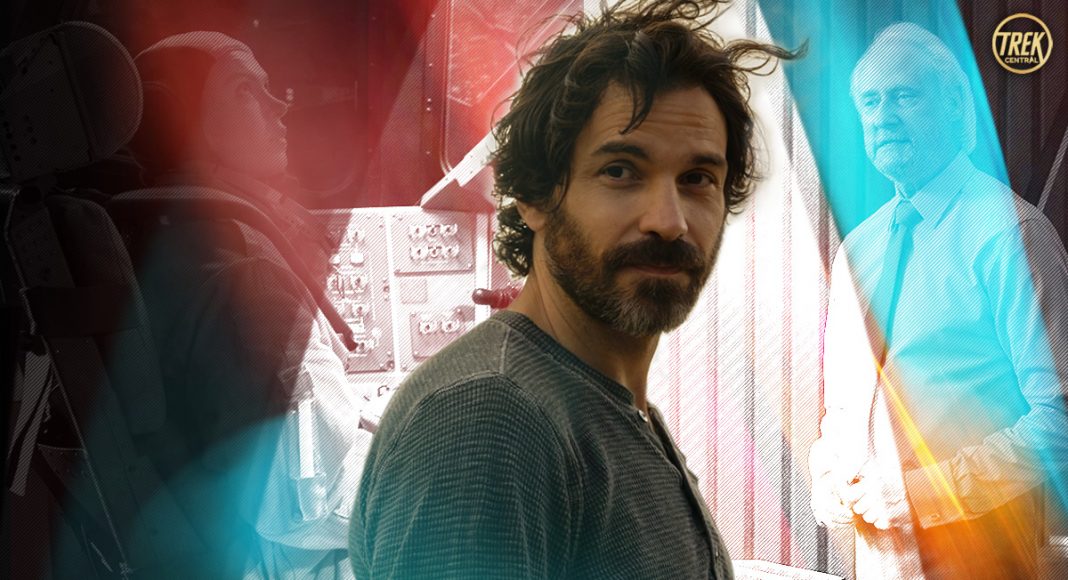 This week’s episode of Star Trek: Picard – ‘Fly Me to the Moon’ is written by Cindy Appel & Directed by Jonathan Frakes.

My early reviews for Picard’s second season praised the show’s focus. The first three episodes told contained stories that advanced the season’s overarching narrative. There was a direction the show was heading, and its course was confident and moving along at a great pace. That focus was somewhat lost last week with “Watcher”, and I think that is largely true of “Fly Me to the Moon” as well. Make no mistake, the season still seems to follow the direction it has established. This episode certainly cannot be criticized for the story not being advanced. In no conceivable way could it be deemed a filler episode. Yet along the way, there are a few pitstops that lead to some odd pacing and juggled tones. But let’s dive in deeper, shall we?

Last we saw Picard, he was transported to an unknown location with the guidance of the “Supervisor”, who looks shockingly like a human version of Laris. But this is not some alternate version of Laris. This person is Tallinn, who is in the same role as Gary Seven in the Original Series episode, “Annihilation: Earth”. Why she looks like Laris isn’t clear, and is a question for another episode. There are more pressing matters: She is responsible for watching over the woman who Q also seemed to be interested in last week. And this woman happens to be Renee Picard, an ancestor of Picard.

We learn a lot about Renee in a few short minutes. Professionally, she’s an astronaut who will be taking part of the Europa Mission, which will occur three days from the time in this present episode. But we also learn some about her personally: she battles with depression and anxiety. She’s clearly afraid, having doubts about her role on the space mission. Tallinn reveals that Renee has been attending therapy to assist her, and she’s been able to monitor her progress.

Picard senses something is afoot with Renee’s therapy, though. And who can blame him. The therapist has a skeptical direction about fear. Picard asks for a different vantage point. And in doing so, Q is revealed as the therapist. A few things about this: First, this disguise is the closest we’ve seen to the almost-cartoonish nature of Q seen in some episodes of The Next Generation. Second, Q is no spectator. He’s an active player in whatever event causes a schism in time, which will almost certainly involve Renee Picard.

Seven and Raffi are finally able to rescue Rios, who is still being held captive by ICE and being transported to a southern sanctuary district. Honestly, there’s not much here to focus on. It’s taken parts of three episodes for this Rios subplot to conclude, and I can’t help but think it’s a drawn-out detour from the main story. Since Rios beamed down, he’s been either hospitalized or in custody. And now he’s immediately back on La Sirena after his rescue. Maybe there will be something more to come of his encounter with Teresa a few episodes back. But if not, little of this story seems to serve many purposes to the overall story.

Ah, the Soongs. Who would have thought back in the days of The Next Generation when Brent Spiner only played Data, Lore, and their inventor Noonien Soong that he would play many other iterations through the course of the franchise. And now there’s another Soong entered into Trek canon: Adam Soong. Adam is a geneticist who is determined to make genetic defects a thing of the past. It’s no mere scientific endeavor. We learn that Adam’s daughter, Kore (played by Isa Briones), suffers from an ailment in which she cannot be exposed to the sun, amongst other symptoms. Stymied by a board who turns down his suggestions, Adam Soong is desperate. Desperation attracts more of the same, because Soong is offered a lifeline by none other than a powerless Q.

The Spiner-de Lancie scenes in “Fly Me to the Moon” are terrific. Both actors bring their A-game, and in process amplify the stakes in how the season is unfolding. Q is apparently without power. His tampering is more direct than usual. He is no director behind the scenes, manipulating the players as he wishes. He now finds himself on the same board, tactically trying to bring about the end that he wants.

Q is featured prominently during this episode. I’m on record saying that less Q is more, but this episode left me wanting more despite Q’s increased presence. I’m fascinated by a Q without power, leaving his next move up to how successfully he interferes with others. It’s a fascinating take, and I’m already anticipating the next face off he has with Picard in this new set of circumstances.

This season’s most surprising drama continues in captivating fashion when the Borg Queen intercepts modern telecommunications and has a police presence dispatched to Chateau Picard. This is all part of a broader plan to draw Jurati into the Queen’s endgame. Jurati has caught the Queen’s attention, showing a tactical and intellectual superiority that the Queen longs to reconnect with. Anne Wersching adds additional layers to what is an already compelling performance as the Borg Queen, with a seductive lure that brings to mind Alice Krige’s original interpretation of the character in First Contact.

As a lone officer stumbles into La Sirena and is captured by the Queen, which will force Jurati to kill the Queen to rescue the cop. I love the scene of the officer onboard the ship, moving through stairs to La Sirena’s upper deck was reminiscent of the scene in First Contact where the Enterprise-E engineering team are attacked by the Borg in the Jeffries Tube. It’s a nice callback by Jonathan Frakes to his own film.

As we find out in this episode’s final moments, the Queen and Jurati share one more intimate moment, where the Queen connects with Jurati in what might be some quasi-assimilation as the Queen dies.

In its five-plus decades of existence, the Star Trek franchise has rarely leaned into the heist genre. Picard appears to start this. In what is this show’s version of an away team episode, Picard, Tallin, Seven, Jurati, Rios, and Raffi end the episode by party-crashing a gala before the Europa Mission takes off. Their purpose: protect Renee Picard and make sure she partakes on her mission despite Q’s interference. They must not make direct contact with Renee. The crew must continue to avoid temporal disruptions.

The episode concludes with this mission in flight. Jurati is on her own, intentionally captured so that the rest of the crew can more easily get into the gala. But unbeknownst to Picard, Jurati appears to have alternative motives, having previously connected with the Borg Queen prior to the Queen’s death.

Do They Ever Go Trek the Stars?

A few times during this episode, particularly with the Rios-Raffi-Seven plot, I thought back to that Duras line in Star Trek: Generations, where LaForge is being observed: “he must be the only engineer in Starfleet who doesn’t go to Engineering.” Star Trek: Picard – ‘Fly Me to the Moon’ has spent very little time in the stars this season. I have wondered how much of the season would be set in 2024, and it looks to still be a significant chunk on top of what’s already occurred there. Don’t get me wrong, this is a good story and the season is overall strong. But I’d be lying if I said I wasn’t getting antsy.

I miss the final frontier. It’s become apparent to me why time travel to the relative present has been used frequently, but small doses, in Trek’s history. Too much present might be too much. And I think this season is beginning to feel the weight of that bearing down. Terry Matalas and the writing crew have my total confidence. This is a good story. But with it comes some challenges, specifically wondering how much of our not-too-distant-future we are going to spend in. Star Trek: Picard – ‘Fly Me to the Moon’ is streaming now.