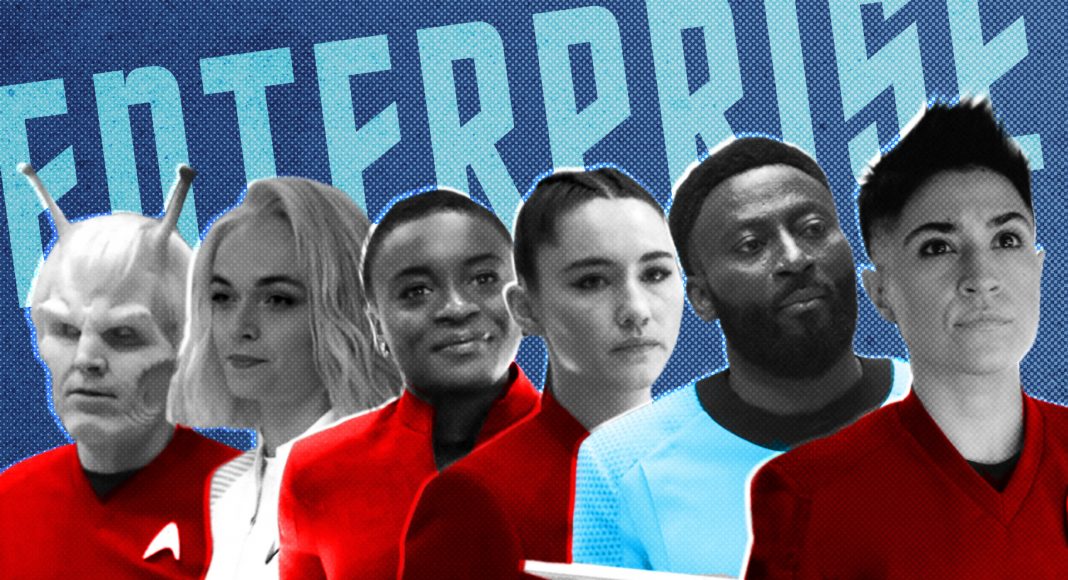 Star Trek: Strange New Worlds premieres in just one month and it’s time to get hyped! The Paramount publicity machine is finally grinding into gear and delivering on the goods with some fantastic character teasers. We’d been begging for these insights for months, and we finally got our wish. So let’s dive right in and meet Captain Pike’s Enterprise Crew and find out what character details those teasers reveal!

There are definitely going to be some details in here that might go beyond what you saw in the promos. Click away now if you don’t want to be spoiled!

With the premiere of Star Trek: Strange New Worlds just around the corner, it’s time for a roll-call! We’ve got a brand new cast. Some playing familiar characters, and some entirely new ones. What ties most of these together is not only will they be new to audiences, but they’re new to the ship too.

With the exclusion of the original pilot, Uhura has been part of the franchise since the very beginning. Yet we know very little about the beloved character first brought to life by Nichelle Nichols. Strange New Worlds will finally change that. Celia R. Gooding has the task of bringing the younger iteration of the Star Trek legend to life. Already a Grammy winner and Broadway star, this is Gooding’s first TV role.

Still officially a Cadet, Uhura is on her first assignment and getting her space legs. Selected from thousands of candidates, she’s there to prove she has what it takes to be a Starfleet officer. The talented young linguist comes with an impressive skill set already speaking 37 languages. Despite this though, Uhura confesses she doesn’t even know if she’s going to stay with Starfleet. Despite excelling in her chosen field, joining Starfleet was a shot in the dark in hopes of finding her path. It’s going to be fun to watch the character grow to realise that Enterprise and her crew are indeed ‘home’.

During The TCA presentation on February 1st, the select press got a little sneak peek of a scene from Strange New Worlds’ pilot episode. And now we have a little peek ourselves.

It’s set in Captain Pike’s quarters for a casual staff dinner, with Uhura in full dress uniform. The cadet has been the victim of a mischievous prank by fellow crew member Lt. Ortegas. According to Den Of Geek’s write-up, the scene is a ‘welcome to the ship’ dinner with a meal cooked by Pike himself, the old fashioned way. During the scene we’ll find out how and why Uhura joined Starfleet. If you want to read the full details, you can find it on Den of Geek’s site.

We also see Uhura go on an away missions, potentially develop a bit of a crush on Spock, and not be shy in speaking up with an opinion. And there’s no doubt that her enthusiasm and her inexperience will be a catalyst for a lot of fun and adventure!

Played by British actress Christina Chong, La’An is the new Chief of Security on the USS Enterprise. And if you hadn’t heard the news already, the character is confirmed to be related to the infamous Khan (TOS’ Space Seed & movie Star Trek II – The Wrath of Khan). Whether La’An knows this or not has not been revealed. What we do know about La’An is that she is a survivor.

During her promo Spock initiates a mind meld, and witnesses an event from La’An’s childhood. We see two children running from something in a torch-lit cave. The adult Spock and La’An also appear to be in that same torch-lit cave, connecting the scenes. The voiceover tells us La’An was the only survivor of a disaster and she knows what it’s like ‘to be alone’. A shared moment with Spock, who also knows what it’s like to be alone and an outsider.

La’An comes across as a very serious customer. She is direct, intense and clearly physically confident and capable. The typical kind of ‘buttoned up’ Security Chief. She’s not the kind to let herself appear vulnerable either, confessing she struggles to ‘stop running’, implying an avoidance of connection. But there’s something clearly lurking below the surface that will add layers to the character. Early casting documents (thanks to Illuminerdi‘s article) state that she suffers from PTSD. That clearly appears to be present, and linked to the events of her childhood.

We do see some fun in the character though, with costumed shenanigans in the mix. Hopefully, we’ll see her loosen up over the course of the season as she fit into Pike’s Enterprise Crew.

Early casting documents described Melissa Navia’s ‘Lt. Erica Ortegas’ as “smart, funny, competitive, and is able to pivot from handling a gun to making a joke.” They definitely have not strayed too far from the plan. It’s also noted that Erica is a “veteran of combat“, which may relate to experiences in the Klingon War.

From Uhura’s teaser, we know that Ortegas is a fun, mischievous character. Her own teaser did not disappoint in those stakes either. The opening exchange with Captain Pike set the tone, Ortegas’ sense of humor shining through. She’s also got the universal cockiness of a great pilot. Some fans are already comparing the character as SNW’s ‘Riker’, so it seems inevitable ‘expert flirt’ will be added to the list!

Hemmer’s addition in last year’s character reveals came out of the blue and was a welcome surprise. Played by a legally blind actor (and artist) Bruce Horak in only his second TV role, Hemmer is an Aenar. Aenar’s are a subspecies of Andorians, blind from birth but with powerful telepathic abilities that compensate (or are superior according to Hemmer).

Hemmer is another character who appears to be new to the ship, with a scene showing the Aenar beaming in. He’s also a self-professed genius when it comes to engineering. While not explicitly stated we can see his rank is Commander, so it’s likely he is also the new Chief Engineer.

And Hemmer is certainly not without many of the traits we’ve come to associate with Andorians and Aenar. He seems to lack a filter, speaking his mind in a matter of a fact manner. It might be a little arrogant at first, but it’s not hard to immediately warm to this character. He’s clearly got a ton of personality. Hemmer believes his purpose is to “Fix what is broken”, something that may not only apply to his role in engineering!

Babs Olusanmokun takes on the role of Dr. M’Benga. A Star Trek: TOS character originally played by actor Booker Bradshaw. Casting listed the character with the codename ‘Biodun’ but also noted his TOS roots. The doctor was described as “a close advisor to Captain Pike, who has an air of easy erudition”. It seems that M’Benga will also be taking on some of the characteristics of his peers McCoy and Boyce in his relationship with the Captain.

We’ve already got a bit of a head start when it comes to a sense of this character. He is an expert in Vulcan physiology, having studied and worked on Vulcan for several years. Useful skills to have with Spock on board.

The teaser shows M’Benga also has other things in common with Enterprise CMOs – an appreciation for old school medicine (ground sea urchins to be precise). He also has a deeply embedded sense of empathy and morality, noting in voiceover that “prejudices kept people from helping each other for centuries. Disease and suffering could be things of the past.”

Unlike Number One, who’s future has not officially been explored post-Pike’s command, we know where M’Benga’s will lead. How he goes from CMO to McCoy’s subordinate on Kirk’s Enterprise is already a hot topic for fans. CMO is a command position but not his rank (Commander). It comes with all the extra managerial and command responsibilities on top of being a practicing physician. These fixed points in canon will likely affect how M’Benga’s character development takes course over the series, just like Pike’s.

Incidentally Babs Olusanmokun is an expert in Brazillian Jujitsu, and isn’t new to the action genre recently appearing in movies Wrath of Man and the spectacular Dune. We do see the doctor go off-world in the teaser, so with luck, Babs will get to put those badass credentials to good use!

Another left field add revealed Nurse Chapel as a member of the crew, played by Australian actress Jess Bush. Again, casting used a codename calling the character simply nurse ‘Miller’. Chapel was the role Majel Barrett-Roddenberry moved to after ‘The Cage’ was rejected. Number One was the actresses preferred role, being groundbreaking for the time. But that didn’t stop Majel creating a memorable character in TOS.

Chapel is described as ​​”heroic, charming, free-thinking, and “the beating heart” of sickbay” and that certainly comes across loud and clear in the her teaser. She’s forthright when asked questions, but with a twinkle in her eye. And when the ship appears to be boarded by hostiles, this nurse isn’t afraid to kick some ass too.

And perhaps most controversial (for some), she’s clearly not wasting any time pursuing a certain pointy-eared science officer. From The Original Series, we know that Chapel had a serious, and sadly unrequited crush on Mr. Spock. For Strange New Worlds, it seems we’ll see some of the history of those feelings explored.

While not a lot of details have been released, two additional support characters also popped up in the teasers. And there are some clues as to how these characters will fit into Pike’s Enterprise Crew.

We know from the IMDB cast listing that André Dae Kim will play the role of ‘Chief Kyle’. This may be another legacy character added from The Original Series, (originally played by actor John Winston). Kyle is the Transporter tech whom we see interact with Hemmer. Very little else is known about this character but with appearances in 7 episodes for season 1, hopefully, we’ll get to know a little more about him.

Actress Rong Fu is also listed for a number of episodes as ‘Lt. Jenna Mitchell’. We see her sitting at the nav position next to Lt. Ortegas. Number One also appears to take this seat, so Mitchell will likely occupy the chair when Una’s duties take her elsewhere.

A lot to take in from six fantastic character teasers! What do you think of Pike’s Enterprise Crew so far? Catch our latest video below, where you can comment & let us know!

Where can I watch?

Star Trek: Strange New Worlds will premiere on May 5 on Paramount+ for the US, Australia, Latin America and the Nordic countries. Plus on the CTV Sci-fi Channel & Crave in Canada. International release information is TBC but it’s likely the series will be rolled out along with Paramount+, as it continues its expansion globally.