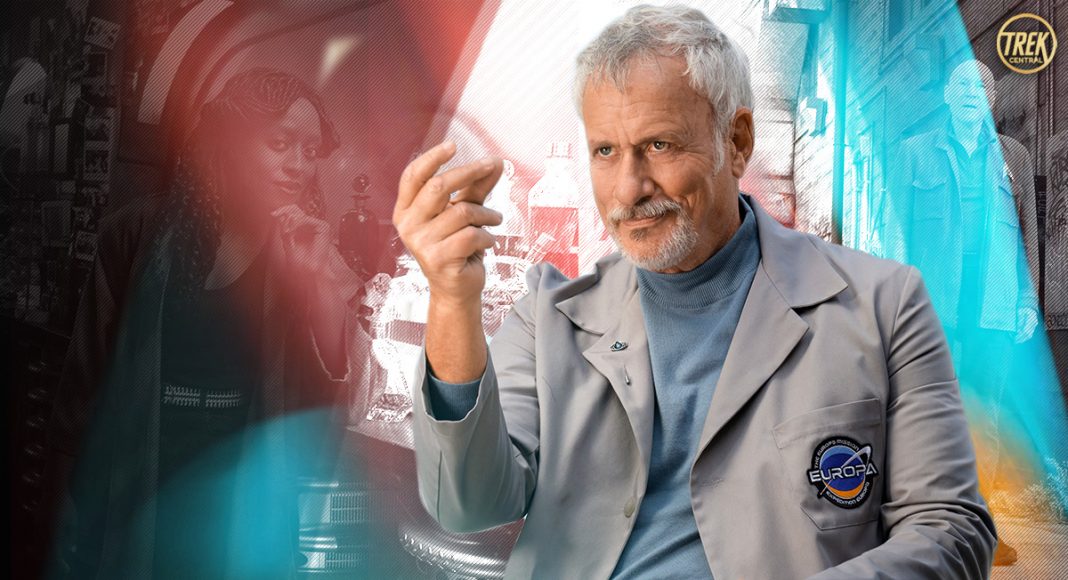 This week’s episode of Star Trek: Picard is ‘Watcher’. Written by Juliana James & Jane Maggs (Teleplay), and Travis Fickett & Juliana James (story by), and by directed by Lea Thompson.

With their “present” now set in 2024, Picard and crew find themselves separated and tasked with repairing the future. As has been the case thus far this season. Star Trek: Picard ‘Watcher’ picks up immediately after the events of the preceding episode. Raffi and Seven are still hot in pursuit, but now in search of Rios, who has been taken into custody by ICE officers in Los Angeles. But their mission to find the mysterious Watcher is not altogether halted. Admiral Picard instead finds himself tasked with this, and he does so with Guinan’s help. Only Guinan doesn’t seem to recognize Picard. There are lots to unpack here, so let’s dive in.

An Answer to a Longstanding Fan Curiosity

With La Sirena’s power still low, Picard and Jurati take refuge in Chateau Picard, which in 2024 is abandoned. We learn that the property has been empty and neglected for nearly a century, since World War II when the Picard family moved to England. While not overtly explained, it can be inferred that this is the reason that Picard, a Frenchman, has had an English accent all these years. The accent must have passed through the generations. I’m not sure this particular character quirk needed an explanation, but it worked in naturally with the episode’s plot.

While at the Chateau, Jurati keeps referencing the number 15, albeit unconsciously. Picard picks up on this and comes to the conclusion that they have only three days – until April 15 – to stop whatever it is that will send Earth on a path of the totalitarian regime that the crew found themselves in after Q interrupted the Stargazer’s destruction. With coordinates from the Borg Queen, Picard beams to a familiar location: 10 Forward Avenue in Los Angeles. He thinks he has found the Watcher, his longtime friend, Guinan.

Guinan appears drastically younger, which leans into the fact that El-Aurians can depict age differently than humans. Guinan is jaded.  She’s packing up her bar. Picard admits that he knows that she is not human, a point that makes Guinan “time sick”. She admits she’s not human, and desperately wants to leave Earth. She accuses humanity of actively destroying each other and the planet. The commentary isn’t subtle, and perhaps it shouldn’t be. On a more confusing front, Guinan doesn’t know Picard. And she should. Right?

Let’s take a little detour back to The Next Generation days. In the classic two-parter, “Time’s Arrow”, the Enterprise-D crew find themselves back in the 19th Century, and lo and behold Guinan is there, too. This episode establishes that it is in the 1800s during this time travel mission that Picard and Guinan first meet. Their special relationship is not bound by normal space-time. Given this time travel plot takes place in 2024, Guinan should know Picard, remembering him from a century-plus earlier. Except that she doesn’t.

There’s a lot of smart time-travel/alternate timeline shenanigans going on here. In essence, the Picard that Guinan knew does not exist. In 2401, Q changed the present reality. Only Picard and crew were aware of this change. In the Confederate state, Picard never captained the Enterprise-D. And thus, he was never on the mission in “Time’s Arrow” that sent him to the 19th Century and met Guinan. So while the normal Federation and Confederation share a past up until some unknown event on April 15, 2024, the Picard-Guinan relationship is still changed.

Picard is convinced that Guinan is the Watcher, and thus in an attempt to solicit her help, he reveals his identity. The vocalization of his name alerts whatever special space-time awareness El-Aurians have. Guinan helps, but admits she is not the Watcher. But she takes him to where the Watcher is.

With Picard taking over to find the Watcher, Seven and Raffi are desperately trying to find Rios. They arrive at the clinic he was being treated at, only to discover that he has been apprehended. The pair find themselves at the desk of an unhelpful LAPD station, realizing that Rios isn’t being held there, but by immigration police. The natural dynamic that Michelle Hurd and Jeri Ryan share onscreen helps keep these sequences alive, but it does feel like they spend a lot of time in a vehicle somewhat aimlessly. With a few nods to LA traffic woes, it likewise feels that this part of the episode is stuck trying to get from point A to B. There’s a lot of car chases that ultimately go nowhere, as Seven and Raffi are conveniently beamed away and to Rio’s location.

Rios carries the brunt of what 2024 has to offer. He’s detained and then separated from Dr. Teresa, who is released from custody. And then he finds himself on a deportation bus, certainly to be rescued, one way or another, in a future episode.

I found this B-story to be a bit repetitive. While fun at times, and aided by a Voyage Home cameo for a little extra laugh, this series of sequences seemed to circle and not have a lot of momentum after the first few minutes. And it begs the question of why they couldn’t have just got Rios’ location from the Borg Queen sooner. And, for that matter, why the Borg Queen couldn’t have just directed Picard to the Watcher immediately, instead of having a detour with Guinan. For the first time this season, an episode seemed a bit unfocused at times.

Yet we are still rewarded with fun character moments and a story that still moves forward. This in no way is a filler episode. Significant steps are taken, and thankfully the Watcher mystery has (largely) been resolved. There are a lot of important steps that are taken, but “Watcher” does meander at times.

A Presence with the Queen

In what I would describe as the C-story, Jurati and the Borg Queen continue to offer up what is a compelling dynamic, and what seems to be the making of an interesting relationship. Leaving Jurati alone with the Queen seems like a strategic misstep given her near-assimilation last week.

Jurati appears to maintain a warranted fear of the Queen, but she definitely isn’t brushing off any of the Queen’s inquisitive advances. I don’t know where this storyline is going, but I’m here for it.

Guinan takes Picard to the Watcher, or at least to people who get him there. In a series of horror-like encounters with individuals who eyes turn pure white, Picard finally meets this mystery figure. And it turns out to be a human version of Laris. The two vanish together to an unknown location. What comes next remains to be seen. Guinan uses some curious language to describe the Watcher. It’s going to be quite the week of Trek canon theorizing.

In an unconnected element of this week’s story, “Watcher” ends with Q in 2024, reading a newspaper and talking about a nearby sitter. We know nothing of the woman Q is focused on, but she certainly will be of importance, as Q’s commentary insinuates that her actions, her mentality, will be of vital importance. But as Q snaps his finger as to disappear in his normal fashion, he goes nowhere. He remains there befuddled, seemingly without power.

I continue to enjoy the sparingly used Q. He pops in when needed for Picard, or to add intrigue to the story. “Watcher” is the most obvious clue thus far that something is not right with Q. There’s been a seriousness to him that has set his presence apart from those in previous Star Trek iterations. Is Q dying? Was the last of his power spent trying to help Picard and crew? I can’t wait to see what’s next for this character.