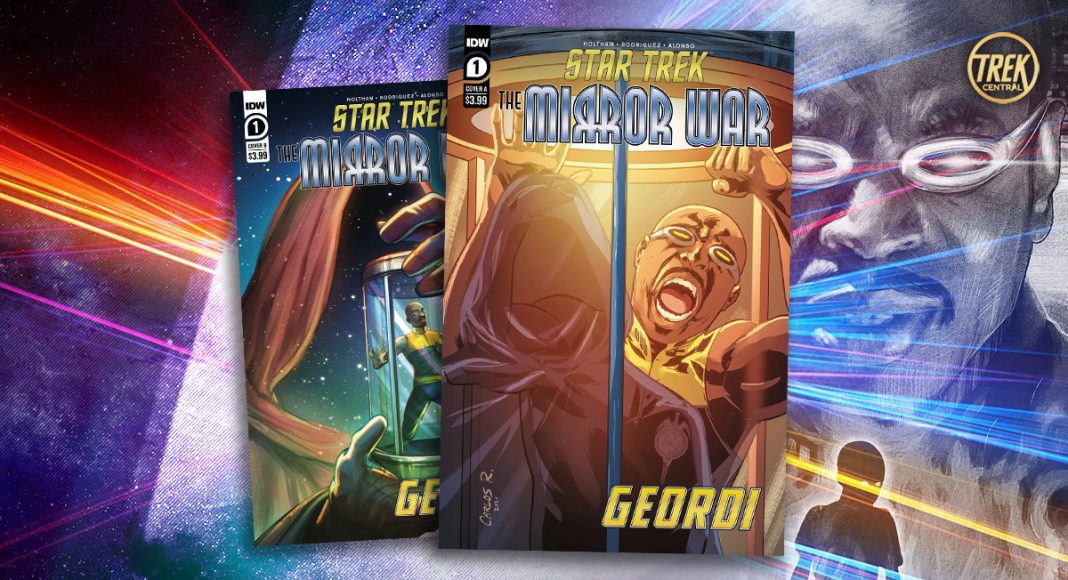 IDW’s Star Trek: The Mirror War – La Forge #1 is an exciting look into Geordi La Forge’s life in the mirror universe. Serving as a companion piece to and set during the events of the ongoing IDW story of The Mirror War. La Forge #1 gives an interesting backstory to the mirror version of Geordi. It shows how he became the person he is today but mirrored.

The primary theme of the issue is how Geordi’s blindness created his antagonistic outlook on the world. Since he was born blind, he struggled immensely as a child, making him bitter and angry. It appears in this universe Geordi wasn’t given artificial eyesight until later in life. So as a child he had to struggle without the use of his eyes. He was bullied by other children and his parents never gave him the love or compassion he needed. This all resulted in Geordi deciding that the only way to live was by hurting other people to make sure they didn’t hurt you first.

We see this theme further demonstrated later in Geordi’s life when he worked at the Utopia Planitia Fleet Yards. Here we see Geordi meet a new character, Gwen Lui, with who Geordi had a budding romance with. Their relationship has a rocky start. Geordi instinctually distrusts Gwen’s romantic advances, but he eventually gives in to his desires. But even after he lets his guard down, he ends up betraying her to secure his place in the Empire. Geordi forgoes a real relationship and a real chance at love just to protect his own skin. To avoid an attachment that in his mind, would make him weak.

This is obviously the polar opposite of the prime universe Gerodi, but that’s exactly the point. This mirror universe is a reflection of the characters we know. Prime Geordi values his relationships and believes they make him stronger as a person. While Geordi is not the most successful in finding romantic love, he always keeps searching for it because he knows what it means to him. His friendship with Data and the rest of the Enterprise crew allows him to be the best version of himself.

This is an excellent story that gives more insight into Gerodi’s mirror character than any previous mirror content before it. The issue is wrapped in an interesting present-day frame narrative that gives context for these flashbacks and how they inform Geordi’s future. Hopefully, this is not the last in the La Forge series, as there is so much of Geordi left to explore.

Star Trek: The Mirror War – LA Forge is on-sale via IDW Publishing’s website. All good comic book stores should be stocking it by now as well.

Check out our review of IDW’s “The Best of Picard”. Catch all our Star Trek comic news, reviews, and more via our comic book category! Comics master, Jacob, will be back with new reviews very soon. Keep up to date with the latest IDW Publishing news, right from Trek Central.