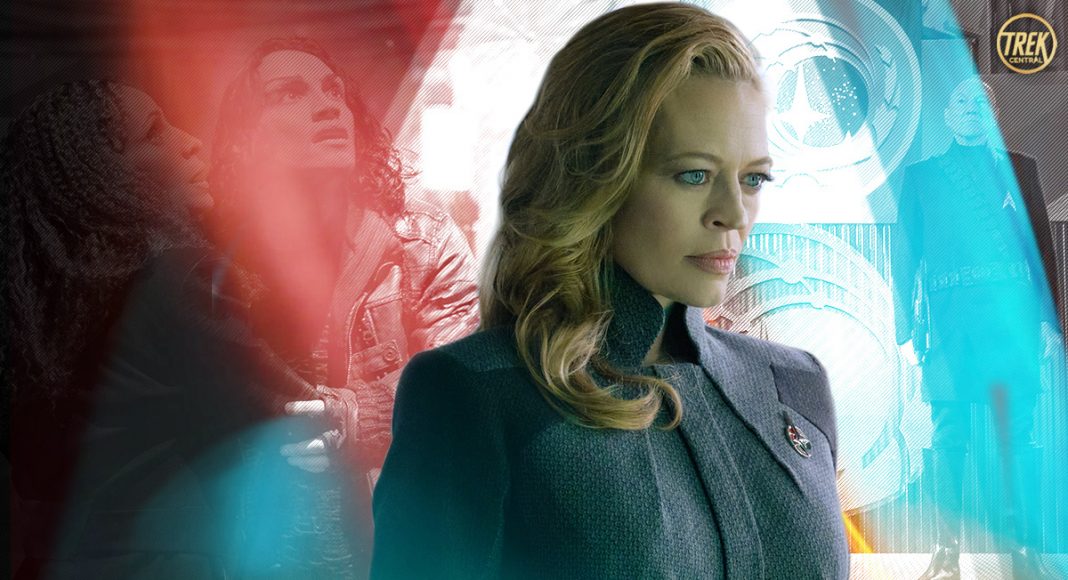 The second episode of Picard picks up immediately after the game-changing event of the premiere, with Picard and Q in the altered version of Chateau Picard. And the story doesn’t miss a beat. “The Star Gazer” left quite a high bar, and thankfully “Penance” doesn’t disappoint. In fact, the two work wonderfully as a pair. Whereas “The Star Gazer” set the tone and theme for the season, “Penance” establishes the rules that this season will operate from. So let’s dive in.

The World According to Q

The opening act of “Penance” is an acting tour de force between Patrick Stewart and John de Lancie. We all know of the longstanding relationship between Picard and Q. It’s not one that can be easily summed up as friendship or enemy. Instead, I like to think that Q is Picard’s gadfly: always hovering around and occasionally popping in to sting Picard for a lesson. Here, though, Picard and Q aren’t messing around. They haven’t seen each other since The Next Generation series finale, “All Good Things”. Picard is older, more frail. He’s annoyed at Q’s presence and haunted by what Q has brought forward. He clearly doesn’t want part of Q’s games.

Little does Picard know that Q is not playing.

Q’s classic smirky and quippy lines remain, but he’s not playing a trumpet on the bridge or pawning his son off on a starship crew. He’s more serious. There’s a sinister tone to Q this time around. He even surprises Picard with a backhand to snap him into the realization that this is no mere visit. I don’t know if Q’s actions are nefarious, but they are certainly serious. Picard picks up on this, and questions if Q is unwell. Perhaps Q is sick or threatened. Whatever the reason, Q insists that unlike their previous interactions, Picard is more than a pawn in the altered reality; It seems as though he is a central figure in whatever is going on, and will be key to fixing the events.

And with that, we come to know that this is no mirror universe. Something happened to bring this dark present to be a reality. And it can be fixed.

The Villain Within Us

General Picard of the Confederate is a hero to an earth-centric totalitarian government. It is told that the Confederate has conquered in wars against the Cardassians, the Klingons, and the Romulans, amongst others. He has skulls of his enemies in his home (RIP to this version of Martok, Gul Dukat, and Sarek). General Picard is the man we should loath. The same can be said for Confederate President Annika Hansen and the other versions of the La Sirena crew. Q makes clear that this is who our heroes are now.

It’s dark. I’ll admit, I was worried about this particular element of the season, as it has been previewed in trailers. I don’t enjoy the “mirror” episodes of the original series, and the follow ups in Deep Space Nine, Enterprise, and Discovery. There’s a campy vibe to those stories that just hasn’t worked for me. While there’s some element of camp in “Penance”, it’s largely self-serious. It demonstrates that many of us could be our worst nightmare if things were just a little different.

In a moment where Picard is dismissive of the notion that he could have slaves of another species, Q factually points out that Picard has had these slaves. That’s who Picard is in this reality. In this sense, our hero is also our villain, and we are forced to reconcile that this distinction between the two may not be as removed from each other as we’d like. I hope that this theme continues to be explored as Picard and crew fix the past to repair the future.

We are rapidly introduced to where the La Sirena crew is in this altered reality. Seven is Confederate President Annika Hansen, and in this reality was never assimilated by the Borg. Rios is in command of La Sirena again, and leading a squadron against Vulcan. Elnor is part of a Romulan resistance force, similar to what we’ve seen with the Maquis or Bajoran resistance. Raffi is hunting that group.

Dr. Jurati is a scientist preparing the Borg Queen for execution (more on that later). All become aware that this reality is not right, and eventually find their way together. Some of this dragged the story down a little bit. In the prior episode, we were introduced to these characters after the gap between seasons. This episode does something similar, but with their altered selves. I understand that’s needed from a plot perspective, but it did feel repetitive at times given the story of the preceding episode.

The highlight, though, was Seven, who through a series of investigative and calculated moves navigated this augmented reality with precision, and was critical to bringing everyone together. It was similar to the Seven of old, the one we knew in four seasons of Voyager. It was wonderful to see this side of her again.

All Hail the Queen

Any review of this episode would be incomplete without discussion of the new Borg Queen, now played by Annie Wersching. Alice Krige and Susanna Thompson previously played the character in Star Trek: First Contact and Star Trek: Voyager, respectively. Both of those performers leaned into the same interpretation of the character, but Wersching is intentionally different, here playing the role as a captive rather than the powerful figure that we’ve seen before.

Wersching is fantastic, and immediately creates an empathy for a character that has often been feared. The fear still exists, though, specifically for Picard and Seven who have had their identities stolen by the Borg. I’m curious to see what role this character will play throughout the season. Admittedly the character is here convenient for the plot, and directly outlines when and where Picard needs to be to repair the timeline. It’s a plot device that I’m willing to overlook, because Wersching is fantastic in the role and no Star Trek time travel story is without its plot holes (the Borg showing up the day before first contact, anyone?).

The episode concludes with Rios rescuing Picard, Seven, Elnor, Jurati, Raffi, and the Borg Queen with the plan to travel back in time and repair the future that they know. This escape is not easy, as Annika’s husband in this version brings a security team to board La Sirena and stop Picard, Seven, and the crew. Elnor is shot with a phaser in the chest, and severely it would seem. But the episode ends with the crew being held at phaser point. It’s yet another cliffhanger, and one that leaves me wanting to know what’s next.

“Penance” works well with “The Star Gazer” as a hand-in-hand introduction to this season. Whereas last season’s first few episodes seemed to plod along somewhat aimlessly with different plot points, the second season seems singularly focused and confident with the story it wants to tell. I find myself overwhelming curious as to what the story for the season is going to be. Most excitedly we are back with characters we care about with stakes that feel personal while being galactic.

Picard finds himself transported to an alternate timeline in the year 2400 where his longtime nemesis, Q, has orchestrated one final “trial.” Picard searches for his trusted crew as he attempts to find the cause of this dystopian future. Star Trek: Picard Season 2 returns with Episode 2, “Penance”! Trek Central’s Captain Jack returns to talk all the details! Star Trek: Picard ‘Penance’ is LIVE now in all regions!