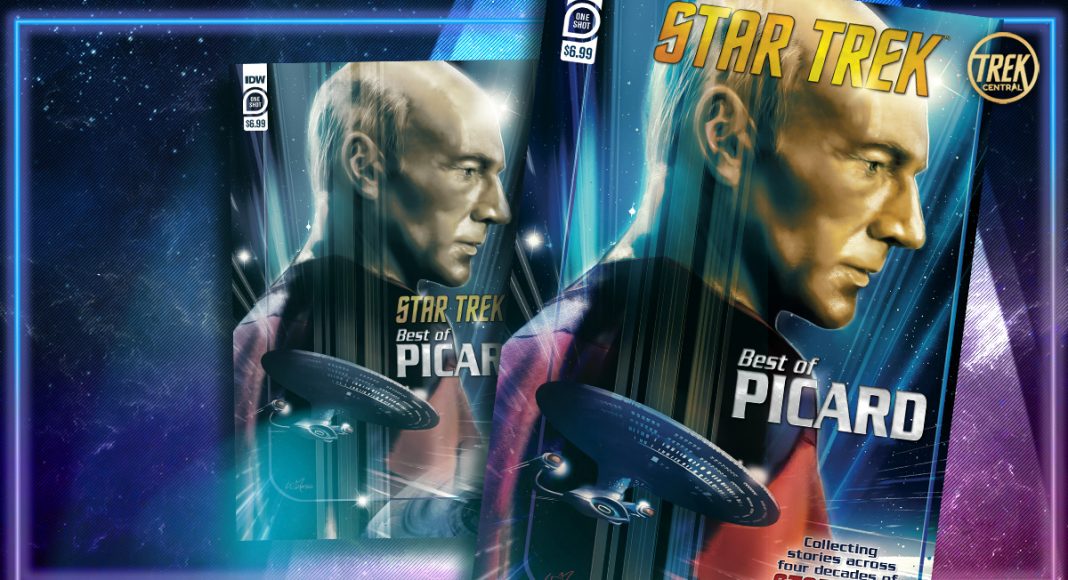 The Best Of Picard!

With Season 2 of Star Trek: Picard just over a month away, there is no better time to celebrate the life and times of Jean-Luc Picard. IDW’s Star Trek: The Next Generation: Best of Captain Picard collects four adventures featuring Captain Picard in a 100-page extra-long issue. These stories span across four decades of publishing, from IDW all the way to DC Comics.

The first of the issue’s stories include The Q Conflict #1, a recent miniseries by IDW in which we see a crossover between Star Trek: The Original Series, Star Trek: The Next Generation, Star Trek: Deep Space Nine, and Star Trek: Voyager, all thanks to the eponymous Q. This story is a rare opportunity to see all the characters from all the different shows interact and go head to head.

DC Originals: TNG #1: Return to Raimon Part 1, published all the way back in 1989, is the most unique of the four stories, created when the Star Trek universe was a lot smaller. Featuring the most unique art style of the four stories, Return to Raimon tells the story of Picard’s dealings with the mysterious Raimonians, and the murder-mystery they find themselves wrapped up in.

Finally, Picard #1, released just before the first season of Star Trek: Picard, explores the period before the destruction of Romulus, when Picard was an Admiral attempting to evacuate and relocate the Romulans in harm’s way. This series sets the important context for the events of Picard, and is crucial reading to fully appreciate the events of the show.

Each of these four stories provides interesting and unique looks on Picard’s life across different time periods and universes. Check it out if you want to get caught up on Jean-Luc Picard before his story continues in just a few weeks.

Excited for Star Trek: Picard Season 2? Follow us on social media for your latest news. Watch our breakdown of the Season 2 Official trailer via YouTube for all the details. Check out IDW Publishing’s upcoming comics for 2022!