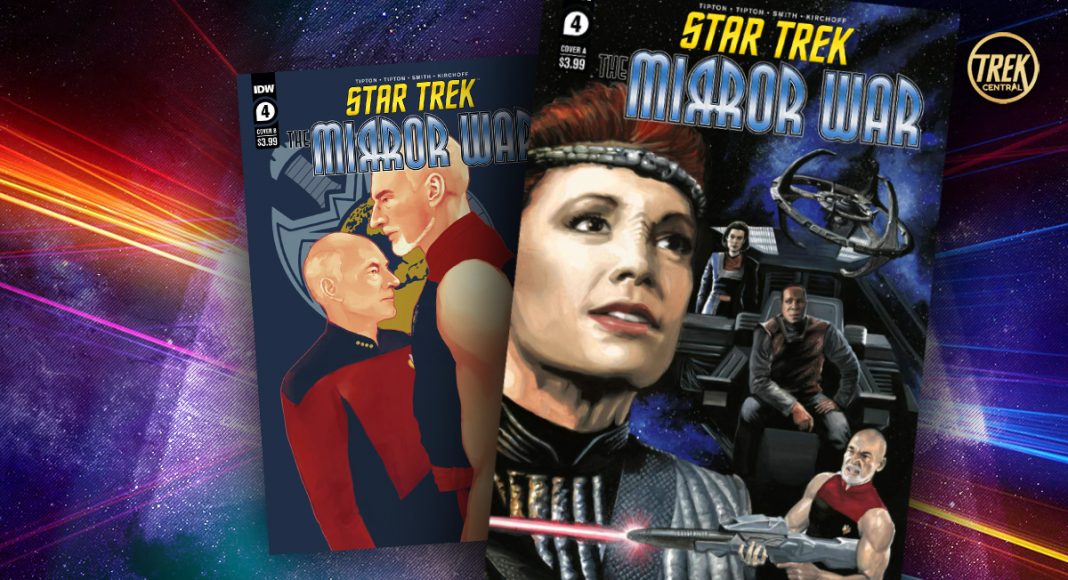 IDW’s Star Trek: The Mirror War returns with an action-packed fourth issue. When we last saw the mirror crew of the Enterprise-D, they were on their way to the ship-building planet of Faundori to conquer it and use its resources to build a fleet that will return the Terran Empire to its former glory.

The issue starts off with imagery rarely seen in the Star Trek universe: 1970s America. On the holodeck, a leather-studded Jean-Luc Picard races down the hilly streets of San Francisco in a classic black muscle car. Quite the contrast from our prime universe Picard, who enjoys classy detective adventures in the 1940s. But the joyride soon turns into an assassination attempt as a rogue officer chases down Picard with his own car. Picard outsmarts him, hitting his car and sending him into a violent crash. A rambunctious start to the issue.

Later, we see Geordi speak with Ensign Gomez in Engineering. It is always strange to see the mirror counterparts of our known characters, but hers is especially jarring. She is so kind and innocent in the prime universe that one can only imagine how she acts in this universe. We don’t get to see too much of her in action, but hopefully, she returns soon. The character has gained recent relevance from her small cameo in Star Trek: Lower Decks, so it is fitting to see her here as well.

We then see Commander Riker plant the seed in Geordi’s mind that Captain Picard is not fit for command due to his reckless behavior on the holodeck. This has been a plot point that has been developing for a few issues now, with Riker poised to challenge Picard for the captaincy. He’s already got Troi on his side, and perhaps now Geordi. If he gets enough crew members behind him, his challenge may have the support of the crew.

Since the Enterprise had to drop out of warp due to Picard’s holodeck incident, the ship is found by Worf, who has been pursuing them since the last issue. A chaotic battle ensues, and it looks like the Enterprise may be out-matched. But they are saved at the last minute by mirror Benjamin Sisko and Ro Laren, who are under orders from Intendant Kira Nerys to disable Worf’s ship. The mirror Deep Space Nine characters were introduced in the last issue but have not yet been fully utilized in the story. Hopefully, we start seeing them more as they provide an interesting contrast to the Enterprise characters.

The final act of the issue involves the conquest of Faundori, which shows our characters at their most brutal, killing innocents and laying waste to cities. We see Reginald Barclay lead a surprise attack against the Faundori with Commander Data, coming in with the facade of a business offer, but ending up serving as the harbingers for an invasion force. The Faundori don’t seem to put up much of a fight, and it’s not entirely believable that the Enterprise would be able to conquer a whole planet through just attacking one city, but nonetheless, they do. The issue ends with Picard with his feet up, now in charge of Faundori operations, on course to finally get his armada.

While this was an action-packed issue, it lacked any meaningful character developments or large plot points. Yes the Enterprise conquered a planet, but they took it so easily that it didn’t feel like much of a challenge. There was never any doubt they’d fail. Hopefully, in the next issue we get more into the effects of conquering Faundori and how it will advance Picard’s goal of Terran domination.

Check out our review of IDW’s “The Best of Picard”. Expect the upcoming comic, Star Trek: The Mirror War – Geordi, out March 2022.