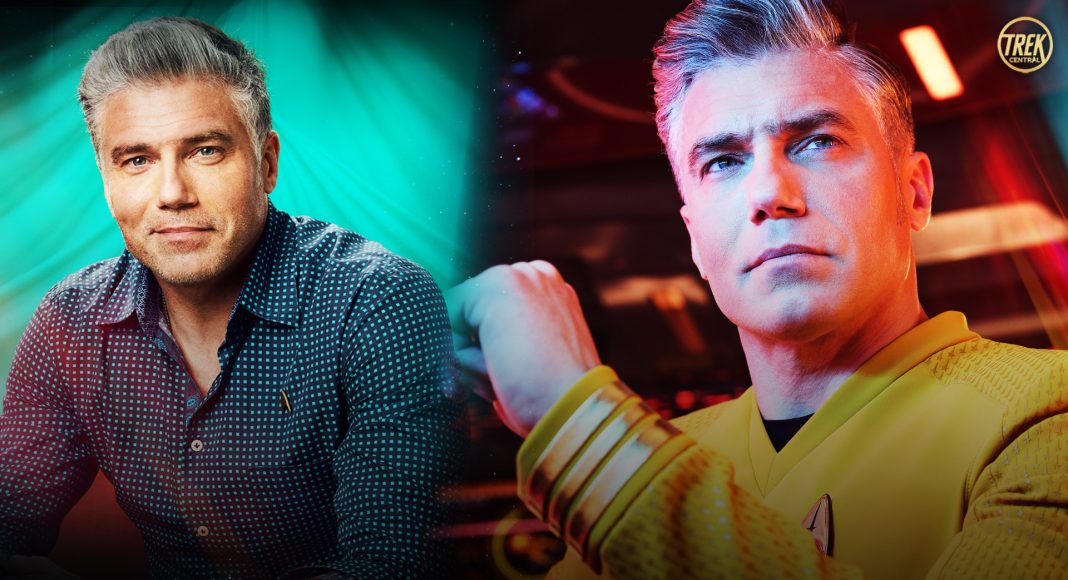 Star Trek is going big in 2023! While we’re saying goodbye to Star Trek: Picard, we’re waiting for more adventures in Star Trek: Strange New Worlds. Thankfully, as we wait, we’ve got some details about the upcoming second season. While attending Wales Comic Con in December last year, Anson Mount sat down to chat with us. Additionally, we also spoke to Ethan Peck and Christina Chong. Keep an eye out for those interviews later on.

You can watch the full interview in video format below. However, some snippets from our conversation with Anson Mount are here to read. Speaking with Anson, we touched on the upcoming second season and what it was like having a younger Captain James T. Kirk, on the Enterprise. Additionally, we also touch on the upcoming Star Trek: Lower Decks crossover event that is due to happen.

Anson Mount On The Reaction To Strange New Worlds

Naturally, leading your own Star Trek series is a daunting task. While Anson Mount did appear as Captain Pike in the second season of Star Trek: Discovery, that show still had its core focus. However, Strange New Worlds is the Pike show that many wished for. Therefore, meeting fans’ expectations will always be on your mind. We asked Mount what he thought of the reception of Strange New Worlds.

When we shoot these things, and particuarlly this one because we shot it during the lockdown when we didn’t even have network oversight. We were just sort of there and look each other and go “felt okay”

Of course, when you’re making series and films, it will be a long wait before you see the reaction. Strange New Worlds shooting in lockdown also added to the wait time.

So much of the joy of doing this is kind of of that when you bought a present for somebody and you’re wrapping it, you think they’re going to like it but you’re not sure. You can’t wait to see them open it. there is a lot of that Christmas wrapping joy in what we do. It’s been really gratifying in getting this feedback.

We’re all looking forward to Star Trek: Strange New Worlds Season 2. Thankfully, as Anson Mount Talks Star Trek in our interview, we had to ask him about it. One of the most anticipated elements of the second season is the crossover event. Star Trek isn’t a stranger to crossover events. For example, Doctor Bashir (Alexander Siddig) appeared in The Next Generation. Additionally, Captain Picard (Sir Patrick Stewart) starred in the first episode of Deep Space Nine. However, Strange New Worlds is taking a different route, crossing over with animation.

Yeah i’ve never done that before (animated crossover). there are a few things in that episode that are new to a lot of us, new to trek. I’ve known Jack (quaid) for awhile now. We met at a convention and had a blast! It was really fun to get him on the show. Adding Tawny to that group who just, i don’t know if you know this but she is like an encyclopedia of trek, she is amazing.

Season 2 of Star Trek: Strange New Worlds will also see more of Paul Wesley as Captain James T. Kirk. However, the legendary Captain has already made his debut appearance in the Star Trek prequel series. He appeared in the season one finale thanks to an alternate reality episode and some timeline shenanigans. However, this was a big moment given that Captain Pike met his successor to the Enterprise chair. So how did Anson Mount find this?

Paul walked onto the show and was immediatly apart of the family. He is such a good egg, great sense of humour and does not take himself seriously at all. He’s there for the work. First of all Trek is a different fitting kind of suit. You’ve got to work your way into it, particuarlly our show. He really rolled with the punches and we had a great time with him.