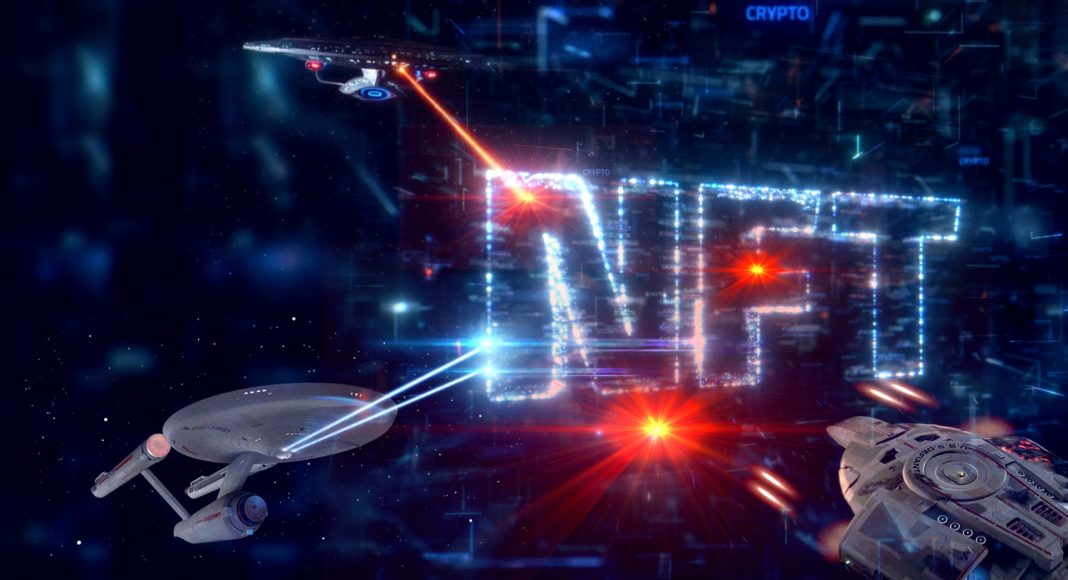 Star Trek NFTs? Do. Not. Want.

The official Star Trek Twitter is once again attempting to promote NFTs to fans with partner company RecurForever. The replies are not being shy about how that makes us feel. And it goes without saying that as part of the Star Trek community, we do not want NFTs. They are the antithesis of Trek’s values. So how did we enter this dark frontier?

Many Trekkies have already been extremely vocal in rejecting Star Trek themed Non-Fungible Token (NFTs) projects so far. Yet, despite the backlash, Paramount continues to pursue them. They have partnered with the company RecurForever who, over the last few weeks, have been contacting fan accounts. RecurForever offered to ‘partner’ with us, and now they’ve even got a booth at Mission: Chicago.

Some of you might be asking, ‘what the heck is an NFT?’. If so, we highly recommend checking out The Verge’s thorough explanation. Essentially they are controversial ‘unique virtual items’. They can be anything from a tweet to a meme, to an original piece of digital art. Kinda like a one-of-a-kind trading card, only they don’t physically exist.

Last November the official Star Trek account promoted a Funko NFT partnership which was met with incensed backlash. Before that the Roddenberry Foundation planned NFTs as part of the Centenary project which again, fans pushed back on.

IF AT FIRST, YOU DON’T SUCCEED

You’d hope the feedback would have been taken on board by Paramount, but sadly it fell on deaf ears. Several weeks ago we reported a trademark was registered for Star Trek NFTs. And now those NFTs are here and looking to stay it would seem.

Paramount is working with a new NFT company called RECURForever. As mentioned above, that company has been reaching out in DMs to fan accounts offering to ‘partner’. When making their offer, RECURForever was clear about what the partnership was for, but not what it would involve. We responded to find out more and discovered that to get that information, we would have to sign an NDA and arrange a phone call. That lack of transparency felt unsettling, to say the least.

And to be clear we had no plans to take up the offer because NFTs, to use a technical term, suck. Trekkies are not the only fandom pushing back. Music and gaming fans have been doing the same. Even Forbes has been reporting the mass backlash against NFTs.

NFTs’ negative environmental impact, the potential for misuse, and their ‘emperor’s new clothes’ mentality are just three reasons. But corporations are still jumping on the bandwagon, spying on a lucrative opportunity.

Sure we love our t-shirts, ship models, and other tangible items, but NFTs are not tangible. Also, as an example of how morally bankrupt we find them, Twitter founder Jack Dorsey recently sold his first tweet as an NFT for $2.9 Million. Yes, a tweet. It’s baffling and depressing.

DO I REALLY OWN AN NFT?

We found this a complicated question to answer. By all accounts, our research said no, you no more own it than you do a digital download of a song or movie. When you buy an NFT you buy the ownership of metadata, but not the item itself. So essentially you’re paying $$$ to have a digital item accessible on a server, but with the privilege of your name buried in the code. How many of us would actually go look at that code?

The appeal is supposed to be that these items are unique. But are they really? If you get a cool image and share it with a friend who saves a copy, is that then unique? You also can’t print it and sell copies. You can only sell that item (or rather its metadata) in an exchange to someone else. So where is the appeal beyond some sort of virtual sense of privilege?

Not only are we at an unprecedented time of climate crisis, but there’s also a looming energy crisis. Some NFTs claim to be ‘eco friendly’ but when studies have looked closer, the numbers don’t always add up. A recent article by Music Ally gives insights into this. Some also use ‘carbon offset’ schemes. Greenpeace certainly do not think these do any good. It feels like the equivalent of taking a crapping in the bath, then fishing out the turd before taking a bath in that same water. Do you really want to bathe in that?

And the more NFTs are engaged with, the more they are seen as lucrative, and the more corporations will seek to sell. The more NFTs, the greater the environmental impact, and so on.

CAN WE MAKE A DIFFERENCE?

Yes, we believe we can. If our fandom continues to stick together, and uphold the Trek values we hold dear, then maybe, eventually Paramount might get the message. Gaming and Music fans have been doing just that and succeeding. We really hope that Paramount will listen to fans, and actually hear our concerns around NFTS. And that they follow what others are now doing, take note of the backlash and stop pursuing them.

Trek Centralhttp://trekcentral.net
A creative at heart, when not seeking ways to insert “Faith of The Heart” into anything, Jack leads Trek Central’s operations in developing the brand and ensuring quality content is always delivered.