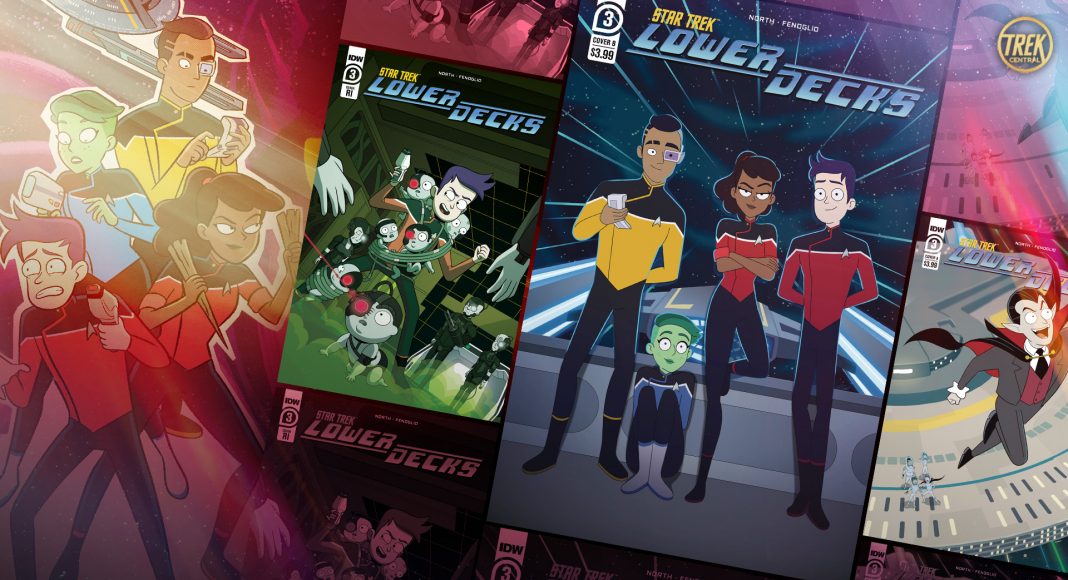 A satisfying Starfleet-Style conclusion to this Star Trek: Lower Decks comic series. Lower Decks: Issue #3 improves the previous issues as it goes! The last two issues dealing with a sentient Dracula and a second contact went wrong. The third issue weaves them nicely together to conclude this arc.

Too and Fro with Dracula

As this is a conclusion to the previous two issues of this series, giving us our first arc of the Lower Decks comic, what happened in the previous issues? Well, our lower deckers were messing with the holodeck. In the first issue, this accidentally made a sentient evil Dracula, which restarted and seemed evil. Then our lower deckers convinced Dracula to be good and drink replicated blood until it tasted Rutherford’s blood and went evil again.

I was not too keen on this back-and-forth between evil and good for Dracula in this comic series. However, Lower Decks: Issue #3 more than makes up for it. Spinning a nice Star Trek Narrative into the mix in a very interesting way. Dracula, in the end, does become good in a somewhat satisfying series of events.

How Dracula manages to be a menace to the ship, more so than Moriarty in some aspects, is to alter his own program to give him the knowledge of the Cerritos. This is actually an interesting way to do this story. Therefore, setting it apart from the Famous Moriarty, this is obviously inspired. With this knowledge and the use of the holodeck, Dracula slowly tries to hack the ship to take control of it.

Boimler actually somewhat gets a solution to save the day, trusting in Dracula and getting him to negotiate with them. For a small amount of blood, Dracula will assist the Cerritos in dealing with the Qvanti. Boimler actually gives a nice speech about trusting in others, and we all change from who we previously were.

So as we saw in previous issues, the Senior officer plot story of this comic arc is accidentally making first contact with a faction stuck in the Dark Ages on a planet. The Yentoa, instead of the second contact with the Qvanti on the same planet. Somewhat confusing, but we get a classic Star Trek court scene. This is something done well previously in Lower Decks in the episode “Veritas”.

Our senior officers are in breach of the Qvanti’s own Prime Directive. A nice touch is seeing Shaxs muzzled in the background considering the previous episode and how he single-handedly incapacitated an entire town’s worth of people.

Dracula to the Rescue

But the best aspect of Lower Decks: Issue #3 is how our two plot threads link together, with a now-good Dracula with a negotiated allowance of Blood wanting to help save the day! Rutherford even creates a quite cumbersome Mobile Emitter, similar to the Doctors from Star Trek: Voyager. With Dracula wanting to help, our Lower Deckers devise a plan.

Their plan involves throwing Dracula’s Mobile Emitter through the Qvanti’s unique shielding for him to infiltrate the ship. This is a brilliant idea of Holographic warfare and something that makes a lot of sense and is cool. We’ve seen holograms somewhat used during battles, especially through Voyager. Just imagine a ship’s self-defence system just being holographic warriors. That would be so cool!

Through Dracula’s intrusion on the ship, they discover that the Qvanti don’t actually have a Prime Directive and instead actively commit acts against such a rule. They used to be the technologically inferior species on their planet. However, this led to an uprising and stole the Yentoa’s technology. It seems the Yentoa would even be kidnapped to help work on new technology for the Qvanti.

This knowledge not only gets sent to the Cerritos but the Federation itself, so the ruse is up, and this means the Qvanti have to let our senior officers go or face more problems from the Federation further down the line. And now, with Dracula’s infiltration special forces, they know they are vulnerable!

The end of Dracula… for now!

Dracula has actually become a character I think is rather cool. And a unique-ish addition to the plethora of Characters that Lower Decks has introduced to the Star Trek Universe. Though this is his end in the comic, he has a nice way to come back in more comics or even the show itself, which would be a nice piece of connectivity.

Dracula is going to Starfleet’s Emergency Holographic Academy, where other accidentally created license-free holographic entities are sent actually to learn from Voyager’s EMH. We learn there is even a Cthulhu and a Sherlock Holmes who are dating, which I kind of what to see now. I hope we see Dracula again, but for the moment, it’s been an interesting journey with him in this series.

This has been an enjoyable run for the Star Trek: Lower Decks comics; unfortunately, that is all there is now. Hopefully, this series has been received well enough for more. This 3-issue structure for the comics is needed, as it made the previous issues feel very slow, especially due to a repeated similar cliffhanger that might need to be addressed if future issues come out.

This problem might have also come from the delay between releases. Hopefully, binge-reading this series makes it feel like a single Lower Decks episode. Lower Decks: Issue #3 definitely made up for this and brought it to a satisfying conclusion. The art has been great, the characters act how we expect them to act, and it has been a fun, humorous read, which is what we should expect from a Lower Decks comic. It succeeded in being that, which is high praise indeed, considering the quality of the Lower Decks series.