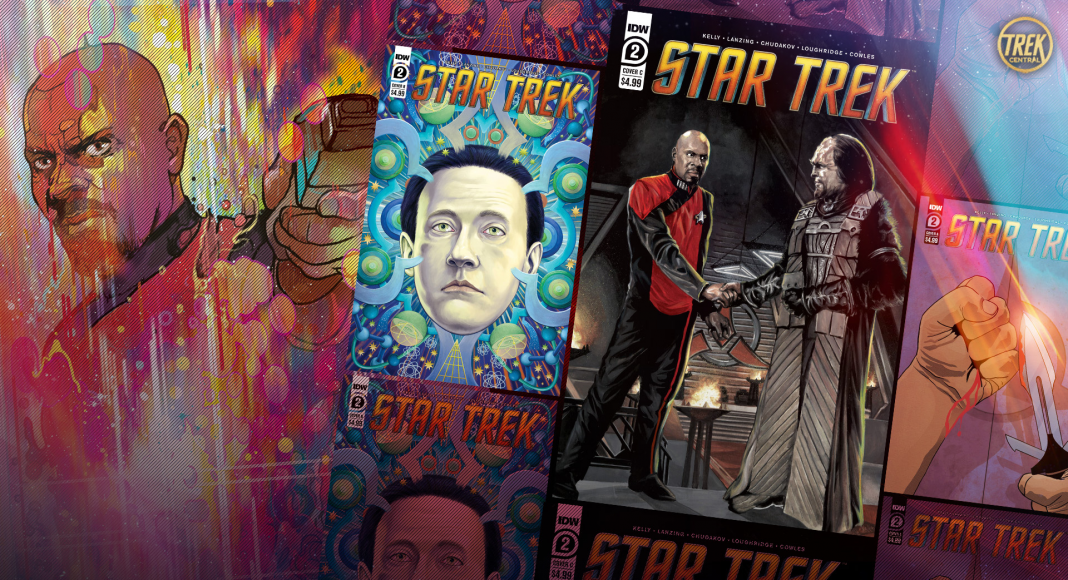 IDW’s flagship Star Trek comic series has returned with its second instalment. This issue follows up on the return of Benjamin Sisko from the Bajoran wormhole and his efforts to investigate a galaxy-wide threat. Star Trek Issue #2 shows Sisko teaming up with past iconic characters such as Data, Beverly Crusher, Tom Paris, and Scotty on a brand new ship to investigate the disturbance. When we last left them, the newly assembled crew witnessed this mysterious force’s destruction of the crystalline entities.

Something this issue utilizes, as well as the previous issue, are in-universe lore pages. These full-page pieces primarily use text to give more information on a current topic related to the story. In this issue, we see two such pieces. One is on the state of the Klingon Empire and its governance structure, and the other is a song or poem based on the mysterious Sarkadesh. These help the reader get immersed in the story and allow the universe to come alive. They add to world-building in an organic way that doesn’t feel like a plot dump.

Star Trek Issue #2 opens with Sisko and his crew arriving on Qo’nos, where Ambassador Worf immediately greets them. Seeing Worf here follows up on the end of Star Trek: Deep Space Nine, where Worf accepts the ambassador position. This story takes place three years after the end of DS9, so Worf has fully settled into the position. They meet at the Qo’loq crater, which is the site of the first great battle in Klingon history.

This battle was dramatized in IDW’s “Star Trek: Klingons #1”, which dramatized the origin of Kahless the Unforgettable. The imagery of the three-pointed symbol of the Klingons used as a massive bridge in the crater can be seen in both issues.

Sisko and Worf then meet with Kahless the Unforgettable himself. His physical presence is a follow-up on The Next Generation episode, “Rightful Heir”. In that episode, Kahless is cloned and made the ceremonial figurehead of the Klingon Empire. This is the first time we’ve seen him since that TNG episode. He was mentioned several times in DS9 but never seen on screen. It is curious why Sisko and Worf would go to Kahless for permission to enter Klingon space when he doesn’t seem to hold any real power.

The reason Sisko and Worf go to Kahless is to investigate a particle trace left by whatever killed the crystalline entities. The trace was only previously detected by a species found in Klingon space. The species is known as the Sarkadesh, and they are said to have incredible engineering capabilities and harbour unimaginable power. It’s odd and rather convenient that this series would introduce such a powerful species that has never been mentioned in any other media. It may have been more organic if the Sarkadesh were either portrayed as less powerful or the story used an existing race such as the Bynar.

After confronting the Sarkadesh and a brief battle with the Klingons, Worf decides to resign his post as an ambassador and reenlist in Starfleet. While it is exciting to have Worf join Sisko’s crew, this choice deflates Worf’s character arc. Much of Worf’s arc was about him struggling to decide between his Klingon heritage and his life as a Starfleet officer.

Worf eventually found a middle ground between the two by becoming ambassador. Therefore being able to have a life in both worlds. Now just three years later, Worf will apparently give that up and commit to Starfleet full-time. It is disappointing to see him forgo such a powerful choice.

The next instalment of this series is called “So Long and Thanks For All the Q.” This is a reference to the fourth book of the Hitchhiker’s Guide to the Galaxy series. A fun nod to another prominent sci-fi series. This also lets us know that Q will appear in the next issue. This series is bringing in all the big guns, so it seems fitting that Q would make an appearance. The last time Sisko and Q met, Sisko, punched him in the face. Let’s see how their next meeting goes.

Overall, this was a fine issue that continued to expand the world and reintroduced the Klingons post-DS9. The introduction of the Sarkadesh felt awkward, and Worf’s character retread felt unearned. However, Sisko’s characterization was on point, as well as Data’s. Data gave a stand-out monologue to convince the Sarkadesh to spare their lives, which felt very Data-y.

Issues of IDW’s Star Trek series can be found via all good comic book stores. Issue #3 is on course for December 2022.