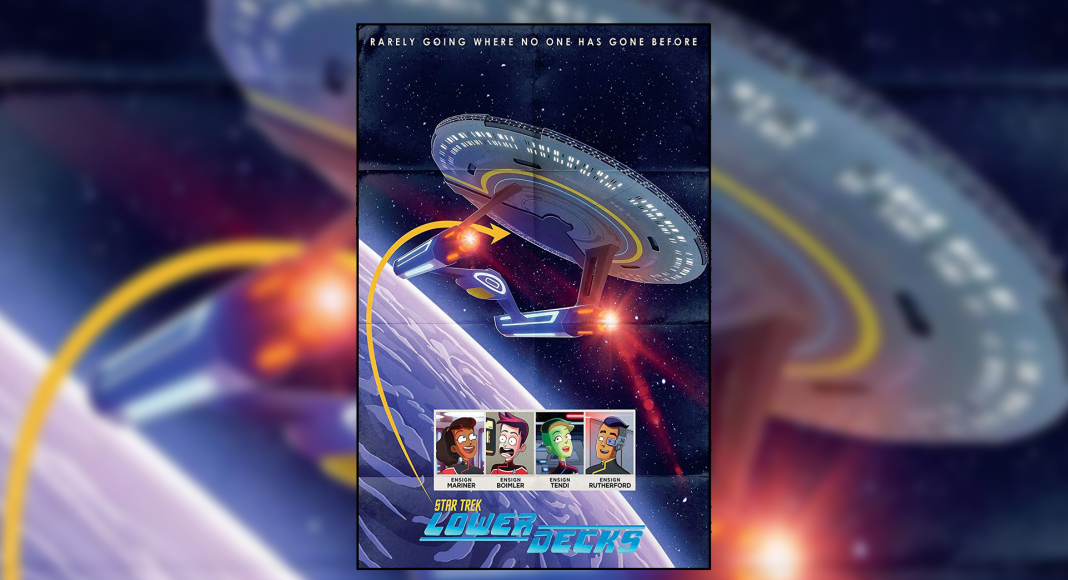 An Introduction to Star Trek: Lower Decks Before its UK Premiere.

New to Star Trek: Lower Decks? Let us introduce you to the latest animated series set in the Star Trek Universe before its premiere on Amazon Prime in the UK and internationally on January 22nd,

When news first broke that a Star Trek comedic animated series was in development by CBS, the fan response was less than stellar. Some thought that CBS was trying to be too mainstream, or that Star Trek was losing its identity as a serious science-fiction epic. Things became even worse when the first trailer was released, as many fans thought the show looked too silly, comparing it to the humour and animation style of Rick and Morty, a show about as far away from Star Trek as one could get. Lower Decks was off to a rocky start, even before fans viewed a single episode.

But as fans mocked and complained, showrunner and head writer Mike McMahan was ready to wow fans with a Star Trek series unlike any had seen before. Lower Decks hit the ground running with engaging characters, exciting stories, and numerous Trek references and in-jokes. Alex Kurtzman described Lower Decks as a “love letter” to Star Trek fans, a statement that perfectly captures the essence of the show. Let’s look back at this oddball series.

Inspired by the popular The Next Generation episode, “Lower Decks,” the series follows four Starfleet crew members who occupy the lower decks of the U.S.S. Cerritos, a “second contact” starship tasked with the more mundane tasks not usually seen in Star Trek. Gone are the days of the big and important missions helmed by the U.S.S. Enterprise, and in its place more common but equally engaging stories of everyday life in Starfleet. Make no mistake, the U.S.S. Cerritos sees its fair share of aliens, infectious spores, and homicidal holodeck programs, but they are all explored through the lens of an average starship with an extremely average crew.

Following the crew members of the lower decks provides an interesting perspective that is usually unexplored in Star Trek. It is a tradition that we follow the bridge crew in a Trek series, but what about the hundreds of other people that make up a starship? This is the reason the TNG episode “Lower Decks” is so revered. In the Lower Deck series, we get to see the otherwise forgotten members of the crew and how they face their own unique challenges aboard a starship. What is it like to share bunks instead of having individual quarters? How do you act when you are around senior officers? How do you empty the waste on a holodeck (gross)? While this series stands firmly on its own, it is a great companion piece to the rest of Trek as it fleshes out its universe and lore in many previously unseen ways.

Speaking of the crew, the series follows the four “lower deckers,” Brad Boimler, Beckett Mariner, D’Vana Tendi, and Sam Rutherford. Each has a unique voice and takes on a popular “trope” within Star Trek. Boimler is the eager ensign who will do anything to get promoted, a la Harry Kim. Mariner is the renegade who is dedicated to Starfleet but does things her own way. Tendi is the naive ensign who is just excited to be here, very much inspired by the likes of Wesley Crusher. And last is Rutherford, who can be viewed as a cross between Geordi La Forge and Data. These four get into all sorts of wacky hijinks throughout the series’ ten-episode run. It is also important to give a shout out to the bridge crew, who while not having as much screen time as the four lower deckers, are equally as interesting and hilarious.

Lower Decks is littered with countless references to other Trek series, sprinkled generously throughout the show. Some references are fairly obvious, while others are so minor that you would have to have seen all of Star Trek to truly understand them. These references often rise above general “fan-service” by being relevant to the story. While these references are very satisfying for hardcore fans of Trek, they can leave the casual viewer confused. While not crucial to understanding the story, some references provide comedy ‘in-jokes’ that relate to the overall comedy the show produces, so without the knowledge of the references, you may feel left out. This may explain why the show has only received average reviews from mainstream critics but has received more favourable reviews from Star Trek regulars.

With season 2 coming this year, there is much to look forward to. Much like the USS Cerritos, few expectations are placed on Lower Decks, meaning it has the opportunity to challenge the genre of Star Trek and tell different kinds of stories than the ones we’ve received for 55 years. While shows like Discovery and Picard have divided fans over the direction this new era of Star Trek is going, Lower Decks is proving to be the little show that could, defying expectations and boldly going where no Star Trek show has gone before, uniting fans over our shared love of everything Star Trek.

Star Trek: Lower Decks is available on Amazon Prime UK and internationally from 22nd January 2021. Amazon Prime costs £7.99 (UK) a month with a free 30-day trial (if you have not been a member within the last 12 months) to register visit Amazon

You can also find video reviews for each episode of Lower Decks season one on our YouTube channel: Trek Central Lower Decks Playlist (Spoiler Warning)

Will you be tuning in to see Lower Decks when it debuts on Amazon Prime? Have you already seen the series from its original run from the US? If so what did you think? Let us know and get in touch via our social media!