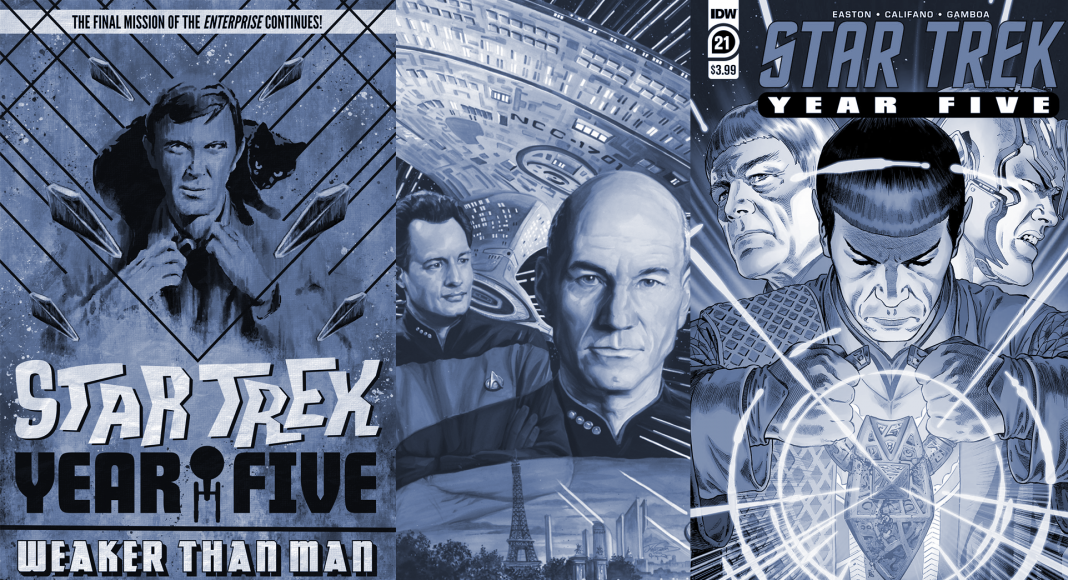 Previews for the upcoming releases in the Star Trek comic line from IDW Publishing including the reprint of The Next Generation graphic novel ‘The Gift’ written by John De Lancie.

New comics are inbound from IDW Publishing as they continue the Star Trek: Year Five series and we see a conclusion to Star Trek: Voyager ‘Sevens Reckoning’.

Star Trek: The Next Generation—The Gift

Written by John de Lancie with art by Gordon Purcell and cover by J.K. Woodward

An all-new reprint of the classic TNG story! Q gives Jean-Luc Picard the chance to go back in time to fix one of his biggest mistakes, but the consequences of his actions will create a ripple effect that will threaten the entire Federation! Written by Q himself – actor John de Lancie – with art by Gordon Purcell and a newly painted cover by J.K. Woodward.

Written by Dave Baker and art by Angel Hernandez

The battle may be over, but the worst is yet to come. Torn between her growing attachment to an alien race and her new commitment to the Prime Directive, Seven of Nine must choose between altering the course of an entire society and her place aboard Voyager in the conclusion to this story set during Voyager’s amazing fourth season from writer Dave Baker (Action Hospital, F*ck Off Squad, Star Trek: Waypoint) and artist Angel Hernandez (Star Trek: Picard Countdown, Star Trek/Green Lantern).

Written by Brandon Easton, art by Silvia Califano and cover by Stephen Thompson

As the crew of the Enterprise moves toward an uncertain future, one of their own will be pulled into a violent past! While investigating a mysterious structure on Vulcan, Spock vanishes. As the crew tries to find him, Spock must fight to survive as he navigates the painful past of his home planet. The final voyages of the original crew continue in this time-hopping adventure from writer Brandon Easton (Transformers: War for Cybertron, Thundercats) and artist Silvia Califano (Star Trek: Year Five, X-Files: Case Files)

Written by Brandon Easton, art by Silvia Califano and cover by Stephen Thompson

With Spock still missing, the crew of the Enterprise needs to figure out where—and when—he is if they want to save the future! Meanwhile, on Vulcan, Spock is faced with a choice that won’t only change his life, but Vulcan society as he knows it! The final voyages of the original mission continue in this episode from writer Brandon Easton (Transformers: War for Cybertron, Thundercats) and artist Silvia Califano (Star Trek: Year Five, X-Files: Case Files)

Join the crew of the original Starship Enterprise in these all-new adventures as they near the conclusion of their five-year mission.

All this against the backdrop of a sinister malaise threatening to rot the Federation from within. Terrible secrets are revealed, among them the origin of Gary Seven and the grand designs of the shadowy AEGIS organization. Can Kirk and the Enterprise crew excise this corruption, or will the five-year mission end in failure?

While waiting for these comics to hit the shelves why not check out our past reviews of IDW Comics including Year Five and Seven’s Reckoning.