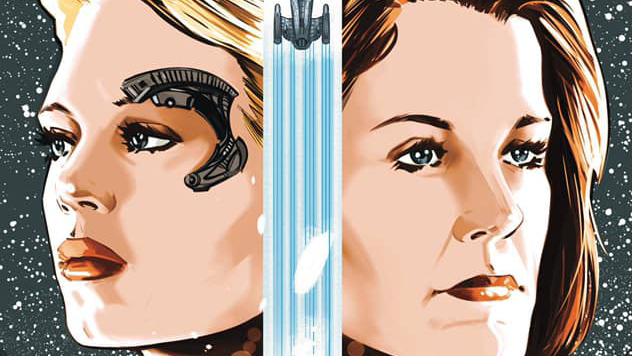 Dave Baker is a writer and artist with a back catalogue that includes a journey from writing for adverts and feature films, bringing him to his dream job of writing for comics.

Dave Bakers comic writing credits include ‘Suicide Forest’, ‘Fuck Off Squad’, ‘Teenage Switchblade’, ‘This Is Not A Girl Gang’, and ‘Professor Cuties’. He’s currently writing and co-drawing the comic book Action Hospital. As a lifelong Star Trek fan, Dave is working on his dream job by writing for IDW Publishing on the Star Trek brand and he took time out of his day to give us an insight into the inner workings of the comic book industry and answer some questions on his upcoming miniseries Star Trek: Voyager – Seven’s Reckoning which is released in the UK on 11th November and available to pre-order via Forbidden Planet.

TrekThis: Can you give us a little bit about your background, your bio on your site says that you have been involved in a variety of projects including feature films, have you always wanted to be a writer and what projects have you worked on in the past?

Dave Baker: Yeah, I’ve been a hired gun in pretty much every aspect of ‘getting paid to write something’ a human being can. I was a freelance writer for seven years. So, you end up in some bizarre jobs. It’s funny that you ask “have you always wanted to be a writer” because I don’t feel like I’ve ever “wanted” to be one… I just am one. And any time I try to do something else I just hate it. I’ve written everything from infomercials to SEO web articles to episodes of ‘Ben Ten’ on Cartoon Network. Last year a feature film I co-wrote titled ‘Alien Warfare’ was produced and is currently streaming on Netflix.

TT: How long have you been writing? Was writing for the comic industry an ambition for you or was that just where your career path naturally led?

Dave Baker: Yeah, I’m a comics person through and through. All these other things I’ve done have just been to pay rent. I’ve been self publishing comics since I was in high school. For better or for worse… comic books are the only thing I deeply care about. They’re like my religion. They’re the greatest artform humanity has created thus far. And I’ve been plugging away at making my small contribution to the medium.

TT: What was your first project in the comic industry? How did it come about?

Dave Baker: That’s kinda hard to pinpoint because I’ve been self-publishing for so long. I’d say the first project that I feel like really struck a chord with people was my book ‘Fuck Off Squad’, produced with writer/illustrator Nicole Goux. It’s a coming of age romance comic set in the world of skater kids here in Los Angeles. I’m very proud of it and it’s very gratifying to see it connect in the way that it does.

TT: Can you tell us the process for pitching a story to someone like IDW or do they approach you with your body of work as a reference?

Dave Baker: So, I worked on the ‘Waypoint’ anthology last year? The year before? I don’t even know at this point. And the editor, and all-around swell guy Chase, reached out to me and asked if I was interested in pitching for the book. Which OBVIOUSLY I was. I’m a huge Trek person and so I put together what I felt was my dream ‘lost episode’ of the show and pitched it. To my surprise, CBS approved it and we were off to the races. I’m just thrilled that it all came together.

TT: Was Star Trek always on your bucket list to write for and do you hope to be able to utilize your skills from Film and TV writing to one day make the transition to write for Star Trek in live action?

Dave Baker: Look, I’d be lying if I said I wouldn’t JUMP at the chance to write for one of the new Trek shows. I’m a HUGE Trek person. They’re doing some very interesting things right now. I’d love to write for them. However, I feel like there’s an undercurrent of ‘just slumming it’ with a lot of people who are in comics who are just trying to go other places. I’m a comics person through and through. This is the end goal for me. Would I love to work on a Trek live action show? Of course! But, to me, making comics is the pinnacle of artistic achievement. It’s not a ‘second best’ type situation.

TT: What can you tell us about the upcoming Star Trek: Voyager – Seven’s Reckoning? Where does it take place in the Voyager timeline?

Dave Baker: ‘Seven’s Reckoning’ follows the Voyager crew as they discover a ship adrift in space. They board it to see if they can be of any help, and discover that the ship has been adrift for nearly 1000 years. They discover that the ship has two classes of an alien species on it. An upper class that’s like an aristocracy and a lower indentured servant class. Seven begins to help them rebuild their warp drive, in exchange for supplies, and gets sucked deeper and deeper into this class conflict. The story was inspired by the wonderful TNG episode ‘The Outcast’ and the ENT episode ‘The Cogenitor’. I’m a big fan of when one of our crew members gets sucked up into a moral quandary and has to sort out what is the best for everyone. In our story, Seven will have to decide what is the proper course of action to take. Should she help in a political revolution? Or is it better to just try and remove herself from the conflict. Angel Hernandez, the artist on the series has done an amazing job building out the world.  The story takes place in season four. It’s somewhere in between the episodes ‘Year of Hell Part 1’ and ‘The Scientific Method’.

TT: When writing a comic like this, how much collaboration between the artists, colorist, letterer, and you is there? As you write the panels do you have an image in your mind of what it would look like and feed that back or do you leave it all to their own interpretations?

Dave Baker: Writing comics is like making a blueprint for a house. The artist and colorist are the ones who really build everything. I’m just like WOULDN’T IT BE COOL IF THERE WAS A DOOR THERE? And then they’re the ones picking out the wood grain and brass handles and stuff. I open every script with a letter to Angel, detailing how I’m feeling and what our objectives are for the issue. But the script itself is hopefully open to interpretation so he can build off of it and make things better and more ‘in his voice’, if that makes sense. Normally, I’m VERY involved in the process, but since Trek is owned by IDW and the licensors and what not, I’m a little more removed this go around.

TT: The comic focuses on Sevens continued struggle for her humanity, what is it about this aspect of Voyager and her character that inspired you to want write about?

Dave Baker: Well, I think that’s something we’re all struggling with. We’re all trying to be a better version of who we want to be, right? We’re all trying to be more empathetic and understanding. It’s an age old Trek tradition. The character who’s least human is inevitable the most human by the end of the show. A developing and maturing character is also more interesting to write because you have so much more potential for conflict than a character who is already set their ways.

TT: You also wrote a short story for IDW that appeared in one of the Star Trek ‘Waypoint’ miniseries called ‘Only you can save yourself’ which focused on Ezri Dax from Deep Space 9. From a writer’s point of view, when writing for an existing franchise or brand such as Star Trek, do you feel an extra pressure to get the story right and something that the fans will like, or do you just put that to one side and look to tell the best story that you want to tell?

Dave Baker: I mean, I’m a fan too… so I’m usually just trying to write the dream scenario for what I’d want to happen. Without it being too fan service-y. I just want to tell the best stories to the best of my abilities. And that takes a wide range of shapes, apparently. But yeah, I do feel some pressure. However, I would phrase it more as responsibility. I feel an immense responsibility to honor the people who have told stories with these characters before me. I’m such a big fan of Star Trek I wouldn’t want to be disrespectful to the brilliant creators who have come before me. I like to think of it as working as a brick layer. We’re all working on building this big wall out of stories. From me back to Peter David on the DC Trek books back to the Marvel books back to the UK magazine books. All of these stories were lovingly created, and I wouldn’t want to kick over that wall just for the sake of being a showboat. I want to put my brick on the wall and then stand back and say, “wow, look what we all did together. Isn’t this wonderful?”

TT: Have you always been a Star Trek fan? What was it that brought you to the franchise? And I always ask this, Kirk or Picard?

And to answer your second question: Sisko. Sorry. He’s my fave.

TT: Are you working on any future Star Trek comics for IDW or at least have more ideas to pitch? If so can you give us any clues?

Dave Baker: Currently, I’m just trying to wrap up ‘Seven’s Reckoning’. I’d love to write more Trek comics, but we haven’t had those discussions yet. I’d love to do some more though. I love the franchise so much. Tuvok is my favorite character… so, y’know… just saying…

TT: What’s next for you?

Dave Baker: The week after ‘Seven’s Reckoning’ I have a creator owned book coming out from Floating World Comics titled ‘Night Hunters’. It takes place in Venezuela 100 years in the future. There’s been a law passed that if you want to have a child in a hospital, to run for public office, or to rent an apartment you have to have been a police officer. The book follows two adoptive brothers as they attempt to negotiate this no win scenario. You can find more of my work at www.heydavebaker.com/

After Voyager encounters a damaged alien ship deep in the Delta quadrant, what at first seems to be a simple repair mission becomes much more complicated for Seven of Nine as she becomes involved in an ancient conflict that will put her newfound humanity to the test. From writer Dave Baker (Action Hospital, F*ck Off Squad, Star Trek: Waypoint) and artist Angel Hernandez (Star Trek: Picard Countdown, Star Trek/Green Lantern).

Get involved via our social media platforms: