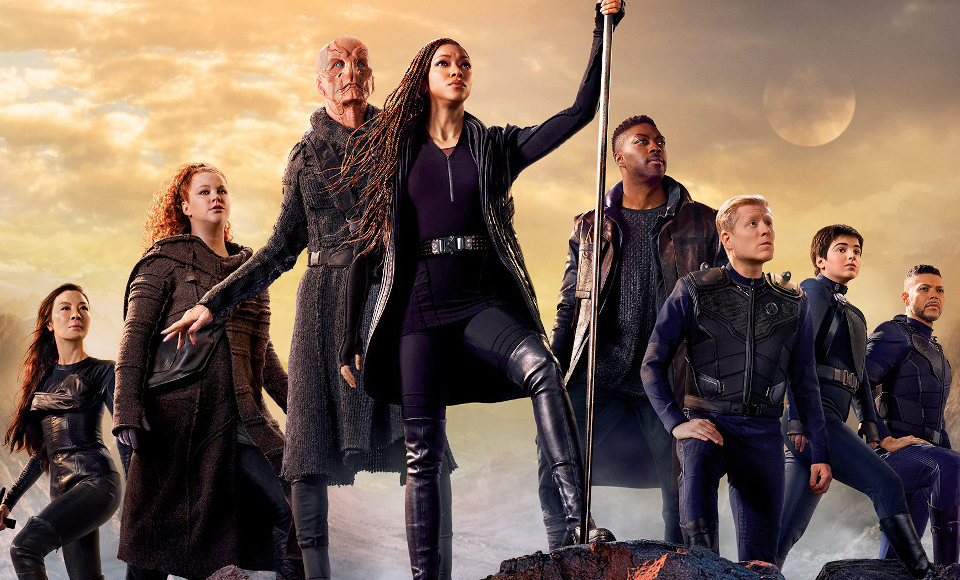 Since the last days of the USS Voyager, those at Paramount/CBS saw the future of Star Trek as being in the past. Perhaps it was DS9’s rather touching ‘Trials and Tribble-ations’ that whetted appetites.

First we had Enterprise (initially dropping the Star Trek moniker to indicate that it wasn’t Star Trek…yet) giving us a view of the early days of the Federation. Then the Kelvin Timeline popped up to rewrite the (parallel) adventures of the young Kirk and Spock et al. Both gave futuristic spins on the original series. Both were divisive for fans. TOS is, of course, the bedrock from which the franchise had sprung and therefore, probably as far as the hardcore fans are concerned, should remain locked in its own untouchable bubble with any subsequent stories set strictly after it.

So when Discovery was announced as yet another prequel entry into the canon, there was some consternation. Enterprise was given a bad rap (unfairly?) and the Abrams movies had their own issues. So what could Discovery do that would be different?

Strangely, both Discovery and the Abrams movies both have Enterprise as established canon. Discovery‘s design owes more to the latter. Sisko’s trip to Kirk’s original starship proved that TOS‘s 60s designs still proved pleasing on the eye. This make-over was, then, extreme.

Holographic interfaces, huge view-screens, soccer pitch-size bridges, concert-hall engine rooms…starships were bigger, bolder, faster. Even the Enterprise herself wasn’t free of the overhauls (what is it with those turboshafts?). The Discovery stories were arc-driven, the characters openly swore (no ‘double dumb-ass on you!’ here) and there was nudity. The approach looked so different. We were expected to believe, nay accept, that this was all in the same universe as Elaan of Troyius, Dr ‘Bones’ Boyce and Captain Jonathan Archer. To name but a few.

Correct me if I’m wrong, but retro-fitting a long-running sci-fi series is surprisingly rare. There are only three to my knowledge that have so blatantly done this. Take Star Wars. A Palpatine is now the saviour of the galaxy? Doesn’t that make the complete Skywalker saga utterly pointless? Then Doctor Who. Hartnell wasn’t the first, and the Doctor isn’t a Time Lord and/or Lady? And Star Trek. Of these three examples, the third is the one that has tried, at least, to make the revisions make sense. Discovery‘s first year was so unlike TOS and Enterprise. Bringing it more into line with established canon as Season 2 progressed was obviously a conscious decision on the part of the producers to allay the backlash they had been getting. But did it work?

It makes me think they’re backtracking with the excuse that Discovery can now be very different because it’s set way ahead by some 900 years. Either that or they genuinely planned this from the start.

I have a feeling that it’s an attempt to retro-fit Discovery itself within its own canon as well as that of the wider franchise. Replacement production crew and writing staff (which occurred almost from day one on Discovery) will naturally bring their own take on a series. But one as beloved and as cherished as Star Trek, this is a big responsibility. I understand that, because (blatant plug coming up) I have been directly involved in the follow-up continuation novels for Robin of Sherwood. Yes, I know its gravitas is minuscule compared to the giants of Star Trek, Star Wars etc, but ITV and the estate of creator Richard Carpenter are nevertheless very protective and rightly so.

The challenge is in getting the balance right to respect and acknowledge what has come before while, at the same time, moving the story-telling onwards. A new, modern audience demands more. It isn’t easy. Yet it can be if done with care and attention.

I for one will be watching with great critical interest the literal future of Star Trek when Discovery‘s new episodes drop from this Friday onwards on the UK’s Netflix.

I don’t want it to fail. Why would I? I want it to soar. It’s now no longer beholden to the past. And therefore it should grab that opportunity and give us everything we have wanted from a brand new original Star Trek series with no constraints.

Boldly go, Discovery, where no one has gone before.