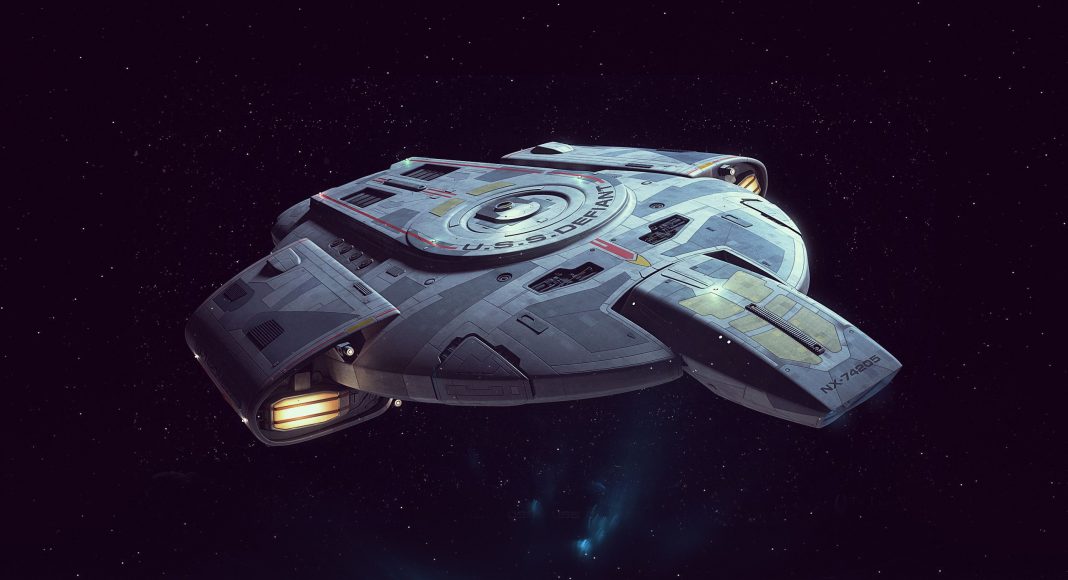 The USS Defiant – The Little Starship That Could

We celebrate the small ship that made a big impact in Star Trek: Deep Space Nine’s third season.

Like any other franchise, Star Trek has few tropes that give it that special flavor and make it recognizable among the ocean of other sci-fi shows. For Trek, this is a starship and the idea of exploration. That’s why the arrival of Deep Space Nine on the small screen caused a shock among the audience. For the first time in Trek history, the crew was not boldly going. Instead, they were “trapped” at the stationary outpost, set on the fringes of the Federation space. Aware that one location is not enough, the producers gave the crew the fleet of small ships – the runabouts. This allowed for the stories set on the other worlds. Yet, this was not enough, as slowly but steadily, what will become one of the signature elements of the show was developing. A war was brewing, a start of a long sequence of events that will redefine not only the show, but it will also redefine Trek itself and question its values. To fight the encroaching Dominion and its unstoppable Jem’Hadar warriors, Sisko and the company required something better than fragile runabout. What they needed was a new starship. What they needed was the USS Defiant.

The beginning of the show third season, “The Search, Part 1”, introduced us not only to the powerful enemy and its nefarious plans. It also gave us the first good look at the ship that will become an essential part of the Trek starship pantheon. The Defiant was a ship unlike anything seen before. It was small, it was unstylish, it was weird. But as Sisko said: “She may have flaws, but she has teeth.” And what teeth she had. This ungainly, alien-looking ship was extremely nimble and very powerful. Developed to be the answer to a Borg threat, this was not an exploration ship, made for first contacts, this was a ship geared for war. No families were roaming through the wide carpet covered corridors. Instead, the soldiers were running through its cramped interior.

If Galaxy-class was a luxury steamer, Defiant was a WW2 destroyer or submarine. The contrast between the two classic ships comes to the fore immediately after the Defiants introduction. Who can forget the traumatic kamikaze attack which sealed the fate of USS Odysseus, yelling at viewers that from now on, they should forget everything they know about Trek?  The rules have changed. From now on the Federation will fight dirty. That was the reason why the Defiant got her experimental clocking device, borrowed from no other than the Romulans. After all, in a war, the enemy of your enemy is your friend. It will take time to bring the elusive warbirds into the fight, but for the time being, the Federation had a secret weapon, which more than once saved the situation from the brink of disaster. But why to stop there? Deep Space Nine screenwriters were willing to risk it all. Defiant is also the first main starship in the franchise (outside of the movies) that was “killed” in action. True, it soon came back, but that moment left us to ponder. If a hero ship can be destroyed, what else can the Dominion do? Deep Space Nine had left us on the edge of our seats, confused, puzzled, afraid for the Federation, for the crew, for the ship. And wanting more.

The introduction of the USS Defiant – the little ship that could – gave us some of the best Star Trek stories ever written, it gave us some of the best visuals seen up to that point in Trek (but also in comparison to other sci-fi shows at that time), it gave us some of best action scenes. It gave us a great Trek experience. Ultimately, the Defiant gave us a new perspective and proved that the introduction of darkness will not tarnish Roddenberry’s vision. This is a lesson that remained with us since then, the lesson that now continues with Star Trek: Discovery. After all, the candlelight shines brightest in the dark.

Follow us and get involved via our social media platforms: