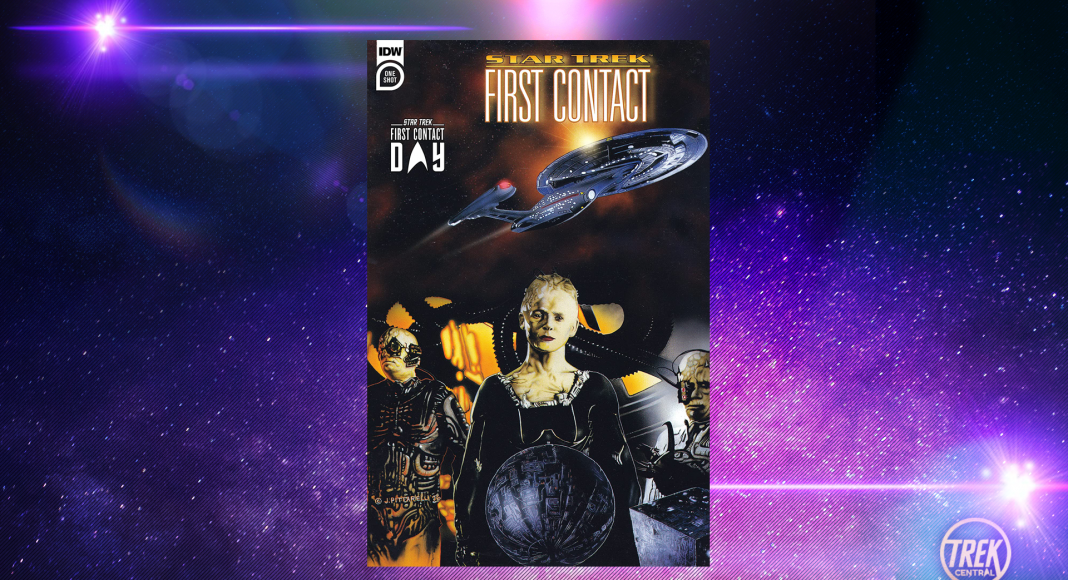 Twenty-five years ago, Star Trek: First Contact debuted to audiences around the world. Since then, it has earned its place as one of the best Star Trek films in the thirteen film franchise. Because of its revered status, it is no wonder that the film received a full comic adaptation for its quarter of a century anniversary.

The comic adaptation covers the entirety of the film, from the Borg attack at Sector 001 to the launch of the Phoenix in stunning illustration. This comic is a great way to re-experience the events of First Contact, which by now many fans have seen numerous times. It is a celebration of the striking visuals that First Contact is remembered for, from the zero-G sequence outside the hull of the Enterprise to the destruction of the Borg Queen at the climax of the film.

First Contact has garnered a place in fans’ hearts because it contains many of Star Trek’s greatest qualities: time travel, world-building, starship battles, interesting aliens, and deep character moments. Every member of the crew gets a moment to shine, and Picard especially reconciles with his past in interesting and exciting ways. The film establishes a previously untouched period of Earth’s history and finally gives detail to an event that fans had been curious about since Star Trek’s inception.

While the adaption gives us an opportunity to relive First Contact, it makes some small but notable changes. Most scenes are truncated from the film, most likely to conserve time, some dialogue has been altered, and some scenes were completely cut. One notable truncated scene is when Lily confronts Picard for his unrelenting desire to fight the Borg instead of destroying the Enterprise. While this serves as the emotional climax of the film, it is simply a short exchange between the two in the comic. We miss out on the moment from the film when Picard goes overboard and smashes the display case of miniature Enterprises. There are many such examples of this in the comic where scenes lose much of their weight due to their truncation.

One confusing change comes from when Lily hands Picard her phaser when Picard reveals that they are in space. In the film, Picard says, “Maximum setting. If you fired this, you would have vaporized me.” In the comic, Picard says, “It was set to level one. If you’d shot me, It would’ve given me a rather nasty rash.” This new line is the exact opposite of what he says in the film. It is a strange change because the original line heightens the stakes of the interaction, while the comic’s version shows that PIcard was never in any real danger. There are many more small alterations to dialogue, but none of them change the overall story. The essential story beats are there, but some notable character moments have been lost.

Something is always altered when changing mediums. From book to screen, screen to stage, or screen to comic, the story will always change to fit the medium in which it is being told. This is often why many people say that books are always better than their film adaptations. There is something essential to the original medium from which a story is told, something that cannot be replicated in another form. In First Contact’s case, we lose those great actor performances, a sweeping score, and stunning visual effects. While it was fun to experience First Contact in the style of a graphic novel, at the end of the day, I’d rather watch the movie.