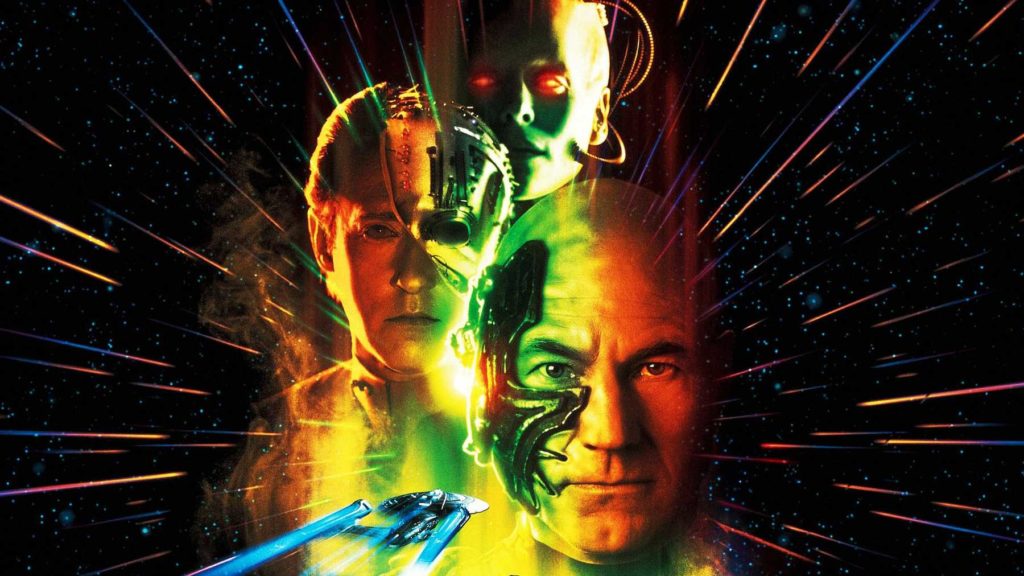 Star Trek: Frist Contact was released 24 years ago today and as part of our Trek Back series, we look back at one of the greatest entries in the Star Trek film catalogue.

Back in 1996, I was 8 years old and tried my best to see this film. I was 4 years too young, so this endeavour ended badly and no matter how much I pleaded, the underpaid usher at the Empire Leicester Square didn’t believe me for a second that I was actually a short 13 years old. It was bad enough that here in the UK, we had to wait a whole month more to see Star Trek: First Contact following its release in the US, but now I had to wait until the following year to see it on video. However, was the film worth the wait?

The answer is an incredibly resounding yes. While his only directing experience came from Television episodes (and primarily of his own show once the actors had established a firm grasp on their characters), and before he went on to direct 2004’s Thunderbirds (an unpardonable sin in the eyes of this and many other Supermarionation fans minds), Jonathan Frakes had never tackled directing a feature before, but you couldn’t tell from the quality of the final product found in Star Trek: First Contact. From onset tales, Frakes was known for such efficiency he went on to earn the nickname ‘Two Takes Frakes’. To me, however, I think the greatest compliment I can pay him is thus, I enjoyed Stuart Baird’s editing on the 2006 Casino Royale, However his direction on Star Trek: Nemesis is probably a big reason why it failed somewhat at the Box Office. Being fair, it was up against a fairly stacked slate from Die Another Day (objectively awful but 007 is a Box Office juggernaut) and Peter Jackson’s anticipated sequel to The Lord of the Rings, The Two Towers. If Mr. Frakes was at Star Trek X’s helm instead, it would still face a tremendously Cinematic slate challenge, but based on his debut here, I’d argue his Nemesis would have stood a far better fighting chance than it did in reality. His undoubted knowledge of the subject matter and his experience with the ensemble cast of characters contributes to his amazing direction when it comes to Star Trek.

Plus, I’ve heard rumors that Jonathan Frakes is not only a fellow Trekkie and my cinematic inspiration, but also a New England Patriots fan like me. So, he is obviously a man of great talent and taste.

While the design of the previous Enterprise, the Galaxy Class was incredible and would have looked exactly at home on the silver screen, it’s design does not exactly lend itself to efficient film production due to the model’s unwieldy quality and mounting points. Its successor, the new Sovereign Class is possibly as beautiful as a starship can get and the fact that I’m writing all this and still gushing 24 years later just goes to show how highly I regard the Sovereign Class. It earned the ultimate accolade in 2019: The Enterprise E is an ornament on my Christmas tree.

As an ensemble piece, an unfortunate inevitability is that some of the cast are underutilized. Rarely do Gates McFadden or Levar Burton get many meaningful scenes. While this mostly extends to Marina Sirtis as well, however, it must be said that she and Jonathan Frakes get the biggest laugh of the film in the scene where Riker finds out how blended Troi got on Tequila getting to establish contact with the 2063 Zefram Cochrane. For a Directing Actor, Frakes turns in a great performance (just see any instance of Quentin Tarantino ‘acting’ for a comparison to see what I mean) alongside an on form Sir Patrick Stewart who produces an excellent performance (as is typical of him) emphasized by his ‘this far and no further’ soliloquy opposite the excellent Alfre Woodward.

Brent Spiner plays Data at arguably the most pivotal turning point of his life, it is excellent how he remains so believable when objectively, his Frankenstein – esque scenes in main engineering border on near parody at times taken purely at a writing level. Industrial Light and Magic’s special effects were excellent when this film premiered in late 1995, but all these years later, they still hold up. Whether this is due to the sheer quality work which the creators of the special effects of Star Wars brought to Star Trek VIII is an argument for another time. What is unarguable is that 24 years later, they have aged even less than some computer-generated Imagery on contemporary episodes of both Deep Space Nine and Voyager. This might owe to having a substantially bigger budget with a motion picture one than its Television equivalent, but it is still some achievement considering the years since its premiere.

Finally, while I agree that in retrospect, it is odd that in 2063 ‘Oobie Doobie’ by Roy Orbison and ‘Magic Carpet Ride’ by Steppenwolf would still be played. It is my firm belief that these songs truly rock and it is for this reason that I can overlook this possible anachronism and just welcome their inclusion on the film’s OST. I tell myself that following the third world war music was at a premium and the fact that they have a working jukebox is considered a luxury. And they also rock.

fun fact: The original USS Voyager is in early trailers for the film.

Overall, I would recommend this film so highly partially as it had barely aged in the nearly quarter-century since release. Wall to wall excellent performances and effects work of such quality (which upstages effects made for subsequent Star Trek films) and feel as fresh as they did back in late 1996.

Often considered the best entry in the movie series, but where does it rank for you? Get involved and let us know via our channels below:

Trek Back: ‘Journey to Babel’

'Trials and Tribble-ations' is a look at one of the most iconic episodes of Star Trek, aired 24 years ago celebrating 30 years of...
Read more
Trek Back

Trek Back: ‘Unification I’

It's 29 years since Spock first returned to TV, and we take a Trek Back to Star Trek: The Next Generation's 'Unification I'. Written by:...
Read more

The USS Defiant – The Little Starship That Could

Vedran Bileta - October 21, 2020 0
We celebrate the small ship that made a big impact in Star Trek: Deep Space Nine's third season.  Like any other franchise, Star Trek has...

Why Kathryn Janeway Is The Leader We Need Right Now

Star Trek Episodes and Their Sequels