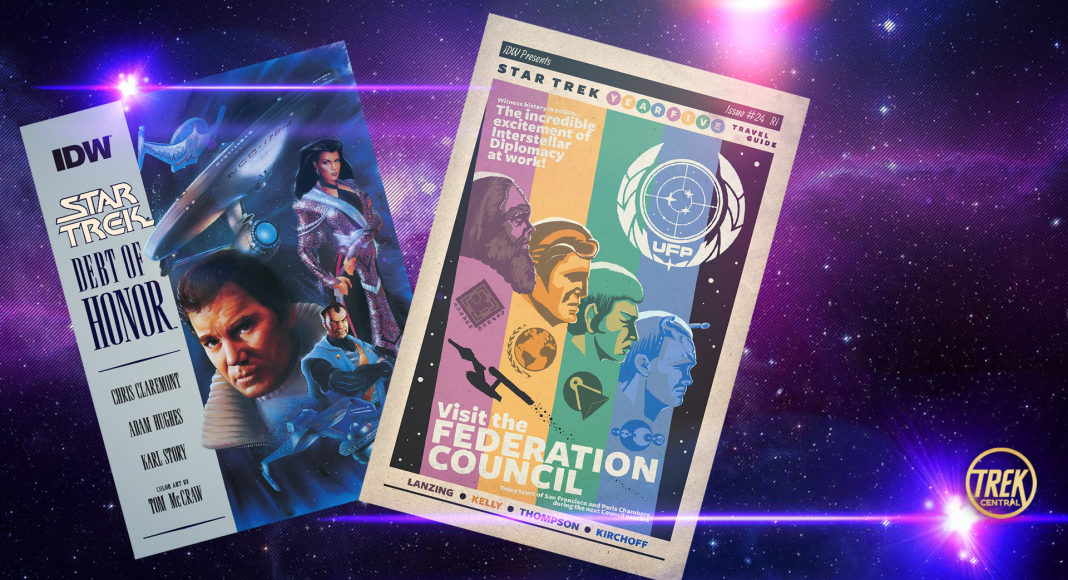 Previews of two of IDW Publishings upcoming comic releases that include the final entry of the popular Star Trek Year 5 run, as well as a reprint of the 1992 classic ‘Debt of Honor’

If you have missed out on April and May’s previews, fear not, you can take a look at what’s on offer from IDW by clicking the links at the bottom of this page.

Their journey has taken them to the edge of the known universe and beyond. They’ve faced down impossible odds, conquered incredible enemies, and now, here in the shadow of home, their mission will come to an end… and nothing will ever be the same. The crew of the Enterprise will put it all on the line in the grand finale of Star Trek: Year Five from showrunners Jackson Lanzing & Collin Kelly (Gotham City Garage, Green Arrow) and artist Stephen Thompson (Satellite Falling, Die Hard: Year One).

In this oversized graphic novel from comics legends Chris Claremont and Adam Hughes, Captain Kirk and the crew of the U.S.S. Enterprise find themselves teamed with the Klingons and Romulans to fight the galactic threat that no government dares admit exists…

A stunning 96-page adventure that celebrates Star Trek’s enduring legacy, IDW is thrilled to present this Debt of Honor reprint in its original 8.2” x 11” size.

As new covers are released we will update this article so be sure to check back.