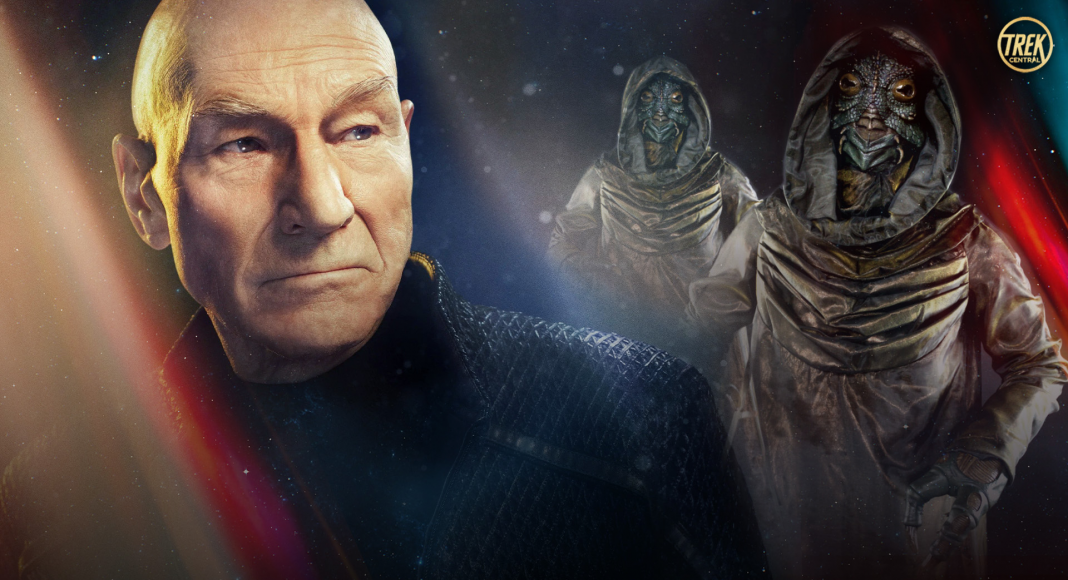 Finally, we’ve got more plot reveals for Star Trek: Picard Season 3! Star Trek Day’s 2022 celebrations brought a new teaser trailer for the upcoming third and final season. While many are eyeing the new USS Titan-A, we have other plans. Do we know Star Trek: Picard’s New Enemy?

Showrunner Terry Matalas and Alex Kurtzman have previously teased the new villain. We know that whoever they are, it’s a “she”. It’s a new character that rules out Sela (Denise Crosby). However, thanks to the new teaser, we’ve got some speculation on a sure Star Trek: The Next Generation species’ potential involvement. Perhaps they are related to the enemy.

During the Star Trek: Picard Season 3 Trailer, we see Doctor Crusher (Gates McFadden) face to face with an alien species. If we go by trailer, it looks like this species is boarding her ship. However, have we seen them before? They seem to make a clicking sound when walking around with their weapons. Additionally, wearing hoods to disguise and cover their heads.

Trekkies have quickly compared this species to a known Star Trek one. These would be the “Solanogen-based lifeforms” featured in The Next Generation’s “Schisms” episode. They practically haunted Commander William Riker (Jonathan Frakes). The lifeforms secretly abducted the crew of the USS Enterprise-D to perform experiments on them.

However, the species exists in subspace. Additionally, they could not survive without assistance in normal space. Their molecular structure was based on solanogen, a substance only stable in subspace. Therefore, if this species is Star Trek: Picard’s New Enemy, or one of them, they’ve found a way to survive.

The Solanogen-based lifeforms may have been an interesting Star Trek race. However, the creative team behind Star Trek: The Next Generation thought otherwise. Director Robert Wiemer, Brannon Braga and Michael Piller were disappointed by the look of the aliens. Therefore they decided not to bring them back, despite the open ending.

However, this was not the end for the species. Their storyline would continue in the MMO Video-game, Star Trek Online. During the game’s storyline, they’d become servants of the Iconians. Another long-standing Star Trek species we know little about. Additionally, the “Solane” bio-engineered the Parasitic Beings from TNG’s “Conspiracy” episode was revealed.

Therefore, if Star Trek: Picard’s New Enemy is something to do with the “Solane”, as they’re known in Star Trek Online, might this hint at other species’ involvement? We currently do not know about the mysterious aliens boarding Crusher’s starship. However, they are likely a new species unrelated to Trek’s past.

Season 3’s new villain has been teased for some time. Before that, we had constant theories on whether it would be Sela or someone we knew. However, Terry Matalas has stated that it is not Empress Sela. Additionally, the new villain is a “she”, played by someone we’ve seen before. However, they have not been in Star Trek.

While we’re aware the villain is a “she” and played by someone we’ve not seen in Star Trek before, this does not rule out a species we know. Therefore it is possible that Star Trek: Picard’s New Enemy could be someone like the Iconians. Rather one specific Iconian. Additionally, this would build into why we are seeing a servant species like the Solane.

We also see alien starships coming up on another Starfleet starship during the trailer. If this is Doctor Crusher’s ship, it will connect with the scenes of her facing down the unknown alien. However, Trekkies have compared some of the alien starships to that of the Elachi species. Another alien species featured in Star Tek Online and connected with the Iconians.