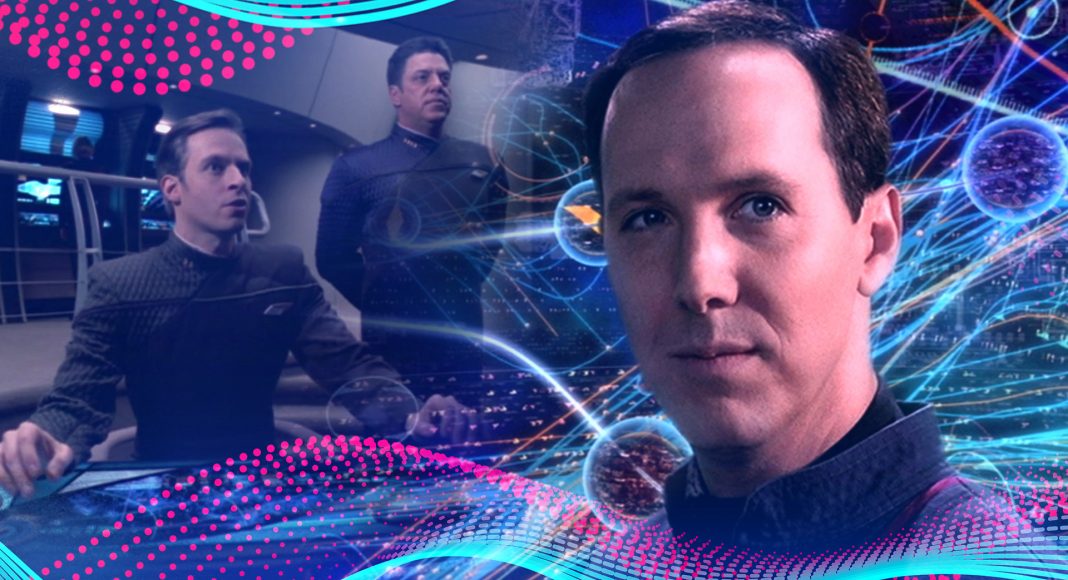 Are Star Trek’s Time Police Going To Show Up?

We all love a good Star Trek theory, don’t we! With this week’s episode of Star Trek: Picard Season 2 on the horizon, It’s time to go over a time travel-related theory right now. Of course, Picard Season 2 is all about time travel and fixing the past to save the future. What better time to talk about the organization within Starfleet that do just that. Star Trek’s Time Police, otherwise known as the Temporal Agents, or Department of Temporal Investigations. Time Agents in many forms have come and gone before, but are they back?

Yesterday’s preview for this week’s Star Trek: Picard Season 2 Episode 7 might have given a clue away. Additionally, we’ve also got another actor who has appeared before in Star Trek, reappearing in Picard. This would be Jay Karnes, who previously guest-starred in Star Trek: Voyager. We’ve also now got James Callis, who some theorize might be portraying a Starfleet Time Agent. Let’s explore more!

Time is broken. This is how the second season of Star Trek: Picard has been introduced. Now that we’re over halfway through the second season, we can clearly understand why it is broken. The entity known as Q (John De-Lancie) has corrupted the timeline, for what purpose, no one really knows yet. However, it seems Q wants to teach Jean-Luc Picard (Sir Patrick Stewart), some sort of lesson. Additionally, he also seems to want to teach humanity a lesson by extension. “The Trial never ends…”.

Picard’s crew is tasking themselves with fixing the timeline, to “save the future”. But in order to do so, they have to protect Jean-Luc’s ancestor of Renee Picard. All of this initially seemed rather crazy, and with the seventh episode this week, it is rather crazy. Many fans have asked before, where are Star Trek’s Time Police? Also, why haven’t they stopped this yet?

Surely Starfleet’s Time Agents, whose job it is to ensure the timeline does not get broken would be able to come and help this situation? Well, maybe not. If the future of the Federation and life as we know it, never existed, then maybe they didn’t either? Look time travel is weird like that. You change the past and then something in the future never exists. Though you would think that agents who are involved in time-travel would be able to protect themselves from this in a sense.

Time agents and Time Operatives have been seen in Star Trek before. Notable with Agent Daniels in Star Trek: Enterprise. However, Starfleet themselves appeared to employ their own time agents via Starfleet. Looking back at Star Trek: Voyager, we even ran in with some of them on multiple occasions. The USS Relativity was a starship that had a run-in with Voyager and carried an officer who as a connection with Star Trek: Picard, via the actor. This was during the 29th Century.

We’re of course talking about Lieutenant Ducane, portrayed by actor Jay Karnes. Ducane was serving on the USS Relativity under Captain Braxton and when the Captain went rouge, in the future, Ducane took command in the past. Confusing there right? Either way, thanks to eagle-eyed Trekkies, Jay Karnes has been spotted in Star Trek: Picard’s Season 2 Trailer.

Take a look below and you’ll see Karnes sitting across from Sir Patrick Stewart. Given the design of the room and the type of clothing both men are wearing, I would say this takes place in the past of 2024. Jay Karnes typically places law enforcement roles in series. He appeared in 12 Monkeys, a show by Picard Showrunner, Terry Matlas, as an FBI agent.

It may be the case that Karnes is not playing Ducane once again. He’ll likely just be playing your typical law enforcement officer. Perhaps asking why Picard was hit by a car, then carried away by strangers to an out-of-hours hospital. Though, if it was the character of Ducane, that would be fantastic. Imagine Captain Ducane showing up and James Callis being a part of his crew? Now I’m getting carried away here.

With yesterday’s reveal of James Callis appearing in Star Trek: Picard Season 2, many fan theories are raging online. One popular one is that Time Agents have arrived to fix the timeline. Given the appearance of Callis’s character, seemingly wearing a Starfleet Uniform, it could suggest he is some sort of temporal agent trying to fix the timeline? After all, the 29th Century Federation did have the “Temporal Integrity Commission”.

Originally we presumed Callis to be a villain. Hell at one point we thought it was Picard’s father, but for now, we simply do now know what is going on. Could it work to bring Star Trek’s Time Police into Picard Season 2 though? Time travel is confusing enough for the more experienced Star Trek viewer. However, adding even more into it could seriously confuse people.

I and the Trek Central team have studied the currently released promotional picture of James Callis well. One detail that we have noticed is the communications badge on the officer’s uniform. From the angle we see it at, it does appear Starfleet. However, not the Starfleet badges we see Picard wearing in 2401, or the Stargazer crew. This badge appears to be TNG/VOY era. Welcome to where the Time Agent theory also stems from. Of course, it could just be the lighting and Trekkies are thinking too much into it.

The latest episode airs on Thursday via Paramount+ in the United States, and on CTV Sci-Fi Channel and Crave in Canada. Additionally, the series is available on Amazon’s Prime Video in most international locations.