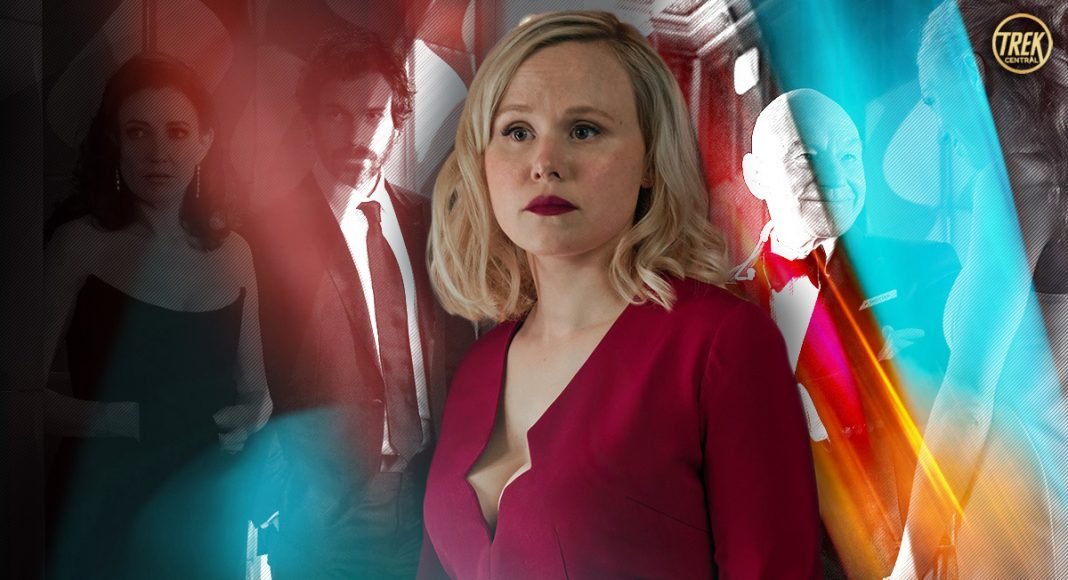 In my review last week of “Fly Me to the Moon”, I attempted to be positive about what that story was doing. For the first time, I thought Picard’s second season was detouring too much on the way to its final destination. But I stopped short of saying that episode was a filler. It teetered on that line, but in my view, it did not cross it. The same cannot be said for Star Trek: Picard “Two of One”, though, I think the episode title itself is a fun play on words for standard Borg designations.

Picking up where we left off last week, Picard and crew are sneaking into the Europa Mission gala, hoping to protect Renee Picard. Their interest is not solely on Renee. The fate of hundreds of years of the future is at stake. Last week seemed to set up an Ocean’s 11 style adventure, but nothing of the sort occurs. Jurati has positioned herself in with the facility’s security, set to grant Picard and company entrance into the gala. Jurati techs the tech to take out the security guards. Only to then realize that they possess the key to free her from handcuffs.

Cue the Borg Queen, who, despite being killed, is intrinsically connected to Jurati through assimilation. The Queen momentarily takes over Jurati’s body, and frees her, allowing her to grant the crew sufficient access to the gala.

Once inside, Picard and Tallinn bear most of the responsibility of the mission. Raffi, Rios, and Seven engage in a lot of busywork in the gala, but much of it does not amount to anything significant. In fact, Seven and Rios seem more interested in what a 21st Century party have to offer more than their mission. Rios and Jurati share a few moments, but instead of being a connective moment for the two, they seem to be setting up separate stories that take the characters in different directions. What was set up as this show’s version of an away team episode ended up being a lot of inaction from most of the crew.

Who Watches the Watcher

With clearance to the gala, Picard and Tallinn position themselves in a location to closely watch Renee Picard. Renee is clearly nervous at this event. Tallinn cautions Picard against direct intervention, as it goes against her code. But Picard’s determination is unwavering. He, more than Tallinn, understands the stakes. Tallinn’s focused on one person; Picard on an entire history.

As Picard tries to make his way towards Renee, he is stopped by none other than Adam Soong. Manipulated by Q as seen in last week’s episode, Soong is tasked to stop Renee from embarking on the Europa Mission, and with Q’s instruction, he knows that Picard must be removed from the equation. With his sizable donation, Soong wields his influence to have Picard removed. It nearly works, as facility security closes in on Picard to apprehend him on Soong’s request.

Thankfully for Picard, he’s not alone. The Borg Queen again assists with a one-two punch of surprises. On a more traditional front, power to the gala is cut, leading to darkness that allows Picard to elude the coming security. And in a surprise I’m still not over, Jurati breaks out in song to grab the audience attention. The song sequence, while lovely, didn’t quite work for me. It was tonally abrupt and didn’t make a lot of sense. The power had been cut, but somehow there’s a spotlight that magically follows Jurati, and the band jumps in with an unplanned song without missing a beat.

Thankfully, though, the double pairing of Picard and Tallinn and Jurati and the Queen continue to make the most of the terrific content they’re given. The situation with Jurati continues to demand my attention.

Meeting of the Picards

The height of “Two of One” comes when Picard meets his ancestor, Renee. Under the guise of a security guard, Picard has a moment alone with Renee. The tension here is high. We know what Renee doesn’t: she’s apparently a critical component to the future of Earth’s history. Renee is suffering from depression and anxiety, and seems ready to back out of the Europa Mission, in part, due to her “therapist”, Q.

Picard, like so many times before, uses an appropriately timed motivational speech to remind Renee of her worth, as a person and as an astronaut. This was true Captain Picard on display, and Stewart didn’t miss a beat. We don’t get many of these moments in Picard, and so it’s wonderful to see and I think the show could use more of this.

As Picard and Renee walk back to the gala, they are targeted by Adam Soong, who is racing his car in a deliberate attempt to hit Renee. Picard pushes her out of the way, only to take the brunt of the hit.

As Soong returns home, he is distraught and discusses with his daughter, Kore, that she is all that matters and is the culmination of his life’s work. Obviously curious, Kore googles her father and discovers that he is a scientist gone mad, unhinged, and apparently responsible for many failed attempts at previous daughters. All of this seems odd, and quite unbelievable that Kore would not know more about her father until now. It’s also a retread for Isa Briones’ character, Soji, in Picard’s first season.

Between the Tallinn and Laris similarity and the Soji-Kore thematic likeness, there’s a bit too much coincidence going on not to question. I suspect all of this will relate to whatever Q has done to alter the timeline. The sooner we understand Q’s motivation, the better. Six episodes in, and this continues to be the big question, and some form of the answer needs to be established soon.

The La Sirena crew rushed Picard to the only doctor they know of, and one who won’t ask questions: Dr. Teresa. With Picard’s vitals failing, he is given life support treatment, and the shocks against his synthetic body startle everyone. But the measure works, and Picard’s physical health returns despite being unconscious. A scan of his mind reads a lot of activity, leading the others to interpret that Picard is somehow stuck in this state. Tallinn suggests that she can use her ability as a Watcher to go into his mind and retrieve him.

Overall, this short entry sputters a bit, and while not really advancing the overall story in any significant way, it was still a lot of fun to watch. I wish all the crew had something more substantial to do during the mission at the gala. With only four episodes remaining, there’s a lot of ground still to cover and more layers to the story being added.

? – James Callis Is A Villain In Star Trek: Picard?