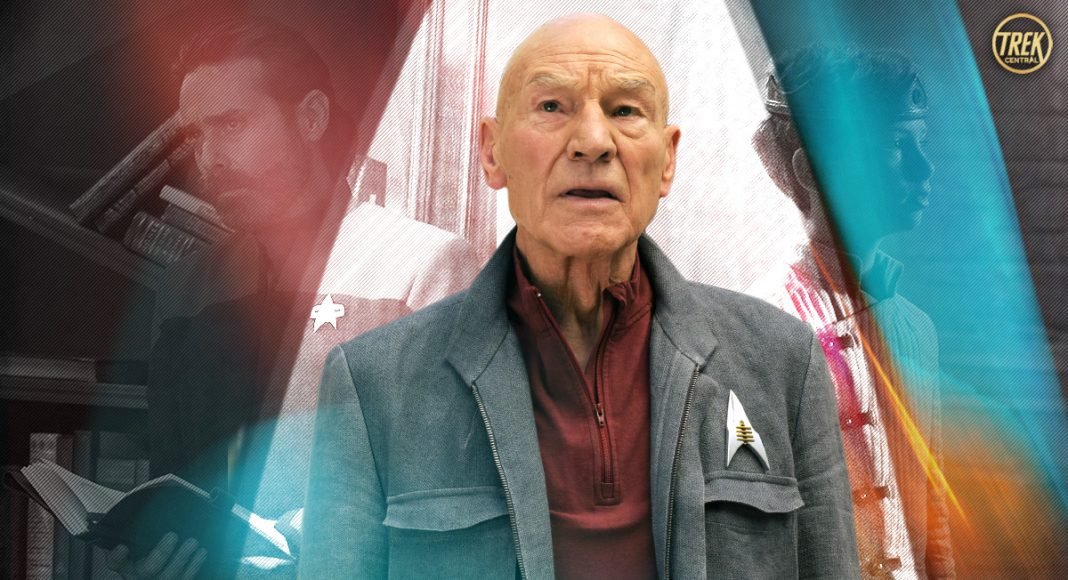 Last week I criticized “Two of One” for veering too far off the trajectory of the season’s story. In many ways, Star Trek: Picard ‘Monsters’ does not course correct, but instead of wandering somewhat aimlessly, it sets up and establishes a wonderful character study of Picard that has been teased for most of this season. As you keep reading, you’ll find that I’m quite positive on Picard’s journey in this episode, although I’m far more mixed on the B and C stories. Star Trek: Picard ‘Monsters’ is truly about Picard as a character, and when that occurs in this series, it tends to soar. So let’s dive in.

Given that the character of Jean-Luc Picard has been with us through nearly nine seasons of television and four films, we know surprisingly little about his family life. The most we get is from the excellent fourth season episode of The Next Generation, “Family”, in which Picard returns home to the Chateau to see his brother and his family following his assimilation by the Borg.

There we learn of the tumultuous relationship that existed between the two Picard brothers, and likewise, deduce that Robert followed much more in their father’s footsteps than Jean-Luc. We know little of their parents. Little bits of information are provided throughout The Next Generation’s run, and this season of Picard has promised to build upon that established lore.

So here we are, starting Star Trek: Picard ‘Monsters’ in Picard’s subconscious. The result of last week’s accident. The setting is unsettling. It’s a room similar to one of his Enterprise-ready rooms but isn’t a replica. There are decorative elements there that are familiar. And he is not alone. He is joined by a Starfleet counselor, in a uniform that again contains many familiar pieces but is not one of Starfleet’s actual uniforms.

Picard’s therapist is played by James Callis, and he and Patrick Stewart spar in a match for how much information Picard is willing to divulge about his life. Picard is immediately defensive, unwilling to participate in the session. The therapist calls him out, “even your closest friends call you ‘Captain’”. Picard acknowledges some of what the therapist vocalizes. Picard is indeed afraid, particular of feeling trapped. And that is part of his motivation for exploring the stars.

Picard tells a story of his mother, the “queen with red hair”, and quickly the ready room dissipates and evolves into Chateau Picard. We witness Picard as a child and with his mother, a mother who he refuses to leave as she is threatened by a monster. There’s some fun harkening to horror movie tropes going on, but what is riveting is the Picard storyline at play. His mother evokes an important line, “there’s no better teacher than one’s enemy”.

There’s a reality that enters Picard’s subconscious. He’s not alone. Tallinn is able to enter his mind using some of her “supervisor” abilities. She is disoriented as she enters. She hears echoes of Picard’s cries for help during his missions (his assimilation by the Borg, his torture at the hands of Gul Madred). As Tallinn ventures further into the recesses of Picard’s mind, she moves backward in time to meet him as a child, where Picard’s deepest trauma awaits. She’s there to help navigate Picard out of his current state. And she too will need to process what she sees.

The faux therapy session becomes real when Picard admits he is “stuck”. Picard acknowledges that he holds people are arm’s length, hiding from his guilt and shame behind the veil of his virtuous position as a decorated officer.

Picard finally comes face to face with the real monster, and in a twist I frankly saw coming, the therapist is his Jean Luc’s father, Maurice. We learn quickly that Picard is an unreliable narrator, and his memories of his childhood are faulty. His father wasn’t the abusive man towards his mother. His mother was unwell, and his father had to protect Jean-Luc from some of his mother’s behaviors.

Back in Los Angeles, Seven and Raffi become alarmed that Jurati has disappeared. They return to La Sirena to track her last steps. In the mix of it, Raffi makes a quip that Jurati and Rios are a “side story”, and I find myself agreeing with that assessment for Star Trek: Picard ‘Monsters’. More on that bit later, but Seven and Raffi ultimately begin tracking down Jurati’s steps in Los Angeles, and are frightened to learn that the Borg Queen is slowly assimilating Jurati. Seven, with years of existential experience with the Borg states the obvious: Earth could be assimilated. It’ll be curious to see where this story goes. The Jurati-Queen storyline has been fantastic this season, and while it takes a backseat in this one, it continues to have my attention. I’ll admit that Seven’s concern that the Queen will assimilate 21st Century Earth sounds a little like Star Trek: First Contact, this plot has not let us down thus far, and the surprises continue to be compelling.

Rios, meanwhile, has a truly baffling storyline that I still can’t wrap my head around. He knows that Teresa is going to suspect more about him and the others, and is likely to encounter Tallinn using space tech to assist Picard. Rios starts off on track, realizing he will need to let Teresa into some of their secrets. And with Picard becoming unstable, Rios hands Teresa a 24th Century medical device to aid Picard. How Teresa is able to use this with very little instruction is beyond me. But more unreal is what Rios later does – beams her and her son to La Sirena for no explicable reason.

I’ve got to admit that I’m a bit disappointed in Rios’ story this season. He hasn’t shown a strong desire to return to a ship he commands. I get the feeling that Rios won’t be returning to the 25th Century, and that may be seeing the setup for the character’s exit, which in my view would be a loss for the show if that prediction comes to pass.

With Picard successfully awakened, he and Tallinn plan their next steps. Tallinn is wanting to pause, astutely realizing that Picard is not done processing his family trauma. But Picard is having none of it. There’s still a mission to embark on, and he will not be stopped. Tallinn states that Renee Picard is safe, and there’s no sign of Q. And oh yeah, Tallinn is a Romulan!

The main story has strayed a bit from whatever Q is up to, and with only three episodes remaining there’s a lot of explaining to be done. But we are not left empty-handed. With Tallinn’s help, Picard embodies his mother’s advice that there might not be a better teacher than his enemy — in this case, Q. Whereas in the past, Q has put Picard on trial. But Q’s return to Picard in this late stage of his life is peculiar. Q is different. Picard deduces that perhaps it is Q himself that is on trial, and Picard is the one to help.

Let’s Have a Drink

Picard has an ally in Los Angeles, and one he asked to stay put. Guinan is back in the picture, as Picard asks for her help in getting Q’s attention. Guinan is reluctant to get Q to the bar, and in doing so, tells the history of the El Aurians and the Q. There’s a longstanding truce to war between the two species. That truce is stored in a drink bottle that has been corked for ages. Guinan uncorks the bottle, which brings tremors into the bar. She expects a Q to appear. But it doesn’t happen.

When I first heard that both Guinan and Q would be featured in this season of Picard, I feared that the writers would try to explain the mysterious relationship that was established in the early seasons of The Next Generation. And they did. I can’t say I’m satisfied with the explanation that has been provided. But I’m not sure if I would have been satisfied with any explanation.

I’m a firm believer that not everything needs explaining. Some things are best left as a mystery, and I think that is the case for the Guinan-Q dynamic. Thankfully the backstory given still leaves much to the imagination. Nevertheless, I did appreciate that the writers subverted what they set up, that Guinan thought that she could get Q’s attention. And instead, she gets an FBI agent.

Actor Jay Karnes was featured in the season trailers, and speculation ran rampant that he might be reprising this Voyager role as Ducane, one of the “Time Agents”. I wasn’t getting my hopes up that this would be the case, as it would be a lovely continuity thread between series. And perhaps I still shouldn’t have my hopes up. But everything about his entrance seemed off. I don’t think he is a mere FBI agent. I think he’s Ducane, and we’ll find that out next week as he has apprehended both Picard and Guinan after footage of Picard’s beam-in was captured. I’ll own up to this next week if I’m wrong.