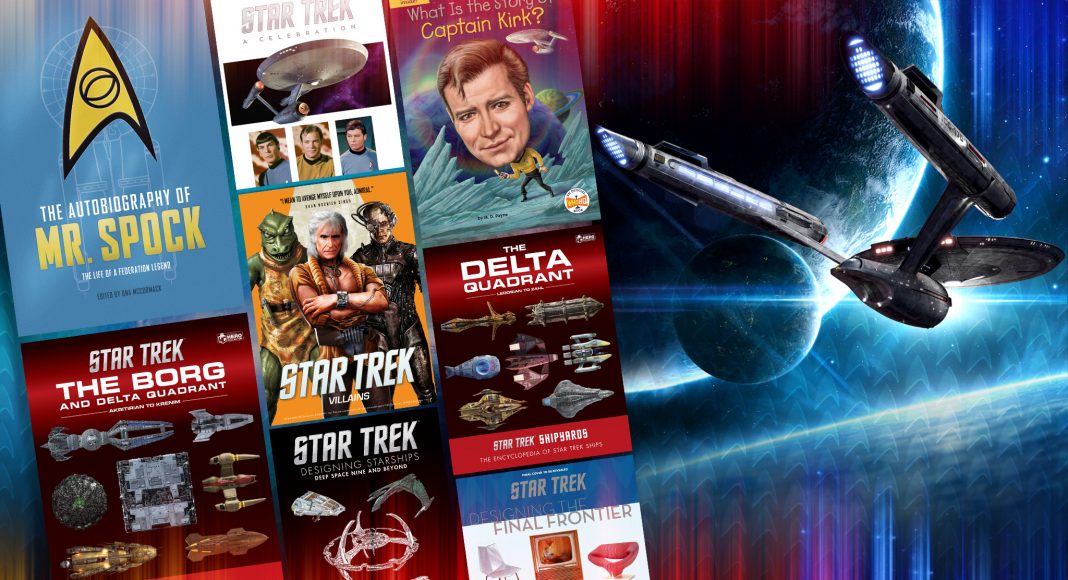 Not only are there a slew of new Star Trek novels being released in 2021, but we’ve also got new children’s books, and a number of glossy, non-fiction and reference hardbacks hitting the slate for this year. From a follow up to Hero Collector’s ‘Quibble with Tribbles’, to a look at Star Trek’s Villains, and some comprehensive, picture-packed (including new CG designs) ship encyclopaedias. All are currently available to pre-order and no doubt there’s more on the way!

STAR TREK SHIPYARDS: THE BORG AND THE DELTA QUADRANT – AKRITIRIAN TO KRENIM

From the Publisher: Featuring ships of the Borg and vessels of the Delta Quadrant, the first of two companion volumes of ships from STAR TREK: VOYAGER.

This volume begins with the ships operated by STAR TREK‘s greatest villains: the Borg, including the Borg Cube and Sphere, the Borg Queen’s Ship, the Renegade Borg Vessel and the Borg Tactical Cube. From there, it profiles more than thirty-five ships operated by the species Voyager encountered in the Delta Quadrant, featuring ships from A – Akritirian to K – Krenim.

With technical overviews and operational histories, the ships are illustrated with CG artwork – including original VFX models made for the show.

After you read this, be sure to check out the companion volume – THE DELTA QUADRANT: Ledosian to Zahl, which profiles more than 50 ships of the Delta Quadrant species, among them the Lokirrim Warship, the Species 8472 Bioship, and the Vidiian Warships.

From the Publisher: Profiling more than 50 ships that Voyager encountered in the Delta Quadrant, this is the 2nd of two volumes that profile the ships from STAR TREK: VOYAGER.

Featuring the Lokirrim Warship, the Species 8472 Bioship, and the Vidiian Warships, and many more. Including technical overviews and operational histories, the ships are illustrated with CG artwork, created using the original VFX models made for the STAR TREK: VOYAGER TV series.

With previously unseen artwork, the two official volumes form the most comprehensive account of ships from STAR TREK: VOYAGER ever produced.

Be sure to also look for Volume 1, The Borg and Delta Quadrant: Akritirian to Krenim, which features the ships of the Borg, and includes the Borg Cube and Borg Sphere, Borg Queen’s Ship, the Renegade Borg Vessel and the Borg Tactical Cube, in addition to thirty-five ships of the Delta Quadrant species.

From the Publisher: Celebrate Star Trek: The Original Series and the show’s distinctive Mid-Century modern design that would change design– and television– forever.

Star Trek: The Original Series (1966-1969) was the first installment of one of the most successful and longest-running television franchises of all time. Today, “Trekkers” champion its writing, progressive social consciousness, and aesthetic. Designing the Final Frontier is a unique, expert look at the mid-century modern design that created and inspired that aesthetic. From Eames chairs to amorphous sculptures, from bright colors to futuristic frames, Star Trek: TOS is bursting with mid-century modern furniture, art, and design elements—many of them bought directly from famous design showrooms.

Author and mid-century modern design expert Dan Chavkin has created an insider’s guide to the interior of original starship Enterprise and beyond, that is sure to attract Star Trek’s thriving global fan base.

Over the 50 incredible years of Star Trek TV shows and movies, the franchise has produced many stand-out villains.

Collected here are features on some of the very best – or worst – villains and classic interviews with the actors who portrayed them. Includes the Borg (Alice Krige as the Borg Queen), Khan (Ricardo Montalban, Benedict Cumberbatch), Q (John de Lancie), Shinzon (Tom Hardy) and many, many more.

From the Publisher: Showcasing the concept art behind the Deep Space 9 station itself, the U.S.S. Defiant and dozens more ships from the award winning Star Trek series.

Deep Space 9 is considered by some as the best Star Trek series.

The fifth in the series of Star Trek Designing Starships is built around original production art and extensive interviews with the station and ships’ designers, explaining exactly how the ships came into being. The award-winning series Deep Space Nine ran for seven seasons and 176 episodes, from January 1993 to June 1999.

Following the success of Star Trek Voyager: A Celebration, this second volume in the series focuses Star Trek: The Original Series. The book will be released in the week of Star Trek’s 55th anniversary.

Gene Roddenberry’s series changed television forever and created a broadcast phenomenon, and world that continues to influence our culture today.

With a curated selection of archive interviews, personal recollections from cast and crew, and new interviews specially undertaken for the book, the chapters explore the writing, directing, production art and visual effects, plus classic episodes from the show’s three season run.

THE AUTOBIOGRAPHY OF MR. SPOCK

From the Publisher: Fictional autobiography of the iconic Star Trek character, told in his own words and telling the story of his life, including his difficult childhood, his adventures on the Enterprise, and his death and resurrection on the Genesis Planet.

“The Autobiography of Mr. Spock” tells the story of one of Starfleet’s finest officers, and one the Federations most celebrated citizens. Half human and half Vulcan, the book, written in Spock’s own words, follows his difficult childhood on the planet Vulcan; his controversial enrollment at Starfleet Academy; his adventures with Captain Kirk and the crew of the Starship Enterprise; his diplomatic triumphs with the Klingons and Romulans; and his death and amazing resurrection on the Genesis Planet. We meet the friends he’s made, the women he loved, and experience the triumphs and tragedies of a life and career that spanned a century. Despite his alien blood, his struggle to find his place in the universe is one we can all relate to.SEE LESS

NOTE: This is the long delayed book that was originally slated to be written by David A Goodman & released in 2019.

From the Publisher: This volume in the Star Trek Shipyards series features the Alpha and Beta Quadrant ships encountered by the Federation in those sectors of the Galaxy.

Includes ships from Star Trek: The Next Generation, the original series, and Deep Space Nine including the Breen, Cardassians, and Ferengi. Companion volumes will include ships of the Romulan fleet, allies, and adversaries.

From the Publisher: STAR TREK: DISCOVERY through a cat’s eyes: find out what Grudge the  cat really thinks of the planets, the ships and all of the people she meets in the course of her travels.

Grudge is a “Queen,” and she knows it. Everyone – her so-called owner, Cleveland “Book” Booker, Michael Burnham, Ryn, Zareh, and Tilly – bows down to her, some more willingly than others. And nothing, not extended periods in space, not ship-rattling attacks from enemies, rattles her. Ever. She’s a cool kitty with a ’tude. We call it “Cattitude.”

As a cat, Grudge, has a particular take on the universe, her seeming indifference masking a wit as sharp as her claws.

•  Wit and wisdom of STAR TREK from a whole new point of view.

•  A combination of illustration, and photography from STAR TREK: DISCOVERY SEASON 3.

From the Publisher: Think you know Star Trek: The Next Generation like no fan has done before? Well make it so and take up our unique puzzle challenge!

Following the hit ‘Quibbles with Tribbles,’ here comes the sequel… STAR TREK: THE NEXT GENERATION. This Nerd Search takes your favorite show and adds annoying mistakes that only a true Trek Nerd could spot! This is next level ‘Where’s Waldo,’ for the fanatical adult fan.

In this fully-illustrated book, the Borg have created time-travelling Chaos-Cubes that break down reality as we know it. You must spot the cubes, and save Picard’s voyages as we know them.

On another level of complexity, the reader must spot five CONTINUITY ERRORS caused by the Chaos Cubes, like characters in the wrong costume, or scene … or series!

Finally, we have hidden ten random items from every season of Next Gen in every scene. Spot these rogue elements and name the episode if you can!

Also spot 5 Super Quibbles, for the next level fan. These are things that only fans who peer behind the scenes will know about!

We will be revisiting classic episodes like Best of Both Worlds, The Big Goodbye and Encounter at Farpoint. Watch out for sneaky Ferengi, hairy Klingons, and quirky ‘Q’ madness.

Top score is the magic number of 11001001. If you want to prove you are the greatest Next Generation expert ever, here’s your chance to make it so!

WHAT IS THE STORY OF CAPTAIN KIRK?

From the Publisher: Journey to deep space and learn how James Tiberius Kirk became one of the greatest space heroes in the Star Trek universe.

From appearances in live action and animated television shows, a series of films, comics, video games, and more, James T. Kirk is an established space captain in pop culture.

Star Trek remains one of the most popular science-fiction series of all time, and Captain Kirk is one of the most famous and highly decorated captains in the history of Starfleet. As the commanding officer of starships like the U.S.S. Enterprise, viewers follow his adventures through space. But did you know that Kirk wasn’t even the show’s first Captain? And that the Star Trek series almost didn’t happen?