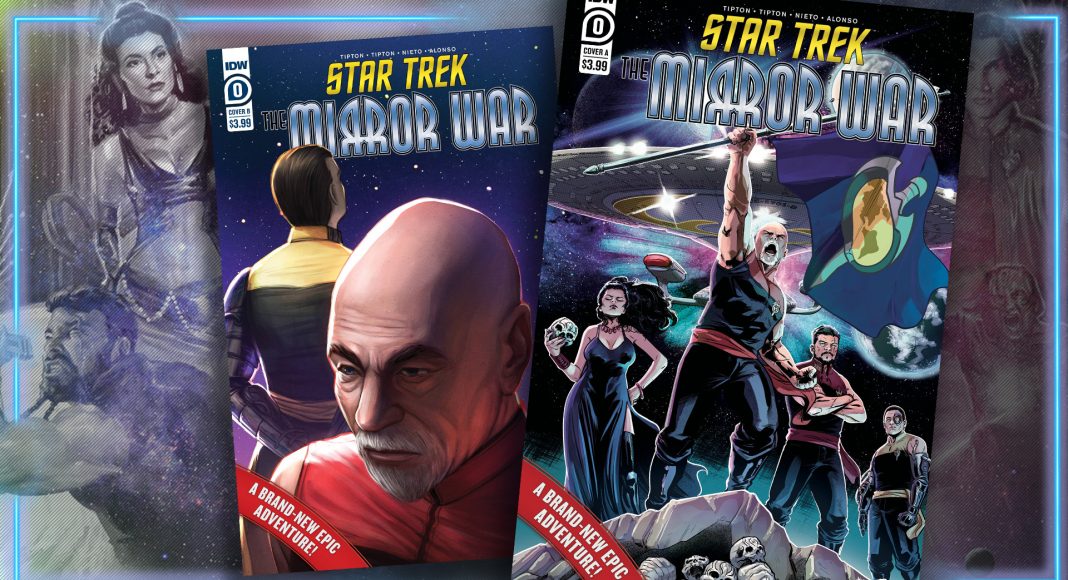 Star Trek’s mirror universe is a look into a darker, more sinister side of the world and characters we know. One where the heroes are villains and the philosophy of “to boldly go” has been replaced with “to boldly conquer.” This alternate take on the characters and stories of Star Trek has been featured in many series including The Original Series, Deep Space Nine, Enterprise, and Discovery. But one series, The Next Generation, never delved into this mirror universe. It is only fitting that with the power of comics, we can finally see what an alternate “evil” take on the crew of the Enterprise-D might look like.

IDW’s The Mirror War #0 serves as the prelude to an upcoming event miniseries, one which will see an internal struggle for control of the Terran Empire and a clash between the mirror universe and the prime universe. The Mirror War introduces us to a more battle-hardened and aggressive crew of the Enterprise-D than we are used to. Captain Picard is power-hungry and ruthless in battle. Counselor Troi is now Inquisitor Troi, tasked with using her empathy to uncover information about the enemy. Data is still logical and precise but filled with a rage uncharacteristic to his prime universe counterpart. And Worf is nowhere to be seen since the Klingons are at war with the Terran Empire.

The characterization of these mirror universe counterparts is wonderfully devious, with each displaying the worst qualities of their prime universe selves. Captain Picard of the mirror universe is in essence an entirely different character. Gone is his tempered and diplomatic attitude and in its place resides an angry, bitter man hellbent on conquering the galaxy. It continues the legacy of previous iterations of the mirror universe, highlighting how one minor cultural shift could send our characters down a wildly different destiny.

The story of The Mirror War picks up after a previous story set in this mirror universe, when an attempt to steal the prime universe Enterprise-D and bring it into the mirror universe fails. The mirror crew is then summoned back to Earth for a reprimanding by the Emperor himself. But the Emperor is a weak old man, supported by the likes of Admiral Nechayev, a fun nod to one of TNG’s more minor characters. Furious at the state of the empire’s leadership, Picard vows to kill and usurp the emperor to become emperor himself. Quite the shift from the wine and Shakespeare loving Picard we know.

Another subplot of the issue involves the recovery of the mirror universe’s Reginald Barclay, who escaped to the prime universe to try to replace prime Barclay. Once mirror Barclay is recovered, he is sent to Inquisitor Troi to divulge everything he learned about the prime universe. With Barclay as an informant, the mirror universe should have everything they need to conquer the galaxy.

The Mirror War #0 sets up the potential for an exciting clash between the universes and the potential upheaval of the Empire’s leadership. While this issue relied on many crossover stories to fully understand, this is the perfect jumping-on point for this new story arc. The fate of the mirror universe will be decided when this series kicks off next month.