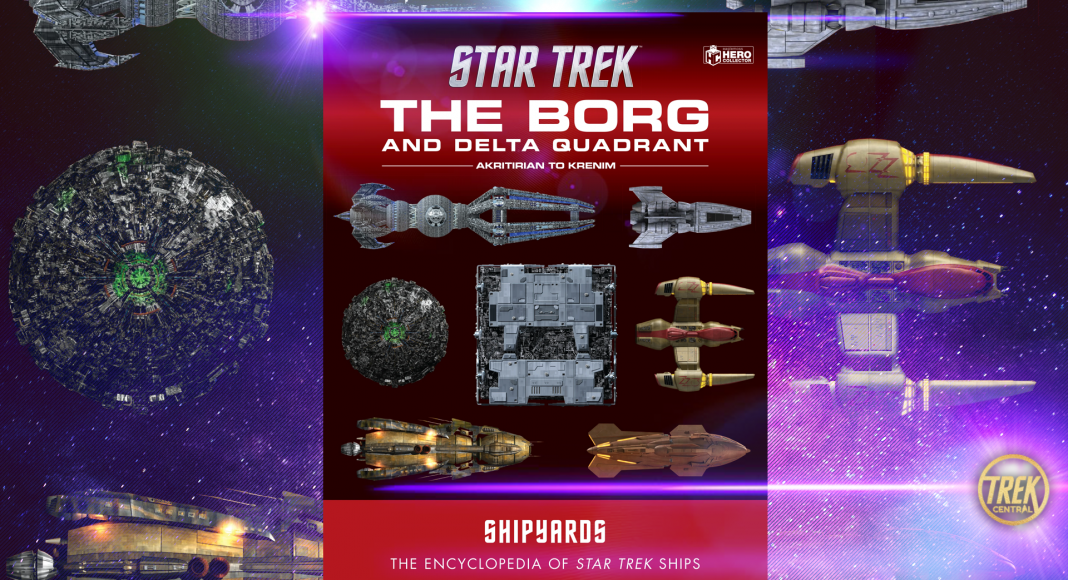 ‘The Borg and The Delta Quadrant: Akritirian to Krenim’, the fifth entry in the Star Trek: Shipyards series from Hero Collector arrives today!

Released today is the latest entry in the very popular Hero Collector Shipyards series of books. A series of books that take a deep dive into the various starships and space stations that have graced the screen over Star Treks 55 years. Detailed, amazing illustrated and created by people who have an obvious love of the franchise, these books have become nothing short of go-to guides for all fans.

Following on from the likes of ‘Startfleet Ships 2294 – The future’, ‘Federation Members’ and the ‘Klingon Fleet’ comes the release of the first of two volumes that will focus on ships featured throughout Star Trek: Voyager’s seven-season run. ‘The Borg and The Delta Quadrant: Akritirian to Krenim’ features illustrations created using original CG models from the series and will bring us in-depth looks at some of the greatest ship designs from the franchise including those from the Federations greatest enemy. The Borg.

Images from The Borg and The Delta Quadrant: Akritirian to Krenim
1 of 3

This volume – written by veteran STAR TREKTM authors Marcus Riley, Ian Chaddock, and Mark Wright – opens with the fearsome ships operated by STAR TREK‘s greatest villains: the Borg, including the Borg Cube and Sphere, the Borg Queen’s Ship, the Renegade Borg Vessel and the Borg Tactical Cube. Beyond the Borg vessels, fans can take a deep dive into 35-plus ships operated by the various species Captain Janeway and the U.S.S. Voyager crew encountered during their adventures in the Delta Quadrant, spanning from A (the Akritirian patrol ship) to K (the Krenim warship).

The ships are illustrated using the original CG models created for the show, which have been retrieved from the archives, uncovering some hidden gems that will delight fans who thought they knew everything. Riley, Chaddock, and Wright complement the illustrations with detailed technical overviews and operational histories. THE BORG AND THE DELTA QUADRANT: Akritirian to Krenim will be followed later this summer by THE DELTA QUADRANT: Ledosian to Zahl, which profiles more than 50 ships of the Delta Quadrant species, among them the Lokirrim Warship, the Species 8472 Bioship and the Vidiian Warships.

The second volume, ‘The Delta Quadrant: Ledosian to Zahl’ is expected to arrive sometime in the summer and we will bring you details on that when we have them. In the meantime, volume one ‘The Borg and The Delta Quadrant: Akritirian to Krenim’ is out now and is available to purchase from all good online retailers (prices will vary) or direct from Hero Collector themselves.

More on the Authors:

Marcus Riley is the editor of Eaglemoss’s STAR TREK Official Starships Collection, a veteran of the STAR TREK Fact Files reference work and the Briefings Editor of the U.S. STAR TREK: The Magazine, which ran between 1999 and 2003. Riley also co-wrote the U.S.S. Enterprise Haynes Manual.

Ian Chaddock is a writer and editor who has worked extensively on sci-fi, television, film, music and popular culture in a career in entertainment publishing spanning almost two decades. As well as STAR TREK, his credits on film and TV tie-in publications include Rick and Morty, WWE, MARVEL, and DC. He has also contributed as a Deputy Editor for various music publications.

Mark Wright is a journalist and author and has written many audios, short stories and comic strips featuring new adventures for Doctor Who, along with tie-ins to other series such as The Power Rangers and The Sarah Jane Adventures. He is a regular contributor to Doctor Who Magazine and co-wrote Hero Collector’s upcoming book, Battlestar Galactica: Designing Spaceships.