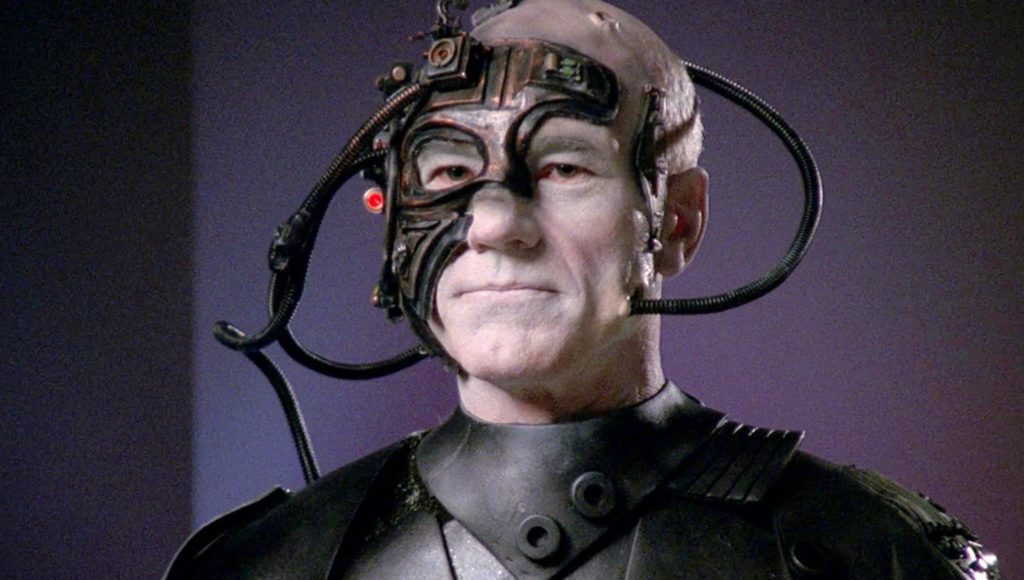 “I am Locutus of Borg… Resistance is futile” 30 years later those words still resonate following one of the greatest cliff hangers in TV history.

The concluding chapter of Star Trek: The Next Generations first season spanning two-part episode was aired 30 years ago today and in doing so, brought to a close what many consider to be one of the greatest story arcs not just in the history of Star Trek, but in TV.

The shocking finale of Season 3 which aired on June 18th 1990, saw Captain Jean Luc Picard captured and assimilated by one of the fiercest enemies every written in the franchise, The Borg. Responding to a distress call the Enterprise visits a Federation colony only to find it erased from the planet surface with evidence to suggest that The Borg was responsible. Introduced in episode 16 of the second season ‘Q Who’ the Borg first encounter Human beings and the Enterprise barely escapes having to throw themselves on the mercy of Q, the being responsible for the introduction in the first place. The episode ends with Whoopi Goldbergs Guinan’s eerie observation that the Borg are now aware of Humans.

“They will be coming?” A fearful realisation hitting Picard.

“You can bet on it” replies Guinan

And that is exactly the premise for the opening chapter of this two-part masterpiece. The Borg are indeed coming.  The introduction of Commander Shelby, an ambitious, upfront, and direct character classed as an expert on the Borg, who in no certain terms declares to Riker that she wants his seat on the Enterprise. An underlying plot to this episode is the news that Riker has been offered his own command and he has been encouraged to take it.

An interesting fact to these episodes is that the writer, Michael Pillar considers them to be Riker focused and had written the quandary of leaving the Enterprise or not that Riker faced because it mirrored his own situation as he himself was considering leaving Star Trek as Executive Producer, thinking it was the right time to move onto other projects, however, Gene Roddenberry and Rick Berman both convinced him to stay.

Later in the episode, the Enterprise confronts the Borg cube and Picard is captured, an away mission to rescue the captain is unsuccessful, with the team only finding Picard’s uniform and communication badge. They manage to stop the Borg ship from travelling and before beaming back to the Enterprise they see the assimilated Picard. The cliff-hanger ends with Picard contacting the Enterprise and uttering the infamous words “I am Locutus of Borg, resistance is futile” and the Enterprise preparing to fire on their captain using the modified deflector dish as a weapon.

Thankfully, fans did not have to wait too long for the concluding part, only 3 months but to many, it was a long time to wait. In this months SFX magazine it has printed a fun fact relating to a leaked script that found its way to fan bulletins in order to prank the fan base. It seems that a fake page was inserted into a script that was then left around the art department by Michael Okuda which was duly pilfered and found its way to the outside world. Its eluded to the whole experience being nothing more than a dream, similar in nature to the storyline in Dallas that retconned Bobby Ewings death by him appearing in a shower and the last season or two being nothing but make-believe. In Okuda’s leaked version “I think it was either Riker or Picard in the sonic shower, and Q just appears and says ‘surprise!’” Could you imagine such a prank being played out now with the internet the way it is, a meltdown of epic proportions could have ensued although it would be fun to see the reactions on the Fan bulletins.

There was also another reason for fans to be worried about the fourth season opener and conclusion to ‘The Best of Both Worlds’. It’s well known that Patrick Stewart was not happy on the set. He himself has stated that once he was cast, he did not think it would go past the first season.

“My agent in Hollywood… he assured me, ‘Don’t worry, this thing isn’t going to work. You’ll be lucky to make it through the first season.’

“‘You cannot revive an iconic series like Star Trek, so you know, come over and make a bit of money for the first time in your life, get a sun tan then go home.'”

His agent was 178 episodes and 4 movies of wrong. This could however play a part in his unhappiness. It’s no secret that Stewart was the serious one on the set and even during the recent Star Trek Day celebration via the Picard panel, he states that he was an arse to the rest of the cast because they didn’t take it as seriously as him. He, of course, lightened up over the following years but having to continue to work in this environment obviously had an impact on him. Following these rumours, more found themselves in the public domain when it was suggested that there were contract disputes which could lead to Picard being killed off. An impasse was reached between Paramount and Stewart with the possibility of Jonathan Frakes taking up the Captain’s chair and Elizabeth’s Dennehys Commander Shelby being the ships new number 1.

Thanks to Williams Shatners amazing documentary ‘Chaos on the Bridge’ recounting the turbulent first three years of TNG we get to know a bit more about what happened. Below is an extract from a SYFY Wire article posted in 2015:

The issue with Stewart eventually went up the ladder to John Pike, head of Paramount Television, who decided he’d settle the matter through a lunch meeting with Stewart. Pike, who knew how to play the Hollywood game, scheduled the lunch when he knew Stewart wouldn’t have time to change out of his costume, and deliberately arrived 15 minutes late, so Stewart would have to sit alone in the executive dining room on the Paramount lot dressed as Captain Picard. When Pike finally arrived, he wasted no time.

“I say, ‘Patrick, let’s just cut through it. I do know that you’re creatively not being taxed. You’re going to have to bear with us for a couple more weeks, but we have already put the script in the works and we will write your character out,'” Pike said.

Stewart asked Pike, “What are you talking about?” and Pike responded, “The one thing I don’t want is my lead actor unhappy.” Instead of calling Pike’s bluff, Stewart apparently relented, and according to Pike, he “never had another discussion” with Stewart about the issue.

And now the conclusion…

The return of ‘The Best of Both Worlds’ on September 24th 1990 saw the deflector dish weapon failing to have any impact on the Borg as they warp off to Federation space – leaving a damaged Enterprise behind – to face off in an epic battle with Starfleet at Wolf 395. Due to budgetary restraints, it was not possible for the special effects department to come up with a huge space battle, so instead opted to see the aftermath of the confrontation. Some of the battle we do see in the Deep Space 9 opener ‘The Emissary’, a battle that has lasting implications on the universe not as much as on the Commander of Deep Space 9 himself, Benjamin Sisko who lost his wife in the battle, something he later holds Picard responsible for personally.

The battle was a massacre of the fleet as the Borg utilised Picard’s knowledge of Federation defences – combined with Borg technology – Starfleet never stood a chance. Breaking an order not to follow the cube, Riker separates the saucer section from the ship and begins to pursue and using knowledge from Shelby, they manage to pass through Borg shields and materialise on their ship.

Once back onto the USS Enterprise, Doctor Crusher and Data create a neural link with Locutus which gives them access to the Borgs collective consciousness. Struggling to send commands to the Borg cube to disable weapons and defences Picard, manages to break through his Locutus exterior to utter the words “sleep”, a clue to how Data can stop the Borg attack. Using the Neural link, Data sends a command that all Borg drones need to regenerate and in essence, puts them to sleep, a feedback loop is created and the Borg Cube destroyed, breaking a traumatised Picard from the collective and allowing Crusher to remove the implants.

The episodes also offered a challenge to write. The Borg is a collective mind and not any one individual so its difficult to write a true focal point for the crew’s interactions. It was suggested in the writing room that they incorporate a Borg Queen, but that idea was put aside and later used in the feature First Contact and in subsequent Voyager episodes. By assimilating Picard, Locutus became that focal point for the Federation and the Borgs and help build on that emotional connection.

‘The Best of Both Worlds’ went on to win an Emmy for ‘Outstanding Direction for a Series’ and ‘Outstanding Sound Editing for a Series’ but it did far more for Star Trek. For the first time, we got a real sense that this series was now far and away from its predecessor and really coming into its own while managing to work within the restrictions set by Gene Roddenberry and expanding our characters. It has consistently topped fans polls for best episodes and appeared in top ten of all of Star Trek. And no matter how much Star Trek there is ahead of us I do not believe that any episode can match the impact ‘The Best of Both Worlds’ had on the Star Trek Universe.

We hoped you liked this article and if you have any comments please let us know and don’t forget to follow us and get involved via our social media platforms: