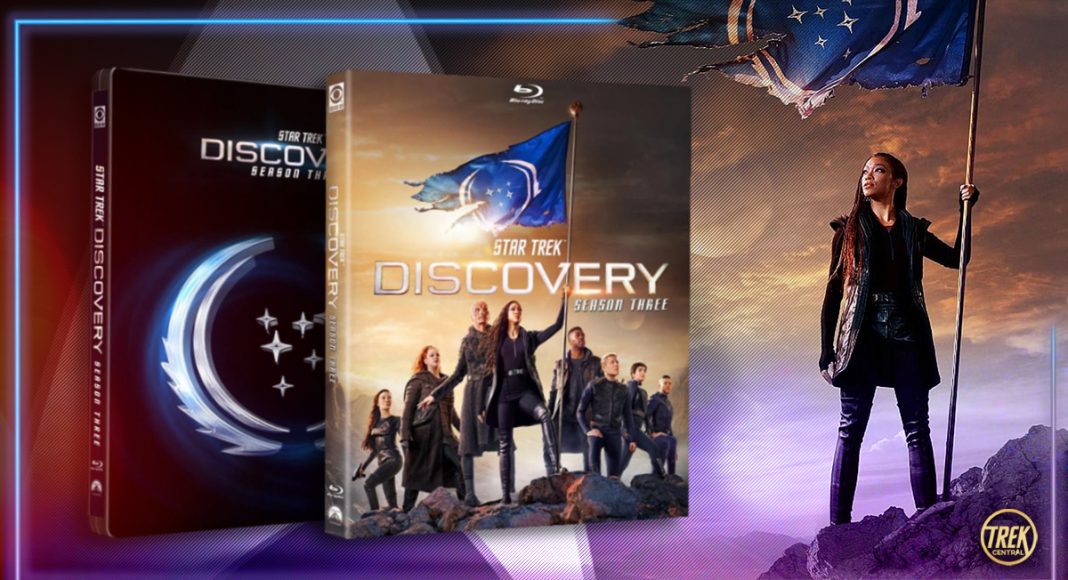 We finally have release information for Star Trek: Discovery’s third season, arriving July 20th in the US & Canada. The season 3 boxsets are available on DVD and Blu-ray, including a Steelbook edition, and will include over 2 hours of bonus material.

Season 3 saw Discovery arrive 930 years in the future after disappearing into a wormhole in the dramatic season 2 finale. Plunging straight into the action and fresh territory for the franchise, Burnham and crew find the future a very different galaxy to the one they left behind.

From the official synopsis, “After following Commander Michael Burnham into a wormhole, the U.S.S. Discovery lands in an unrecognizable world 1,000 years in the future. With Starfleet and the Federation on the brink of collapse due to a catastrophic event known as The Burn, the Discovery crew, with the help of new and mysterious allies Book (David Ajala) and Adira (Blu del Barrio), must uncover what caused The Burn and restore hope to the galaxy.”

One of the big bonuses of owning the series boxsets are the exclusive extras they come loaded with, and Season 3 is no exception! One thing CBS Home Entertainment excel at is delivering unique content, despite the huge amount of behind-the-scenes material released on social media. The extras covers all aspects of production from concept to execution. And of course, those coveted gag reels and deleted scenes.

The official release date for the DVD, Blu-Ray and Steelbook in the US and Canada is July 20th. International release information is not yet known, sadly that’s not unusual but we should hear something soon. Digital downloads via sites like Amazon Prime & iTunes should also appear at the same release date at the physical media, but again, there’s no info as-of-yet.

The Best Of Picard!