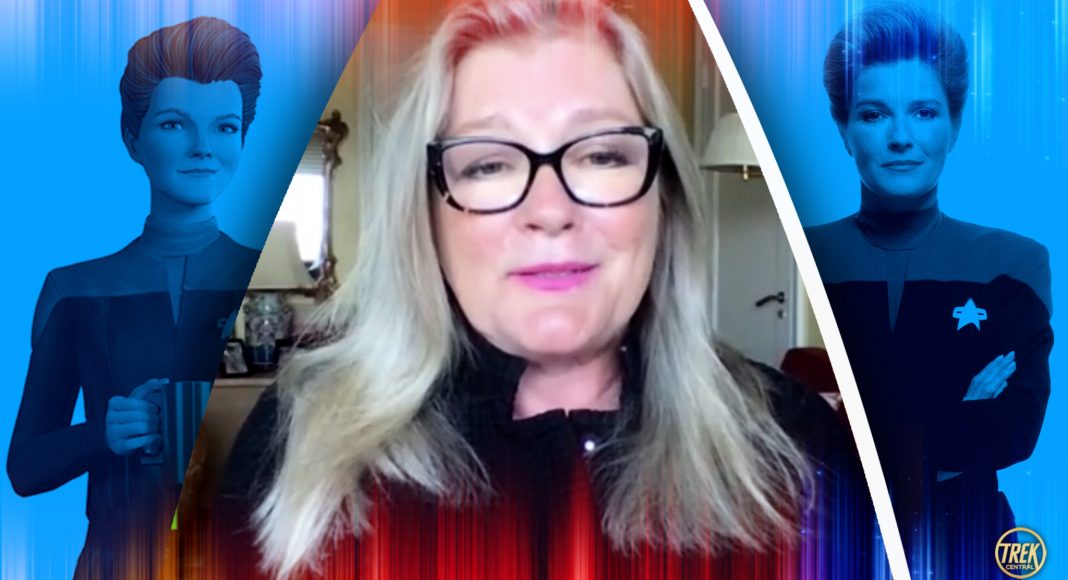 Kate Mulgrew appeared as a guest on RT’s Dennis Miller+1 podcast last night, for a career spanning interview. During the 30 minute chat the actor spoke about her current role on Mr Mercedes and revealed more insights into Captain Kathryn Janeway’s latest adventures in the upcoming Star Trek: Prodigy.

Details on Star Trek: Prodigy have been frustratingly slow to be revealed, after successfully staying top secret during the show’s development. That was until of course, the big revelation that Kate Mulgrew would return to reprise her role of Captain Janeway. Usually news is unveiled at official press events with presentations during the Paramount+ Investor’s Day event, and Star Trek’s First Contact Day.

Speaking from her home via video call, Mulgrew was not shy with details, and revealed just how we’ll be meeting a new animated version of Janeway in Star Trek: Prodigy.

“In Prodigy, five kids are incarcerated on an obscure planet, in an uncharted part of the galaxy. They escape from imprisonment to find a defunct starship buried in the sand of the planet’s surface. They go in – and of course the prison guards are after them – and can’t get it up, and the shields won’t run… and suddenly someone hits a button and boom, ‘Hello Kids, I see you’re a little bit stuck here, can I help you out?”. And it’s Captain Janeway in holographic form. So it’s really going to capture the imagination of little kids.“

The actor also revealed a bit more of what brought her back to Star Trek, and had nothing but high praise for the man currently in the franchise’s centre chair.

“It came through a phone call when I was doing Mr Mercedes from Alex Kurtzman…[…]…an incredibly smart guy, really astute. Understands the culture; understands where kids are; understands the mentality in a way I just don’t. And the only demographic that Star Trek is missing, are the young ones, are the kids.”

Today’s TV landscape is a very different one to what older fans grew up with. Content is far more segregated with kids shows, especially for younger children, kept on their own channels. Networks still produce family friendly tv but it can often be too mature for younger audiences. The latest era of Trek is very much a product of its platform, and while that’s not always a disadvantage, it does leave a certain demographic un-catered for.

That segregation is something that ViacomCBS & franchise boss Alex Kurtzman seem acutely away of. Not wanting to miss an opportunity to give younger audiences their own Star Trek, the driving force behind Prodigy is that awareness and hope of ensuring new generations of fans. A crucial initiative to carry the franchise on for its next 50 years.

Of course it all began with Gene Roddenberry, and 2021 marks the ‘Great Bird of the Galaxy’s centenary. Kate Mulgrew had a few profound thoughts on just why the story he created, has endured for more than 50 years.

“He captured the idea that we, as a species – homo sapiens – reflect nothing more or less than a ship that is lost in space. Meaning in infinite unknowableness. And what do we do when we are captured? -This is called the life span. How do we make it worthwhile? What do we exercise that lifts us above the rest? And that is ’empathy’. It is what he call – beautifully by-the-way, I use it all the time – ‘The Prime Directive’. First do no harm, approach each species – meaning each man – with the same guilelessness, and honesty, and warmth, and disaffection that you would anyone else. Never use cruelty as a strength. Use science as your guiding light. And hope as the permanent objective. And I think you can’t beat it for its value. Everybody is besotted with Star Trek.”

“As for Captain Janeway and sitting in the captain’s seat as the first female… to helm a starship? It changed my life, it utterly changed my life. Rick Berman – who was then the carrier of the franchise – told me it would. I laughed and thought, ‘oh yeah, they all say it’s going to change your life’. It changes the moment. This changed the fabric of my life, the very substance of it in fact.”

It’s been almost exactly 20 years since Star Trek: Voyager was last on the air, with the final episode broadcast on May 23rd, 2001. Mulgrew reflected back on that life-changing experience, and it’s impact.

“It was quite a chapter. 7 years in a very unique foxhole, and I made life-long friendships in that foxhole. I learned a lot of things about myself, some of them not so admirable, but most of them actually quite good. I learned how to stand up for 18 hours a day, and that excellence was of the moment and had to be exercised at every turn. I think I learned a kind of extraordinary discipline during those years. I was raising 2 little children by myself, and those days were very long, those weeks were very long. And I said to myself, ‘the only thing you could possibly do to make this right with your children, is to knock it out of the park’. And I think for young women in science, I may have done that a little bit. And that alone was gratifying enough.”

As for Captain Janeway’s newest adventure, the actor has high hopes for Prodigy and its ability to unite viewers new and old, and usher in a new generation of Star Trek fans.

“If they can sit with their mothers who watched me in live action. And their father’s who loved arguably the other guys. Then we’ve got a family affair and that will bring it full circle, and it’ll be terrific.”

Watch the full interview with Kate Mulgrew on RT’s Dennis Miller+1 show here, or you can listen to it as an audio-only podcast here.