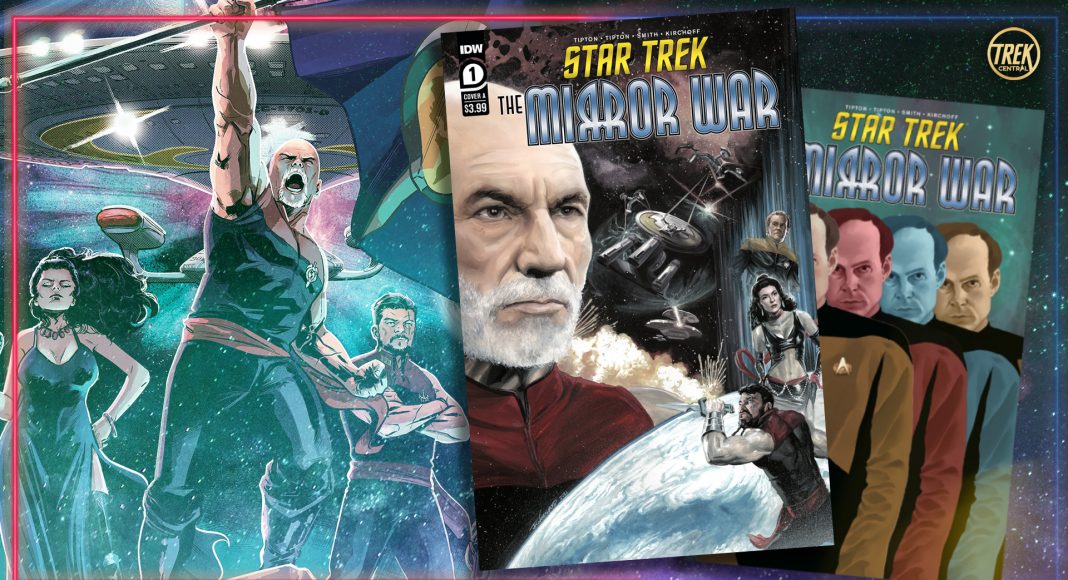 IDW’s The Mirror War kicks off with a bang in its first full issue. Following last month’s issue #0, the mirror crew of the Enterprise-D is hellbent on restoring the Terran empire to its former glory after its collapse following the enlightened views of mirror Spock. Seeking to vanquish the Klingon-Cardassian alliance, they look to the secrets of the prime universe to gain a powerful upper hand.

The issue begins with mirror Picard and Data, who is disguised as an Andorian, attending a party to gather a valuable piece of intel. Picard and Data are dressed in black Starfleet dress uniforms, an inversion of the white dress uniforms seen in the post Next Generation era. A simple change yet effective change to show their evil nature. Picard and Data end up crashing the party and stealing a data crystal off of a man named Rogers. The whole scene is reminiscent of the holodeck party scene in First Contact, when Picard loads the Dixon Hill program to take out the Borg.

One of the more interesting plots introduced in this issue is the hint that mirror Riker wants to usurp Picard as captain. It has been established through many of the previous iterations of the mirror universe that the way to rank up in the empire is through directly challenging a superior officer in combat. Throughout the issue, we see that Riker is uneasy of Picard’s leadership and constantly questions his orders. Riker, who in this universe is in a relationship with Troi, tells her that “It will be soon,” which is most likely a reference to when he will challenge Picard for the captainship. In the prime universe, Riker is the closest thing Picard has to a best friend, so to see them at odds like this is quite the contrast.

Another fun addition to this story is the inclusion of Dr. Leah Brahms as an officer on the Enterprise. But she and Geordi have a contentious relationship as Geordi is her superior officer. A complete 180 of their prime counterparts, where Geordi looks up to and practically worships Dr. Brahms. If only prime Geordi could swap places with mirror Geordi.

The finale of the issue involves a raid on a Klingon ship carrying a valuable load of dilithium. We see the crew in full battle mode, slaughtering countless Klingons and Cardassians. In the prime universe we usually see the brutality of Klingons and Cardassians against the Federation and other factions, so to see them be the victim of a brutal attack is quite the role reversal. You could almost feel bad for them since they are so helpless against the Terrans.

The issue closes out with a warning from mirror Guinan that Picard’s closest enemies maybe those around him, which is likely a reference to Riker’s plot to overthrow his captain. We have also not previously seen Guinan in The Mirror War. How her mirror counterpart differs from her prime self will be interesting to explore. She is dressed in what appears to be robes and almost looks disheveled. Perhaps she is not on the Enterprise willingly.

Overall, this was an action-packed issue that expanded the universe of the mirror universe and introduced many exciting plots that should test these characters in ways not yet seen. A fight between Picard and Riker would be quite the show.

You can pick up Issue #1 of Star Trek: The Mirror War online via IDW’s own website, or all good comic book stores.