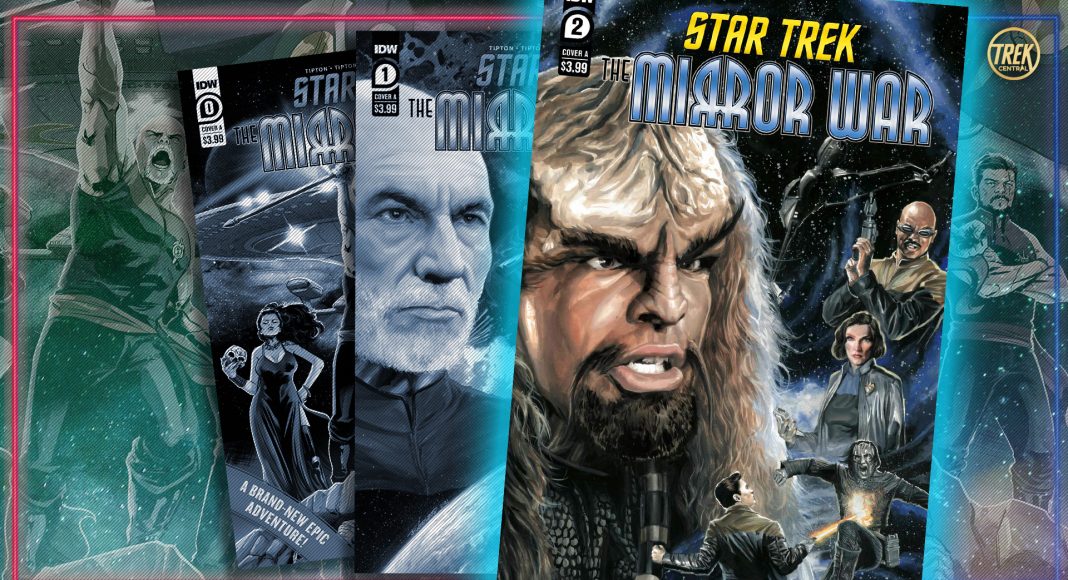 IDW’s Star Trek: The Mirror War returns with a universe-expanding second issue. Classic characters return in unexpected ways and the rifts between our recurring characters widen even further. When we last left the crew of the mirror Enterprise-D, they were on a desperate mission to reclaim the glory of the former Terran Empire by journeying to a mysterious world that holds the promise of a new and powerful fleet.

The issue begins with the crew raiding a dangerous and jungle-filled planet to recover the Captain’s personal stash of valuables. The scene is like something out of an old pirate story with a captain’s hidden buried treasure. The comparison is fitting, since our characters in this universe act more like space pirates than Starfleet officers. Barclay explains to a naive Wesley that hiding valuables on various planets is common practice for Terran captains, since they can’t trust the Empire or other Imperial officials to keep them safe.

However, Picard and the crew find that the treasure has been looted by none other than Thadian Okona, who titles himself “The Obnoxious Okona.” This is a direct reference to The Next Generation episode “The Outrageous Okona,” in which the character sought help from the Enterprise during a tense family struggle. He also made a recent appearance on an episode of Lower Decks, in which he plays a DJ at a Starfleet party.

Another long missing character who returns in this issue is Worf. Since The Terrans are at war with the Klingons, Worf is not a member of the Enterprise crew. He is instead a Regent of the flagship of the Klingon empire, and he wants revenge on Picard for stealing dilithium from the Klingons last issue. He battles the Enterprise without mercy, hell-bent on destroying the ship for good. But in the end the Enterprise makes its escape with Worf vowing to enact his wrath upon them.

And if Okona and Worf weren’t enough, mirror Benjamin Sisko, Kira, and Ro also make an unexpected appearance in this issue. The mirror universe was a big subplot in Deep Space Nine, so to see these characters in this story makes perfect sense. However, since it is learned in DS9 that the mirror Sisko was killed, this is our first time seeing him in the flesh, since this story takes place before the events of his death. Whether or not these characters will become permanent fixtures in The Mirror War remains to be seen, but if this is their only appearance, it is a fitting way to give context to these character’s role in the mirror universe.

After taking back his treasure from Okona, who was hidden on a remote asteroid belt, Picard finds a new place to store his valuables. He instructs the Enterprise to make contact with the jelly-fish like creatures only seen in the first episode of TNG, “Encounter at Farpoint.” Known only as the “space vessel lifeform,” Picard exchanges the Enterprise’s energy for the safe storage of his cargo. This is a deep cut for Star Trek fans, as these creatures were only seen once and were rather cheap and silly at the time. But to bring them back now only brings feelings of nostalgia for one of Trek’s odder creatures. It is surprising that mirror Picard would not try to kill and harvest them for their interdimensional powers.

Overall, this was an action and reference packed episode that deepened the lore of the mirror universe and introduced numerous plot threads and character conflicts that will surely lead to exciting results in the future issues ahead.

The Mirror War issue #2 is available now in print edition from your local comic book stores, online retailers, and IDW website and is also available digitally via the IDW app on smart devices.