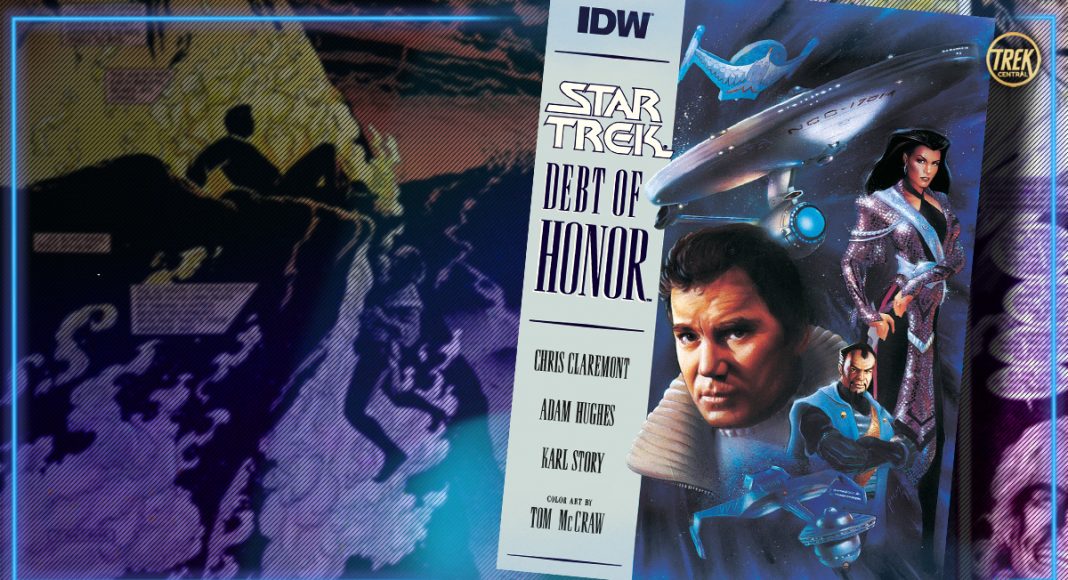 What does it mean to be expendable? Does it mean your life has no value? Or perhaps it means that your life serves a higher purpose, greater than yourself? These questions and more are grappled with in IDW’s excellent reprint of the 1992 comic Star Trek: Debt of Honor. This 96-page novel feels almost like a full-on episode of Star Trek, or perhaps even a film, illustrated beautifully and written intelligently. It is thoughtful, action-packed, and harkens back to the legacy of The Original Series crew.

Star Trek: Debt of Honor begins just after Star Trek IV: The Voyage Home. We get to see Kirk and Gillian, who are now living in the 23rd century, vacationing and monitoring the whales brought to the future. It is interesting to see Kirk and Gillian post-Voyage Home, as their lives together were never explored past that point on the screen. They are happy together, but Kirk is haunted by the destruction of the Enterprise and the death of his son in Star Trek III: The Search for Spock. But not before long, Kirk is once again whisked away on an adventure across the stars.

Throughout the novel, we see various flashbacks to different points in Kirk’s life when he encounters a mysterious and dangerous bug-like alien life form Kirk-dubs the “critters.” The first is an encounter onboard the Farragut, when Kirk was just a lieutenant, where he meets the half-Romulan half-Vulcan, T’Cel. The two narrowly escape an attack from the critters on the Farragut before T’Cel mysteriously disappears. We have rarely seen Kirk before his time as captain, so it is interesting to get this view into his past. These flashbacks throughout Kirk’s life create a thread that the whole story is based on. It allows the authors to weave a story that takes place behind the scenes through TOS and the original films.

The critters are a very unique species to the Star Trek universe. They remind the reader of something out of the Alien franchise, or even The Flood from the Halo series. Mindless, infectious drones that seek to consume and conquer all life. The Borg could also be seen as a direct inspiration. But while the Borg are a hybrid of organic life and technology, the critters are all organic. Some of the imagery in Debt of Honor borders on horror, creating a chilling visual grotesqueness to the action sequences.

Debt of Honor also introduces a whole new cast of younger officers that assist Kirk and the crew in seeking out and destroying the critters. While these new characters are unique to this comic, they are fully fleshed out and as likeable as any of the original cast. They serve to symbolize the passing of the torch from the older generation to the younger generation, as each has been inspired by Kirk and the crew we know and love.

After confronting T’Cel and the critters throughout the decades, Kirk finally decides to stop them once and for all. With a plot somewhat mirroring the The Next Generation episode, “The Chase”, Kirk gathers with a rogue group of Romulans and Klingons to stop the invasion. The three species put aside their differences and decide to work together for the sake of the galaxy, much as the Federation, Romulans, Klingons and Cardassians put aside their differences to discover the origin of life in the Alpha quadrant in “The Chase.”

Throughout the issue, we get an excellent insight into Kirk’s character. We learn how sacrificing the Enterprise and losing his son in The Search for Spock affected him long-term, more than we ever did in the movies. He feels guilty that he feels worse about losing his ship than he does his own son, which sends him into a deep depression and search for meaning. He ponders what it means to be expendable, and what someone’s life, or even a starship’s life, is worth. As captain, he has sent people to their deaths before, but these losses were different. He lost two extensions of himself, his ship and his son, and feels as if he never may be able to recover. The writing is excellent here. So good one wishes they could have seen this reflection on screen.

Debt of Honor concludes with an action packed yet heart-felt reflection on Kirk’s life and legacy, and fills in the gaps between films and adds a greater depth to an already well-explored character. Jean-Luc Picard may have been the great negotiator, but it would be unfair to say that Kirk doesn’t fill a similar role. He may be bold and brash, but he is also thoughtful, confident, and able to use his charisma to bridge the divide between cultures and species.