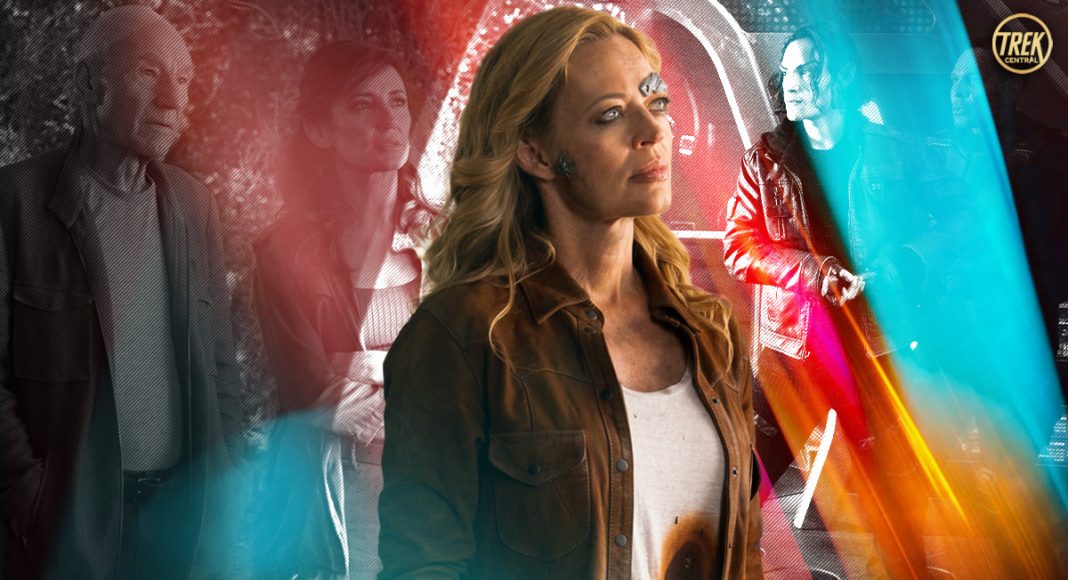 For a few weeks now, I’ve become somewhat frustrated with this season of Star Trek: Picard. Make no mistake, I don’t think that any episode is particularly bad, but there has been a lot of stalling in recent episodes. As a reviewer, I try to evaluate only what is on screen, not what I want things to be. This is challenging as a fan who is also reviewing episodes. But in past weeks I’ve felt like I’ve been saying similar things, mostly because there’s been a lot of running around Los Angeles while not much advancement of the key plot points.

Thankfully, we are finally beyond that.

“Hide and Seek” is the season’s penultimate episode, and it moves the story forward in significant ways. Let’s dive in.

The episode wastes no time concluding some longstanding plot threads. As the episode begins, we see Rios join up with the rest of the crew, and he still has Teresa and her son with him. A slew of irresponsible decisions on Rios’ part have led him here. He has recklessly put two innocent civilians who know nothing of the 25th Century mission at risk. And the risk is real. The Borg Queen and her new drones (?) are quickly invading La Sirena and the Chateau Picard property. Rios is shot and injured, though not fatally. Seeing a dire situation turning worse, Picard orders Rios to take Teresa and her son to safety using Tallin’s technology. They are transported to safety with Rios intending to return to help Picard. But Picard is having none of it, knowing that Rios’ injury would only cause him further harm.

Under more fire, the crew separates. Picard and Tallin veer off into the chateau even further, with Seven and Raffi separating off. This sets up two parallel stories for the week, and in my mind, both work rather well.

I’d credit this season for leaning into the fun of Star Trek more than the depth. But when this show wants to go deep, it will. This is certainly true for Picard. Since the early episodes of this season, the show has teased the tunnels under the chateau, and they finally come to a story fruition here. On the run from Dr. Soong, who arrives with the army at just the right time, Picard digs deep into the furthest parts of his mind. He remembers the entry to the tunnels and flees with Tallin.

In the tunnels, Picard is vividly reminded of the aspects of his childhood that he has worked so hard to repress. Until now, that has been successful, and he has been able to deflect attention from this part of his life to his duty as a Starfleet officer.

We learn more of Jean-Luc’s relationship with his mother, and much more about the tragic story of Yvette. What was hinted at a few episodes ago becomes explicit in “Hide and Seek”: Yvette Picard suffered from mental illness. Her condition worsened, and she took her own life.

Upon first viewing, this imagery was tough to watch. That didn’t change with the second viewing. And I’m not sure it should. We are forced into the deepest and most locked parts of Picard’s memory. Nothing here is supposed to be comfortable. We have gotten to know Jean-Luc Picard through nearly ten seasons of television and four films. But in some respects, this is the first time we are learning about who Picard is as a person, not just as a Starfleet officer. I’ve taken issue with how this season has structured this story. I’m still not convinced we needed this much time travel to explore this aspect of Picard. But I’m glad we are getting to know Picard in this way, and it adds richness to a character who has been with us for several decades.

With Picard and Tallin in the tunnels under the chateau, Seven and Raffi are fighting their way back to La Sirena. Last week I made a comment about how I had hoped that the bickering would turn to flourishing. We’ve seen why their relationship didn’t work, but these two clearly love each other. I want to see why they do work. And we got it! These two will always bicker, and I love it. But they are finally lifting each other up. There’s a lovely moment of resignation, too. Raffi begins to make a statement of what they will do after this mission, and Seven interjects “we’re not getting out of this.” The look that they give each other is subtle, yet powerful. Live or die, they are together in this.

The sequence onboard also involves a holo version of Elnor as a security measure that Jurati put in place to restrict the Borg Queen (more on that later). While it was nice to see the character again, this entire bit left me scratching my head. Somehow this hologram has Elenor’s memories, including up to his death? How? And why is he wearing a mobile emitter, when holograms have freely been moving around La Sirena since early in season 1? The moment he had with Raffi was nice, and seems to indicate that maybe Elnor’s death won’t be undone by fixing the timeline. We’ll see.

All the separate plot threads are finally coming together. And in this case, Seven and Raffi finally have their confrontation with the Borg Queen. And Seven is significantly injured.

Creating a Universe of Sevens

Not a week goes by where I’m not praising the Borg Queen-Jurati storyline. It is the best the season has given us. I didn’t want more Borg. I thought they were done, pretty much fully explored by the end of Voyager. I thought the idea of the Borg reclamation project in Picard’s first season was interesting, but not entirely fleshed out. When I heard a new Queen was playing a role in season two, I shrugged. What a delightful surprise all of this has turned out to be.

Jurati is all but lost to the Borg as this episode begins. But we soon learn that Jurati is still in there, clawing her way back. We saw earlier this season that she outsmarted the Queen. And she’s done it again. She successfully locked down critical aspects of La Sirena and the code is stored with holo-Elnor. All of this sets up the sequence of events that lead to Seven’s injury, and Jurati seizes the moment to make a plea: maybe the Borg don’t really need to be the Borg.

Jurati’s case is this: the Borg always conquer…almost. They’re always defeated one way or another. They’ll take millions of lives, but in the end, they lose. Jurati makes the case that maybe the Borg don’t need to assimilate. Instead, they can have salvation and make peace with others. Jurati points out that Seven is the best of both worlds; She’s perfectly made as a human who is part Borg. The Queen side of this fight isn’t quite convinced, but she’s smitten enough by Jurati’s ability to offer a trade and give this a shot. She’ll save Seven, but she needs to take La Sirena.

The saving of Seven brings back her Borg implants. It’s weird. They’re exactly as they were before all the timeline changing shenanigans began. It’s a bit baffling, because if they save the timeline, her implants would be back by virtue of the mission’s success. I’m not going to try and explain it, because it doesn’t make much sense. But what is more important here is the lovely tribute to Seven of Nine’s journey. We learn a little more of her life after Voyager returned from the Delta Quadrant. She tried and failed to join Starfleet. As it turns out, Starfleet would not take her because of her extensive time as a Borg drone. Given what we know of Starfleet’s more inward and fearful stance during this time period (as shown in Picard season 1), I think this makes sense.

Yet “Hide and Seek” goes out of its way to show what makes Seven unique, and why she’s a beloved character. As Seven has wrestled with her identity this season, I keep thinking “but we love you as you are”. Here, she seems to finally accept it. It’s a fitting conclusion to a character journey that was setup in the latter seasons of Voyager. Seven was a little apprehensive about retiring to the Alpha Quadrant with Voyager. She wasn’t sure she would be accepted. And it turns out those fears were justified. But here we see that it’s clearly Starfleet’s loss. Seven being part Borg is a blessing, not a defect.

With the La Sirena crew reunited, they see their ship take off under the command of a seemingly friendly Borg Queen. There is still work to be done. Soong is still trying to interfere with the Europa Mission. That must still be successful. But the Queen has a message for Picard: there must be two Renees, and one must die. I’m not quite sure where this is leading, but I think we are seeing the end of the Jurati character. As many have predicted, she is likely the Queen from the season premiere, and I think this will be the wrap for her character. And while Rios seemingly changed his mind about staying in 2024 Los Angeles, I ultimately think he will remain. With one episode left, we’re soon to find out.

And now, we wait for the final confrontation of Picard and Q. One more to go. Make it so.