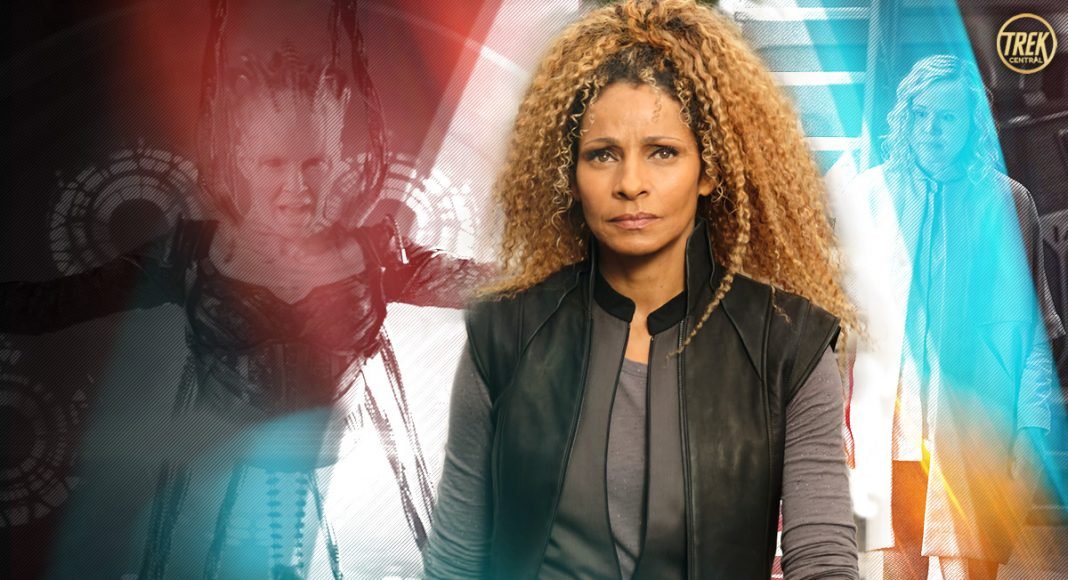 This week’s new episode of Star Trek: Picard is ‘Assimilation’. Written by Kiley Rossetter & Christopher Monfette, and directed by Lea Thompson (of Back to the Future fame).

SPOILER WARNING – As usual, if you’ve not seen the episode then be aware, there are lots of spoilers ahead!

This season of Picard doesn’t miss a beat, does it? Whereas much of the first season seemed to meander around, the first three episodes of season two contain a focused vision. Every event matters, and thus the cliffhanger between “Penance” and “Assimilation” has a transition of only a few seconds. We pick up exactly where we left off last week, with Picard and the crew of the La Sirena held at phaser point by the Confederate soldiers. Our heroes have no choice but to relinquish their weapons, and despite a last-ditch effort of Oscar-caliber acting by Seven of Nine, they are found to be imposters.

Not all is lost, though. Agnes is the sole crew member not in sight, and she unleashes the Borg Queen to assist in their escape. In a matter of moments, the La Sirena intruders and the Confederation starships are destroyed. La Sirena soon is warping around the sun, and back in 2024. And with that, this season’s story is in full force.

A Matter of Life and Death

The action in “Assimilation” also leads directly to the fate of Elnor. The phaser blast he took turns out to be fatal. A frantic few minutes take place, where La Sirena systems are failing and there is limited power during the escape and warp around the sun. With the ship’s power fading fast, quick decisions are made. And unfortunately, it is a choice of who lives, Elnor or the Borg Queen. Objections are voiced loudly as Picard, the ranking officer, orders that the Borg Queen live.

Picard has been here many times before. He knows the stakes and realizes that the needs of the many outweigh the needs of the few. The Queen must live, as she is the sole source that can help them identify who the Watcher is, and also how to repair the past. Picard has known Elnor since he was a child, but the damning choice is clear: the ship’s limited resources must save the Borg Queen. The future depends on this choice.

I couldn’t help but notice that the Captain Picard of old is present in these scenes. He knows what course of action must be taken, regardless of his personal preferences. There’s a mission at hand and far more than one life is at stake. He compartmentalizes his emotions for the mission as he so often has in his storied career. Needless to say that not everyone agrees with Picard. Raffi blames Picard for Elnor’s death. She question’s Picard’s leadership, and insinuates that he is collaborating with Q in a “game” that results in other people’s lives. Knowing her pain, Picard takes most of these accusations without rebuttal, but vocalizes that he and Q do not operate on the same moral compass.

There’s a bit I found unsettling in this scene though. With emotions running high, it appeared that Seven and Raffi (and to a lesser extent, Rios) were too quick to argue that the Queen should die in order to save Elnor. Perhaps I misread the scene, but there seemed to be an eagerness to have the Queen die. The devotion to Elnor is obvious and the fear of the Queen is justified, but there was something about how the attitude towards the Queen’s death that seemed strikingly off about how our heroes approached this situation.

On the positive front, I’m proud of Picard and Raffi. With Picard, I’m grateful that he has found himself again after appearing lost during much of the first season. He’s not oblivious to the pain and loss around him. But just like he was on the Enterprise when someone under his command died, his focus remained stable and his resolve unshaken. He is being the foundation that those around him need. And for Raffi, I’m proud that she focused her hurt on productive means rather than a destructive one. Raffi became a mother figure to Elnor, and his death rattled her. She needed someone to blame, and Q is too abstract to attack in the moment. So she goes after Picard. But only for a moment. Deep down, I think Raffi knows Picard is right, and thus advances the mission to find the Watcher.

The big question here: Can Elnor be saved while repairing the past? Only time will tell, but if I’m a betting man, we haven’t seen the last of Elnor.

Dr. Jurati is the star of this episode. Knowing options are limited, she offers a plan that Picard objects to from the moment it is suggested: Jurati wants to restart the Queen back to function via an interface with herself, and do so before she’s assimilated. Finally realizing that there are no other viable option, Picard agrees. Stewart, Pill, and Wersching are all at the top of their game, resulting in a captivating set of scenes that advance the story of needing the Borg Queen for this mission, providing much-needed and long-awaited depth for Jurati, and providing us with a slowed down assimilation process that outlines just how the Borg infiltrate the minds of those being assimilated. Jurati and Picard offer a play-by-play of assimilation, and it provided fascinating world-building of the Borg.

With the Queen back online, she angles Picard for a deal: She’ll trade information on the Watcher in exchange for the ship. But Dr. Jurati was one step ahead during all of this, and managed to steal, at least partially, the needed information. You could see the glee on Jurati’s face when her plan worked and she outsmarted the Queen. It was like her version of Worf’s Borg-killing line in First Contact: a smirky “assimilate this”.

This is the Dr. Jurati I’ve been waiting for. I was drawn to this character when she was introduced in Picard’s pilot, but soured based on the choices the season one storytellers made for this character in the latter half of the first season. Jurati has returned to form: a brilliant, quirky, and surprisingly brave character that offers great insight to this crew. I hope we get much more of this.

Picard has also reinvigorated the Borg. I thought the Borg story was over and done. Voyager teetered to the point of the Borg being overused, and with that the Borg lost the scary edge that they once had. But Terry Matalas and his team have found uncharted and interesting angles to explore. And once again I find the Borg to a terrifying looming threat.

Back to the Not-So-Distant Future

With Picard and Jurati assigned to the La Sirena, Seven, Raffi, and Rio beam down to 2024 Los Angeles in search of the mysterious Watcher. With the ship’s power limited, beaming is inexact. They are separated from one another, and Rios has…a rough landing. The nods to Star Trek IV: The Voyage Home are present in this episode, and likely will be for the next few. In this case, Rios takes Chekov’s role and finds himself in a hospital. Alone and unable to communicate with his shipmates, Rios must navigate concealing his identity, obtain his combadge, and not disrupt the timeline. He comes remarkably close to doing this, but the clinic he is treated at is targeted by immigration police and he and his doctor are apprehended. The Rios sequence worked well, providing humor to balance the heaviness of the La Sirena sequences.

Seven and Raffi make for a great pair. You can see why these two are attracted to each other, but you can likewise understand just why the relationship didn’t work. It’s a joy to watch these two together, and the out-of-time angle allows them to display a humorous side that is not often present. Like in “Penance”, we get to see some of the Seven of old come out. Here, we get her trying to convince a security guard that they are on the roof of a skyscraper to take a selfie, but she is using too technical and someone inaccurate wording to describe the situation. It reminded me of her early days on Voyager when she was trying to figure out how to communicate and be a part of the crew.

Q is used sparingly in this episode, but his impact hovers over many of the events. I suspect that will be the case for much of this season. The writing team has struck a good balance: insert Q at precise moments to inform and push Picard, but let him remain in the background most of the time. The character of Q works best as a force of nature rather than a visible presence and leaning into that element of the character is making for a successful season.

“Assimilation” concludes the three-episode introduction to this season. While I found the first two episodes to be stronger and more captivating, “Assimilation” still offers a compelling story that has set up a series of interesting challenges for different sets of characters. These first three episodes set an extremely high bar for the remainder of the season. The crew is now firmly in the 21st Century for the foreseeable future. I’m curious to see if the middle of this season lives up to what has been established thus far.

Not nearly as many nods and easter eggs this week, but here’s a few things I noticed: