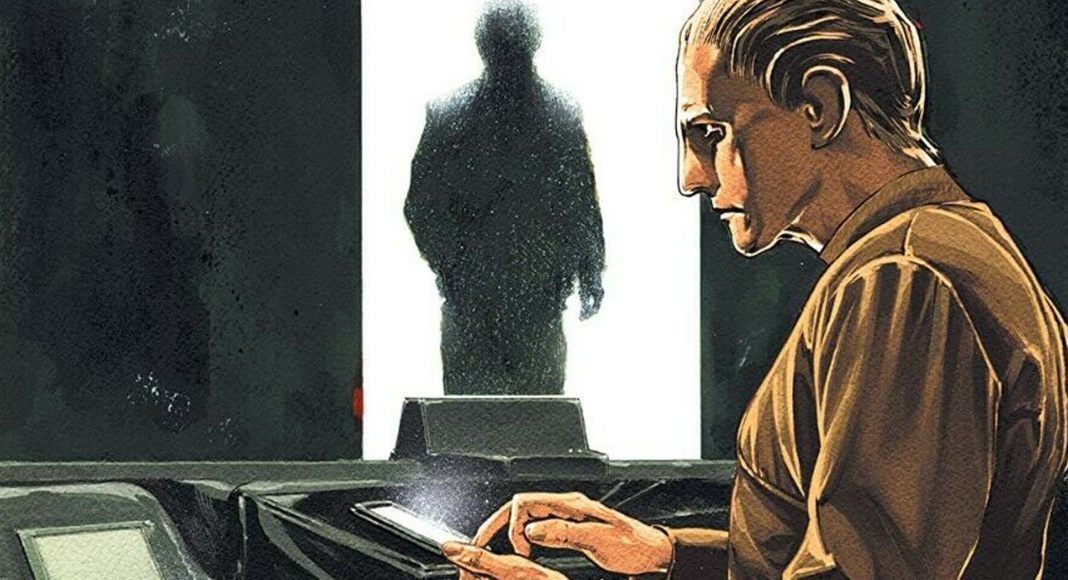 Our resident Deep Space Nine expert Vedran takes a look at the recently released ‘Too Long a Sacrifice’ graphic novel from IDW Publishing.

Deep Space Nine is a captivating setting for a good Star Trek mystery. The space station at the edge of the Federation filled with dark secrets, Deep Space Nine is a perfect place for an intriguing and suspenseful tale. And this is exactly the type of story that we got in the latest IDW Trek comic: ‘Star Trek: Deep Space Nine – Too Long A Sacrifice’.

‘Too Long A Sacrifice’ is a fascinating noir story penned by two Star Trek veterans, Scott and David Tipton, known for one of the best Trek comics in recent memory: ‘Mirror Broken’. They are joined by the artist Greg Scott who brings our beloved characters to life in a way rarely seen in Trek comics. The noir style is an excellent setting for the story set in the midst of the Dominion War. It all starts innocently enough, in a true DS9 fashion, with Garak and Bashir having a friendly talk during a lunch at the Bajoran café. It does not take long, however, for the story to take a dark turn.

The peace is shattered by an explosion that leaves the place in shambles and our iconic duo shaken, yet, alive. From here on, the story picks up pace. While the familiar DS9 crew does play a minor role in solving the mystery, the main sleuth is Constable Odo, who is tasked with finding the culprit. This choice is not accidental. After all, who else knows the station so well, every nook and cranny, not only in its present but also in its past? Little does Odo know that the explosion is only the beginning of a series of strange murders, which could endanger not only the people at the station but the very course of the war.

The graphic novel contains all four issues of the mini-series with the plot unfolding in a traditional ‘whodunnit’ way. It is a grounded story, full of twists and turns, and it is a pleasure to follow Odo as he is racing against the clock to solve the mystery. One could almost feel his iconic voice in the pictures since Odo often communicates using grunts and short expressions that are well captured by the artist. His investigation leads the detective first to Quark (surprised?) only to get more complicated as crime barons are calling for revenge and justice, as murders continue. When the mysterious assassin targets the people vital for the war effort, the Federation step in, sending Retlaw, a special investigator whose task is to assist Odo.

Retlaw is a welcome addition to the story. Not only is he a Betazed, which offers an opportunity for some interesting scenes involving telepathy. Retlaw also acts as an obstacle for Odo, and brings in an element of conflict, which heightens the dynamics between the characters and further develops the story. Gradually, both detectives learn to cooperate, while the mystery becomes political, involving high-placed Bajorans and long-forgotten secrets. In the end, the revelation is a bit anticlimactic, but it fits into the overall story arc, and into the lore of the Deep Space Nine.

‘Too Long a Sacrifice’ is a great example of a good Trek story. The noir murder mystery feels like a discarded episode brought to the small screen. It could work flawlessly within the Dominion War setting had it been filmed. The characters are addressed with due respect. They feel like they belong in this story. Art adds a dramatic flair. There are some issues with the similarity of certain characters, but most heroes do resemble their prototypes and can be easily recognized. Even their mannerisms are presented faithfully, especially in the case of Odo, who shapeshifts in some scenes.

A good story requires more than the plot and characters. It needs a setting. Thus, the iconic space station appears superbly drawn in the comic. The grim design and the shadow-filled corridors heighten the noir feel, while the intricate worldbuilding enhances the gloomy ambient. For the first time in Trek history, we get to see the fall of Betazed. This tragic event from the Dominion war was only briefly mentioned in the Deep Space Nine, but never explained until now.

While IDW got the Star Trek license, Deep Space Nine and her crew of heroes and misfits received due attention from the authors. This careful treatment of the familiar characters is another reason why I am so satisfied with the success that is ‘Too Long a Sacrifice’. Not only did we finally get a story fully set in my favourite TV show, but the story itself turned out to be good. Brought to life by some of the best writers in the genre and illustrated by a noir style master ‘Too Long a Sacrifice’ is a tale worth the wait. Since the main protagonist is none other than Odo, played by the late Rene Auberjoinis, reading this comic transforms into a powerful and poignant experience. A fitting tribute to both the beloved actor and the Deep Space Nine, as well as to their fans.

‘Star Trek: Deep Space Nine – Too Long a Sacrifice’ is out now.

Did you enjoy ‘Too Long a Sacrifice’? Do you agree with Vedran? Let us know via our social media platforms.