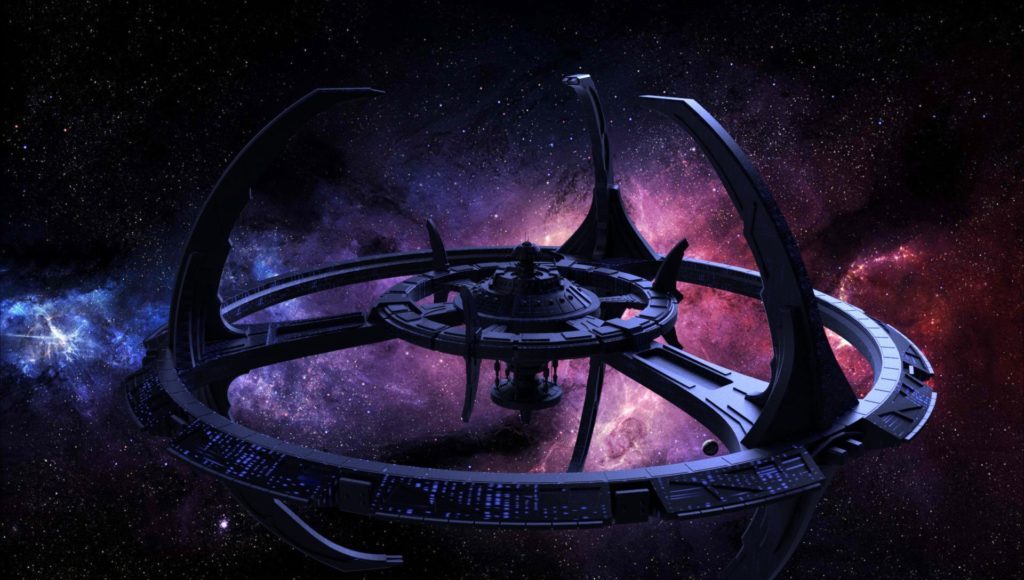 Deep Space Nine – The Darker Side of Utopia

Deep Space Nine represented a perceived change in direction for the Star Trek franchise but did it end up being closer to Gene Roddenberry’s vision than any Star Trek that came before?

From its inception, Star Trek followed Gene Roddenberry’s vision. The vision of a bright future, where humanity was able to overcome its differences, where wars are a thing of the past, and money is rendered obsolete. In short, Roddenberry’s vision was a utopia. For decades, the advanced starships carried the best and brightest across the vastness of space, spreading high ideals and values, and bringing peace and enlightenment to those with whom they encountered. True, there were moments when our heroes’ beliefs and morals were questioned, but those moments were brief and soon forgotten. With the problem resolved, the starship would move onwards, carrying the crew to a new planet, to meet the new aliens and new challenges.

Then in January 1993, something changed. The arrival of Deep Space Nine introduced us to a different sort of a captain (then still commander) Benjamin Sisko. Instead of the state-of-art flagship, his home was an obsolete space-station, located at the very fringes of Federation space. Instead of exploration, Sisko’s primary task was to prepare the recently oppressed, war-torn planet Bajor, for induction into the Federation’s utopia. This unique, not yet seen situation was the ideal setting to question everything Trek represented. To ask, what happens at the fringes of that utopia? What happens when the doubts and problems our heroes face do not go away? When the very existence of the Federation is in peril, and the only way to survive is to turn towards the very thing it despises. Subterfuge and violence?

For seven seasons, the writers of Deep Space Nine handled all facets of this darker side of utopia. No topic was taboo anymore. From the issue of corruption and greed, spirituality, and religious extremism, to the difficult questions of war crimes and genocide; Deep Space Nine was changing our perception of Trek in front of our very eyes. The dichotomy of good and evil was pushed aside, replaced by the shade (or several shades) of grey. There were no easy solutions. The sacrifices had to be made. No one was untouchable, and characters could (and would be) killed. But this was never done for cheap shock value. Each loss was a lesson, and each trauma would make our heroes stronger.

The heroes were also different. Deep Space Nine’s stationary setting allowed the writers to introduce a large cast of recurring characters, besides the main cast. Most of them were not part of the Federation, nor did they want to be. This offered a unique and fresh perspective. In the past, the utopia was always taken for granted. But what if someone did not want to join? Was there a value of neutrality, of charting one’s own path? From this point of view, even the antagonist’s motives and actions could be understood (but not justified). And although there were plenty of memorable antagonists, the most memorable moments were those when the captain and the crew fought against their personal demons. It was then that we could see not only the full extent of the effort they made to preserve their ideals and principles but also the value of friendship. Through seven seasons, we have been witnesses to some of the most amazing and believable friendships seen in Trek, of which many started as rivalries or accidental meetups.

And then there were the difficult topics Deep Space Nine covered. The issue of our unresolved past seen in “Past Tense”, the darker side of utopia in “The Maquis”, the shared war guilt in “Duet”, the racism in “Far Beyond the Stars”, or the exploration of how far one would go to save the others in “In the Pale Moonlight”. The blurring of the lines between good and evil increased greatly in the second half of the shows seven-season run, during the long and brutal Dominion war. The creative team did not cut the corners. The Dominion war brought with it the biggest peril the Federation ever encountered. An enemy with who was impossible to negotiate, and who often, pushed the Federation on the defensive. The station was lost, then regained, and our heroes were pushed to the breaking point. Some of the episodes reminded us more of a war movie than the classic Trek. When Section 31 was introduced, it became obvious, that the Federation itself also had a darker side, and that in such a way, it is not so much different than the Dominion.

One could assume (as many fans actually did then) that Deep Space Nine was a dark show, presenting a dystopia, and go so far as to be anti-Roddenberry. But that person would be wrong. Yes, Deep Space Nine was different, and as we have seen, it did bring some radical differences into our comfort zone. It gave us a flawed world, and flawed heroes, who sometimes behaved the same as the antagonist. It gave us a confusing world, something that looked very un-Trek. At the first glance. But Deep Space Nine was also a show about hope, showing that the utopia cannot be taken for granted. Yes, the world was flawed, but it was worth fighting for. The characters made difficult, often questionable choices, but in that they just confirmed their humanity. It made them relatable, and their story more important. Through Deep Space Nine, from intra-personal relationships to political alliances on the grand scale, we learned the value of compromise. The idea of a utopia that may be great for some, but not for everyone else. Perfection is impossible, and some differences should be preserved.

Despite being a “black sheep” when it aired (and it is even perceived in that way by some of the Trekkies), Deep Space Nine was perhaps the closest to the Roddenberry vision of all its counterparts. Instead of aiming for complacency of utopia, we should embrace diversity, and broaden our perspectives. Only then, we can try to build a better world. This is perhaps, the most important lesson Deep Space Nine gave us. And this is the lesson, which hopefully, Discovery will follow, while charting its own path, in the world which is in desperate need of their Federation.