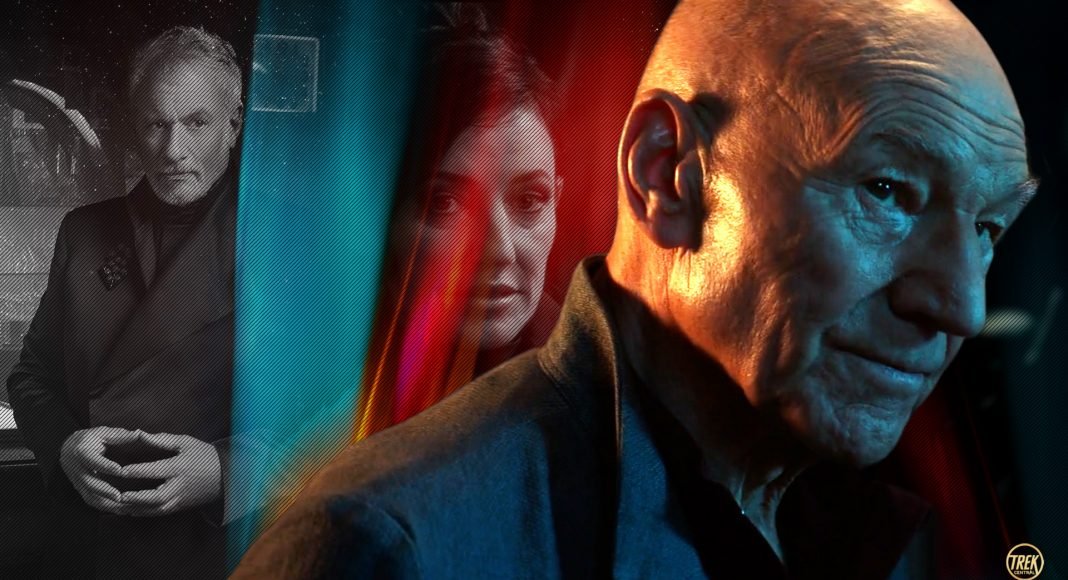 Picard’s Destiny – The Key to the Future?

Star Trek: Picard’s new episode ‘Watcher‘ had a scene-stealing cameo from a punk on a bus. And dropped some pretty big reveals with [SPOILER] and [SPOILER] turning up in the past. Fans would have immediately spotted these characters, along with Q in the episode’s closing scene. But it’s a more subtle appearance that may be pivotal to this season’s mission. Let’s take a look at Picard’s Destiny in the Star Trek: Universe.

This article contains discussion of new and upcoming episodes.
So if you don’t want to be spoiled, please stop reading!

Picard’s words in the premiere episode ‘The Star Gazer‘ are beginning to reveal themselves as more than just another great speech. As the season progresses, it seems the words may have carried surprisingly revelatory weight, and laid out the threads and themes of the story ahead.

From the Picard gang’s mission to restore the timeline. To the reveal of a tragedy in Picard’s own past holding the Admiral back from a very personal final frontier.

“A great-great cousin, Renée Picard was instrumental in early exploration of the solar system.”

If you were paying attention to the talk of ancestors, then the final scene of Star Trek: Picard‘s latest episode ‘Watcher‘ may have made lights ping on. And the promo for this week’s episode 5 ‘Fly Me to the Moon‘, is more revealing. But who is Renée Picard, and what is her significance to season 2’s story?

Actress Penelope Mitchell plays Renée Picard, the “great-great cousin” of Jean-Luc Picard, who helped pioneer early exploration of the solar system. Now we know why the Europa Mission keeps popping up, Picard’s ancestor was part of it.

And it’s not only about space exploration but the future of cybernetics.

Behind Renée is Jackson Roykirk Plaza, apparently headquarters for the Europa Mission and an easter egg goes all the way back to Star Trek: The Original Series. It’s a reference to Dr. Jackson Roykirk, a pioneering Cyberneticist of the 21st century. Roykirk created and launched an intelligent prototype probe known as ‘Nomad’, seen in TOS season 2’s ‘The Changeling’. It’s another piece or layer of the puzzle coming into focus. Hopefully the next episode will reveal more details, including who Brent Spiner and Isa Briones’ 21st century characters are.

Did you catch both Dixon Hill easter eggs? It’s a really neat way of subtly connecting the two Picards. The first at the start of the episode where Jurati calls Picard a ‘regular Dixon Hill’ (the character he loved to play on the holodeck). And at the end of the episode, where Renee is reading a Dixon Hill novel. A love of fictional detectives clearly runs in the family.

We now know from ‘Watcher’ that the event which will irreparably change the future is in just 3 days’ time. April 15, 2024, to be precise.

From next week’s promo, we learn that the Watcher’s task is to preserve the destiny of certain individuals. That individual in the 21st century is Renée Picard. This Picard’s destiny and the Europa Mission are integral parts of the puzzle.

It seems logical to conclude that the event Picard must ensure happens, is a successful Europa mission.

If you’ve also been paying attention to Amazon’s socials, you’ll have noted they keep making references to ‘Picard’s Destiny’. A little odd, so it caught our eye.

But back during early production on Star Trek: Picard season 1, industry listings noted the show’s codename and alongside it Star Trek: Destiny. It would eventually be changed to Picard instead, but you have to wonder why the change? Besides the obvious tediously, and constantly maligned acronym…

Many fans thought the name ‘Destiny’ would refer to the book series of the same name. Star Trek: Destiny is a novel trilogy written by David Mack. The books take place after the events of Nemesis and follow our many hero characters. Including linking Star Trek: Enterprise to the TNG era.

And the destiny references don’t end there.

Picard originally believed that Guinan was the Watcher, but that was quickly dismissed. She knows of them though, and when Guinan takes Picard to meet one she reveals some interesting details.

GUINAN – You’re looking for a supervisor, otherwise known as a ‘Watcher’. They’re peppered through the galaxy assigned to protect the destiny of certain individuals.

PICARD – Assigned by who, and what do you mean about destiny?

Thems some major Doctor Who vibes…

Another really great deep cut easter egg – we’ve met a ‘Watcher’ or ‘Supervisor’ before. In The Original Series season 2 closer Assignment: Earth, Gary 7 describes himself as a ‘Supervisor’ assigned to earth to prevent mankind destroying itself.

Between Supervisor Laris’ mission, Q’s attire and behaviour toward the new Picard, Renee’s location, and other visual clues… I don’t think it’s too much of a stretch to say this is a ‘fixed point in time’ that if changed, fubars the future.

Q seems quite determined to ensure the change happens, beyond his usual meddling. There’s a malignance to the words he mutters while watching Renée. Is this the Q we knew? The frustrating trickster and teacher of harsh, but ultimately useful lessons? Or a different Q? The failure of Q’s powers certainly add an extra dimension to the game being played.

PICARD: Yet I choose to leave you with the words of my mother, who was no explorer at all. When I was a boy she would point to the night sky and say, ‘Look up Jean-Luc, and let’s see what’s out there’.

In the final moments of the episode Q is reading a newspaper containing yet another visual clue. A headline that reads, ‘Will 2024 revive space exploration?’ If you’ve been paying attention to the recent decades of real world space exploration, you’ll know that the halcyon days of the 60s, when Star Trek was conceived, are long gone. We haven’t been back to the moon since the 70s, space exploration is in the hands of billionaires, and those dreams of ‘today’ envisioned decades ago are a long way from reality.

And worst of all, it seems like humanity has forgotten how to “Look Up”. Instead we’ve looked inward, and bicker amongst ourselves. We create borders, ‘other’ those who are different, and are once again seeing a rise in nationalism. It’s a disturbing trend in the politics of today, and if Star Trek is anything, it’s political. And not just passively, it aims to tell stories which are rooted in the today, often presciently so.

We often refer to space as the final frontier. But, the older I get, the more I come to believe that the true final frontier is time. In Command, as in life, what we do in crisis often weighs upon us less heavily, then what we wish we had done. What could have been.

For Renée Picard, the very future descendant Jean-Luc is fighting to restore, could hang on her voyage into space. If Renée is not present or able to make the Europa Mission successful, then the future will be lost.

But for Picard, it feels like we’re being led toward a much more personal frontier. One that will lead him on the most terrifying journey of discovery.

Time offers many opportunities but it rarely offers second chances…

While obviously the themes of the season are based around time travel, it’s not the only type of ‘time’ wrapped up in this story. There is a personal tragedy for Picard’s Destiny holding him back. A mystery from his past involving his mother has meant a lifelong fear of exploring his own heart.

And our use of time in the literal sense, realizing how quickly it slips away. And how precious it is to have enough for second chances.

⭐ – Everything We Know About Star Trek: Discovery Season 5