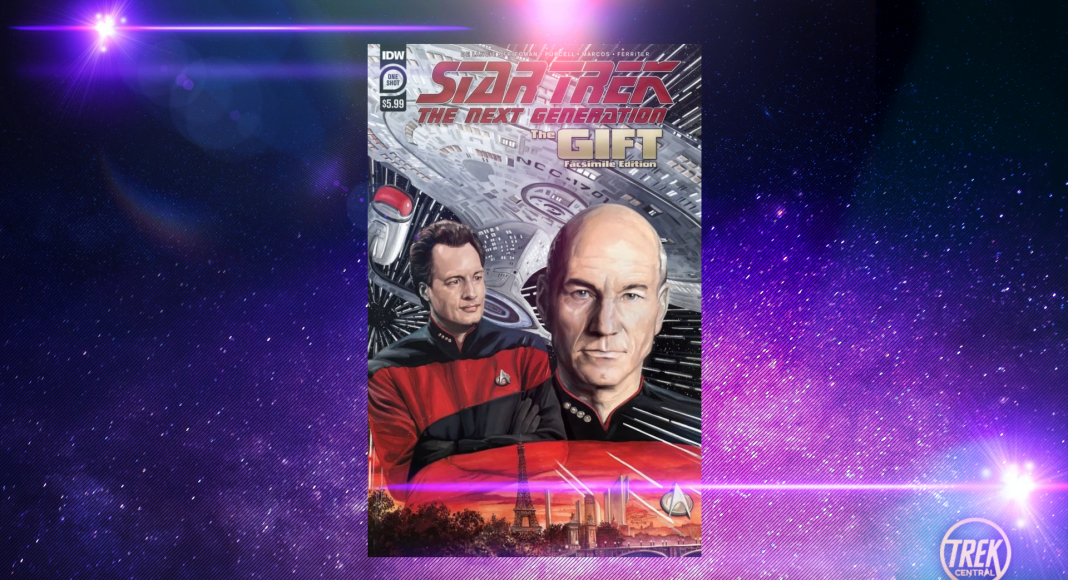 Comic Review: Star Trek: The Next Generation ‘The Gift’

With the announcement of the return of Q to the Star Trek universe in Star Trek: Picard, it is only fitting that IDW should republish a Q-centric story in the form of Star Trek The Next Generation: ‘The Gift’.

An all-new reprint of the classic TNG story! Q gives Jean-Luc Picard the chance to go back in time to fix one of his biggest mistakes, but the consequences of his actions will create a ripple effect that will threaten the entire Federation! Written by Q himself – actor John de Lancie – with art by Gordon Purcell and a newly painted cover by J.K. Woodward.

The Gift’ which was originally published in 1990, has received a breath of fresh air in 2021. John de Lancie, who of course plays Q, wrote this comic along with Michael Jan Friedman. It is a rare opportunity for an actor to write an official story for their own character.

Since this was first published in 1990, the art style is drastically different from the comics of today. The artists use bright, bold colors and mostly flat lighting to capture their subjects. They also forgo realism and aim for a more stylized approach when drawing the characters. This style was extremely prominent in this era of comics, but has since diversified over the decades into the conglomerate of styles we have now.

The story, which was released between the third and fourth seasons of the show, is a sort of mish-mash between “Yesterday’s Enterprise”, and “Tapestry,” the latter of which was not yet released when this comic first released. The story comes on the heels of “Deja Q,” in which Q seeks refuge on the Enterprise after he was banished from the Q Continuum. The Gift kicks off with Q returning to the Enterprise to punish Picard for embarrassing him in front of the Continuum during the events of “Deja Q.” This seems to be a strange motivation for Q as he seemed nothing but grateful to Picard at the end of that episode.

Q then transports Picard back in time to Paris to confront his parents. This is interesting because it is the first time we see Picard’s home before it is fully fleshed out in the season four episode “Family.” “Family” changes many of the details of Picard’s home life from how it is portrayed in The Gift, but the inconsistent storytelling can just be attributed to the lack of information on Picard’s backstory at the time.

When Picard shows up at his childhood home, he sees a much younger version of himself along with his parents. Picard pleads with his parents to try to convince them who he is, but they think he is nothing more than a mad man. Picard then punches his younger self in the face, accusing him of being an imposter, and the man is revealed to be a replica of younger Picard created by Q. Q tortures Picard by ripping apart his DNA, and Picard begs Q to stop, pleading for a chance to fight back. Q takes up the offer and allows Picard to prove himself by convincing his parents that he is their real son.

We then see Picard and his fake younger self trade stories of their youth to try and convince their parents of who the real Picard is. Picard eventually wins out when the younger version reveals the traumatising story of Picard’s younger brother Claude’s death. Claude was just a child, and his accident was indirectly caused by Picard. This greatly upsets Picard’s parents who disavow the younger Picard for making them relive this horrible event. This obviously contradicts what we learn about Picard’s brother Robert in “Family,” but it is interesting to see what de Lancie and Friedman created for Picard before that episode aired.

Having beaten Q’s game, Q offers Picard a gift: the chance to bring his brother back from the dead. Having just seen his parents grieve over his death, Picard reluctantly says yes. We then see the Enterprise’s crew change rapidly from their Starfleet uniforms to civilian clothes. The change is as sudden as it was in “Yesterday’s Enterprise.” Obviously bringing back Claude altered the timeline in some way.

We then see the crew go face to face with a fleet of other Galaxy-class starships, led by none other than a much older Claude Picard. Much like “Yesterday’s Enterprise,” Picard quickly finds out that changing one small event can lead to galaxy-wide consequences. Claude Picard has turned Starfleet into a warmongering conquering army that seeks to subjugate any non-human species, much like humanity does in the mirror universe. Without much hesitation, Claude destroys the Enterprise and everyone onboard.

Picard is obviously furious at Q for this new reality he has created. This is where we also see elements of “Tapestry,” in which Q allows Picard to go back and prevent himself from being stabbed in the heart. Here, Q allows Picard to make a decision that seems good at first but ends up having dire consequences for Picard’s life. Q then shows Picard all the events in Claude’s life that led to him becoming a horrible dictator and the roots of his malevolence that were present even from childhood.

Unable to convince his brother to end his reign of terror, Q gives Picard a choice: let his brother die as a child to prevent this new reality, or let him live and let the galaxy suffer. Picard ultimately chooses to let him die and is whisked back aboard the Enterprise just before Q showed up.

In the final moments of the story, Q reveals that freeing Picard of the guilt he feels for his brother’s death was the gift all along, which has to be the most Q way of gift-giving imaginable. Perhaps Q never actually wanted revenge on Picard as he claimed, but this entire event was just his way of saying thank you for the events of “Deja Q.” Q teaches Picard a similar lesson that he teaches him in “Tapestry,” that the events of our lives make us who we are, and that we must accept all aspects of our past, good or bad.

The Gift provides a thoughtful entry to Picard and Q’s story that expands and deepens their complex relationship. It provides a real moral dilemma that is hard to grapple with, even as a reader. We all may wish we could go back and change our pasts, but rarely take into consideration the consequences of those actions. With hints of time travel in Picard Season 2, perhaps Picard and Q will face similar situations as they do in The Gift. Will Picard learn his lesson, or will he fall into the same trap and try to rewrite his own history?

Star Trek: The Next Generation ‘The Gift’ is available to pre-order now, release date is April 14th. https://www.comixology.com.

Written by John de Lancie with art by Gordon Purcell and cover by J.K. Woodward.