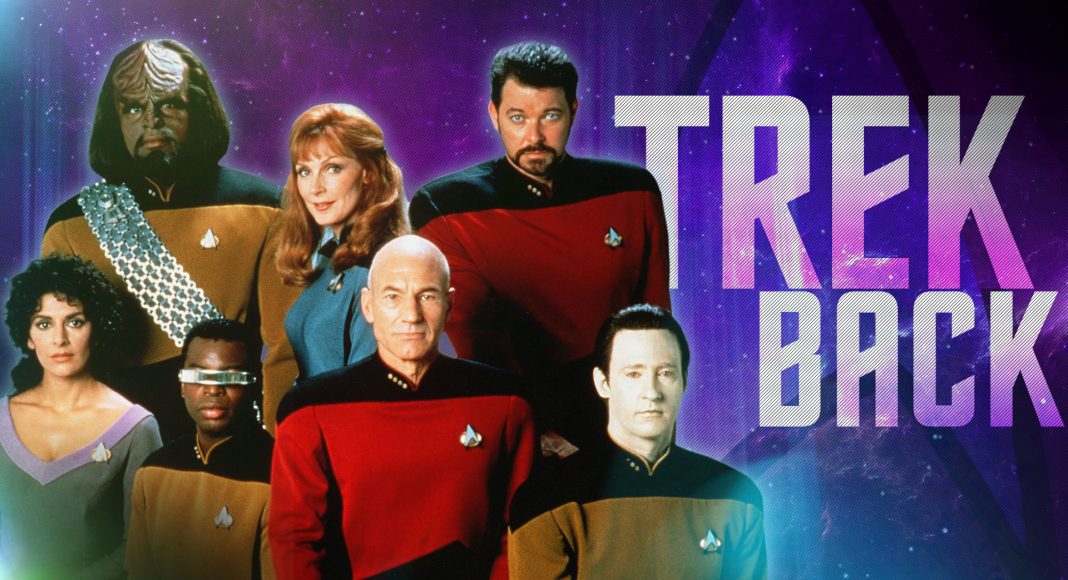 Often cited in many episode polls as one of the finest of The Next Generation era, ‘Tapestry’ fills some of Jean Luc Picard’s back story focusing in on an incident in his youth that has ramifications on his later life. We take a Trek Back at this classic episode.

“There are many parts of my youth that I’m not proud of… there were loose threads… untidy parts of me that I would like to remove. But when I pulled on one of those threads… it unravelled the tapestry of my life.” – Jean Luc Picard

‘Tapestry’ is the fifteenth episode of season 6 and originally aired on the 15th February 1993 and still holds up as one of the finest entries across the entire Star Trek franchise. The premise sees Jean Luc Picard injured during an away mission and ultimately dies on the operating table. He awakens in what appears to be the afterlife, but it is not what he expected, as he is greeted by God, who turns out to be Q.

“I refuse to believe that the afterlife is run by you. The universe is not so badly designed” Picard quips as he struggles to come to terms with his demise and the most unsuitable custodian of heaven if ever there was one. However, Q continues with his charade (or is it?) and learns that Picard comes into his death with some regrets in his life, a most notable one being the reason why he finds himself once again in front of Q, his artificial heart. We knew that Picard had an artificial heart thanks to the episode ‘Samaritan Snare’ which sees Picard undergoing an operation to fix it, this episode expands on that and gives us the back story. Picard explains that he was stabbed through the heart when he was younger fighting off a couple of Nausicaans after an ill-fated game of Dom-Jot. Never one to miss an opportunity Q offers Picard a second chance and we soon find ourselves back in 2327. Picard a recently qualified Starfleet officer, being slapped by a woman who has discovered (as we just have) that Picard is a bit of a player when it comes to the ladies.

Q informs Picard that he has been given the chance to do it all again, to change his past, to change the outcome with the Nausicaans. If he can change the outcome, then the artificial heart will no longer be needed, and he will survive the events during the away mission that takes his life. A prospect that Picard embraces as he sets about the task.

What follows effects Picard’s life so much more than he could have ever expected. He acts upon his attraction to his friend Marta Batanides and faces off against his ally in the fight against the Nausicaans, Corey Zweller, preventing him from gaining revenge when the Nausicaans beat him at Dom-Jot, the cause of the fight that leads to a blade going through Picard’s back. This alienates both of his best friends and they end up going their separate ways.

We flash forward back to the present. Picard is alive and well, but he is no longer captain of the USS Enterprise. Instead, he is a lowly assistant astrophysics officer with no promotion prospects, meandering through life, playing it safe. Any hope of the flames of achievement in this new existence is quickly extinguished by Riker and Deanna Troi who inform him that this new persona he finds himself as “doesn’t stand out” and “just doesn’t take risks”. The man that Picard becomes when he changes his past is a stark contrast to the Captain that we have come to know over the 6 seasons of The Next Generation.

Thankfully Q offers him the chance to put things right, by sending him back and braving that blade once again. It’s a risk, it could mean that Picard does actually die as a result of the away mission, but Picard “would rather die the man I was. Than live the life I just saw”. Now that’s Picard. Safe to say that Picard returns and is stabbed by the Nausicaans and at the end of ‘Tapestry’, survives to lead the Enterprise through another season and half of adventure and amazing television.

What I personally love about ‘Tapestry’ is how relatable it is. We all have aspects of our lives that we regret and wish to change. Every action we take, every conversation, every mistake all makes up the building blocks of our lives and our personality. We learn from every encounter and life choice. If we didn’t make mistakes then we wouldn’t be able to build up our resolve, our tenacity or our ability of recovery. As Picard states when he pulled on those threads his life unravelled and it was only one aspect of his life that he changed. That one decision affected a whole life of future decisions and changed him into something that he didn’t like.

‘Tapestry’ also makes me think back to Star Trek V: The Final Frontier. A film I personally enjoy. OK the plot is sketchy, and it has some bad moments, but the character interaction between Kirk, Spock and McCoy is some of the finest. However, the speech by Kirk when Sybok is trying to share their pain in order to release them really ties into this episode and echoes what Picard goes through, to the point where it almost seems purposely connected.

“Damn it, Bones, you’re a doctor. You know that pain and guilt can’t be taken away with a wave of a magic wand. They’re the things we carry with us, the things that make us who we are. If we lose them, we lose ourselves. I don’t want my pain taken away! I need my pain!” – James T Kirk

Picard learnt this the hard way in some respects and witnessed it firsthand, it’s likely he was already aware of the ramifications but not to the extent to which they played out. Everything about ‘Tapestry’ is excellent from the writing, performances and its direction and sits happily in my top 10 of Star Trek episodes.

What are your thoughts on this ‘Tapestry’? Does it enter your top ten? Leave a comment and get involved via our social media platforms: