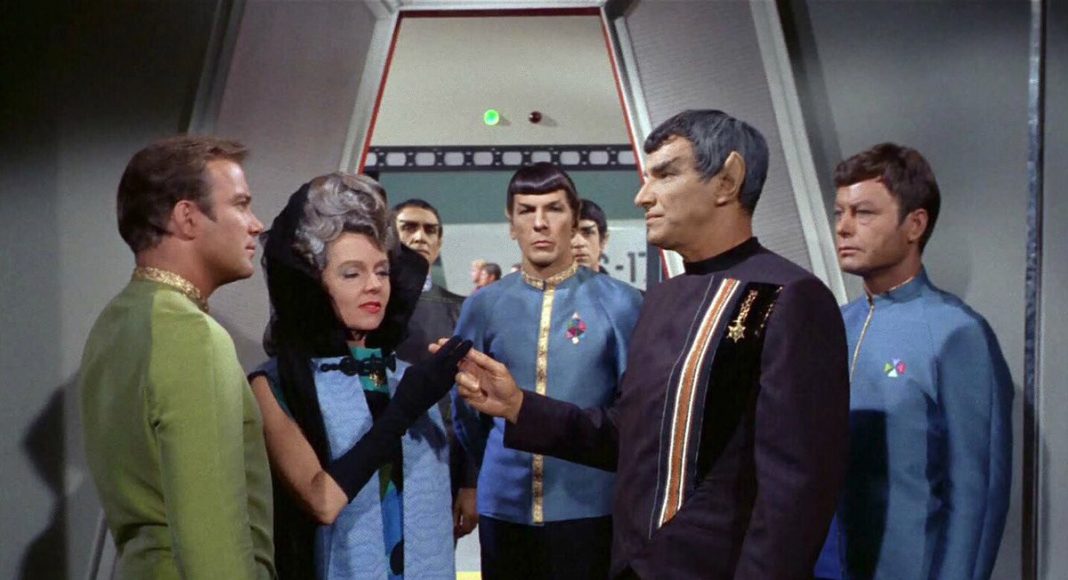 Trek Back: ‘Journey to Babel’

When ‘Journey to Babel’ first aired back in November 1967 it could not be conceived how much of an impact this episode would have, not only on the characters in the show but also for Star Trek as a whole as it helped influence the universe building for the Star Trek franchise in the years that followed. It introduced the Andorians and Tellarites for the first time who are later established as two of the four founding systems of the United Federation of Planets. A plotline explored and expanded upon more in Star Trek: Enterprise. It is also the first time that Starfleet intelligence is mentioned on screen and again this subsection of Starfleet goes on to have a massive impact on future incarnations of the franchise. It also offered some greater depth to one of Star Treks fan favourites, Mr Spock.

The main plot of this episode is a diplomatic mission that sees the Enterprise transporting over 114 ambassadors to a conference on the planet Babel in which a vote will take place to induct Coridan’s – along with their extensive access to Dilithium – admission into the United Federation of Planets. There are conflicting feelings amongst the ambassadors and a plot is unfolded by the Orions to scupper the whole thing by attacking the USS Enterprise and murdering the Tellarite ambassador Gav. They hope to disrupt the conference so they could continue to loot and exploit the Coridan’s Dilithium supply. A complicated conspiracy that actually plays second fiddle to the episode’s B story; Spock and his relationship to his parents.

I was kicking around stories and I finally went into Gene and said, ‘I want to do something about Spock’s mother and father, let’s explore that relationship. We’ve talked about them, let’s show them, he told me to do it, and I came up with ‘Journey to Babel’

Spock’s parents had been mentioned in previous episodes and a lot had already been spoken about his half-human lineage; ‘Journey to Babel’ introduces us at last in-person to Spock’s father Sarek (Mark Lenard) and his human wife Amanda (Jane Wyatt). When they both arrive onboard Kirk offers Spock the chance to visit the Vulcan planet surface to see his parents and its to his surprise when Spock states the that the ambassador and his wife are in fact his parents. Another example of how Spock continues to hold personal matters close to his chest and something that will become a bone of contention in the years to come. What’s clear from the first introduction is that something is off between Sarek and his son. He is clearly distant and treats his son with some disdain. We later learn that the two have not spoken as father and son in 18 years and that Spock has not visited home in over 4 years. The reason? Sarek wanted Spock to follow in his footsteps like his father before him and enter the Vulcan Science Academy. As we know, Spock chose to enter Starfleet.

Writer D.C Fontana wanted to explore that dynamic between the three family members. Sarek and Spock estranged, using their logic to justify their own convictions and harden their stance against the other, all the while Amanda stuck in the middle, a victim of Vulcan logic. Fontana wanted to make it believable that the two men were right from their own logical points of view. Later in the episode, Amanda calls out Sarek for showing almost human pride in his son’s accomplishments. What I liked about this scene is the fact that Sarek, still very logical and stubborn regarding his son, dismisses Amanda’s claim, but offers the first hint that a reconciliation might be on the cards. However, from what we know of the two men so far, that reconciliation would not be volunteered, so another way is needed. Sarek has a condition relating to his cardiovascular system which Dr McCoy relates it to a heart attack in humans, something Sarek has now experienced three times. After much debating Spock offers to be a blood donor so that McCoy can operate and save his father’s life.

A difficult, life-threatening procedure is made more complicated by the fact that Kirk is stabbed by an Andorian imposter and Spock must take up command delaying the operation on his father. Amanda pleads with Spock to relinquish command but again, logic becomes a barrier as Spock states the oath he took with Starfleet requires him to be in command and secure the safety of the passengers and delegates on board as the threat of an external attack by the Orions continues. It takes Captain Kirk faking his upturn in health to convince Spock to report to sickbay and allow McCoy to operate.

In the end, the operation is a success and both Spock and Sarek survive. Amanda, asking Sarek if he wished to thank Spock for his help is greeted once more by the logic of Vulcans, with Sarek stating that Spock was only working within the only logical choice he had and that should not be thanked. Spock agrees much to Amanda’s Frustration

Sarek: “She has always been that way.”

Spock: “Indeed? Why did you marry her?”

Sarek: “At the time, it seemed the logical thing to do.”

As the episode ends on a humorous note, we are left to think that a resolution of some kind has at least been achieved between father and son and that a barrier between the two has been broken down. We have to wait till Star Trek III: The Search for Spock to see Mark Lenard back onscreen as Sarek and it’s not until the Star Trek: The Next Generation episode ‘Unification Part 1’ that we learn more about the relationship and continued conflicts that persisted between Sarek and Spock. An episode we looked back on last month.  With Mark Lenard’s last appearance as Sarek, we discover that although the resolution wasn’t as successful as ‘Journey to Babel’ ending suggested, he does indeed have pride and love for his son which he confesses to Picard while displaying regret. When watched together these two episodes form a powerful and emotional story and offers an additional dimension to Spock’s development.

It went into the Vulcan relationships between families. I think that’s a story that’s universal and timeless – that communication between parents and children. And that to me was the big story. The rest of it was an adventure, it was a spy story, it was a mystery, it was an action story – but all in all it was really about the parents and the child… There had still been a vast lack of communication between them and they needed to find each other as parent and child.  Journey to Babel’ was a very happy experience. Bringing in the whole murder and the whole political background was a lot of fun, but personally, I was more involved, in terms of interest as a writer, with the personal story of Spock and Sarek and Amanda. That’s the part of the story that everyone remembers

D.C Fontana named this episode as her personal favourite out of all she wrote for the show and another example of how influential Fontana was in Star Trek.

An important episode for Star Trek, what are your memories? Let us know by joining us on our social media.