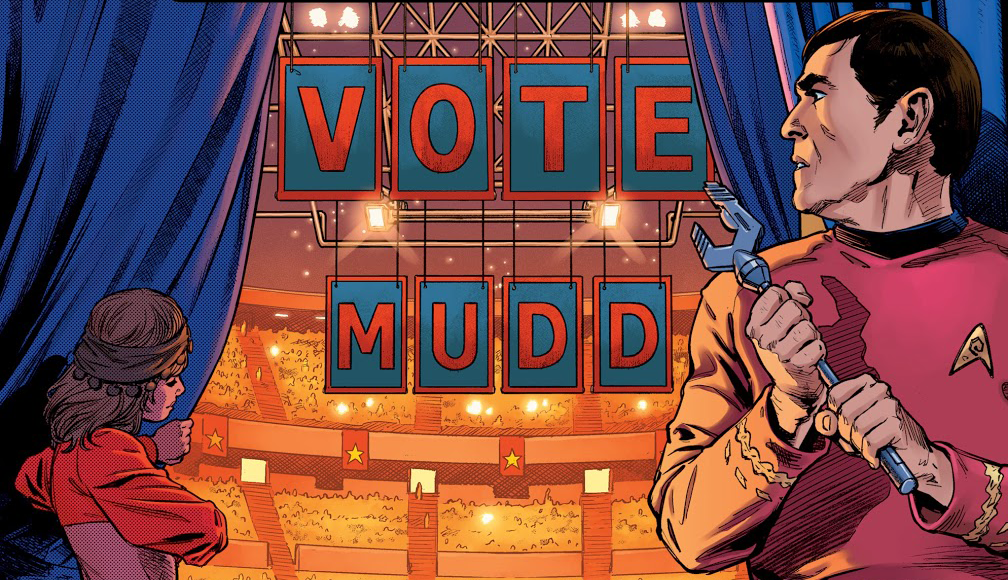 Harry Mudd ramps up his election campaign for the President of the United Federation of Planets but an unexpected visit from Gary Seven changes Mudd’s plans in Star Trek: Year Five #16

In the previous issue of Star Trek: Year Five it was revealed that Harry Mudd was running for the President of the United Federation of Planets; seemingly a changed man, now appearing to want to change the lives of the Federation members for the better. Captain Kirk is assigned to a diplomatic mission to visit Andoria to assess the lead candidate for the Originalists political party – a group who want to cease the expansion of the Federation to focus instead on the founding members – and is shocked to discover that Harry Mudd has been given the vote of confidence, despite his questionable background and stream of criminal endeavours. Suspicions on high alert, he, Scotty and the Tholian Bright Eyes begin to investigate. Issue 15 ends with an unexpected visit from former Enterprise ally turned enemy Gary Seven who seems to have a vested interest in Mudds campaign.

“I am Harcourt Fenton Mudd and I promise to raise the Federation to the glorious heights it was always meant to reach. Vote Mudd. Vote for a future we’ll build together”

The above quote is the final part of a political speech watched by the voters of the Federation and delivered by a man who we know to be nothing more than an expert manipulator, a true puppet master at work (Mudd). Kirk understands Mudd and knows that his motives are beyond that of a changed man but his more pressing concern is that of the Originalists movement. Stating that it goes against everything he has set out to achieve during his five-year mission. To cancel exploration to focus on enriching the lives of the founding members is “stagnation at best, regression at worst” as the captain notes in his personal log. I feel that the Originalists will have a bigger part to play in the future of the Year Five comics especially considering that the mysterious Gary Seven appears to be on their side.

Upon his arrival in Mudd’s office, Gary Seven angers the would-be president by questioning his motives, stating that his real plans are no doubt different from that of his sponsors. Mudd once again reiterates that he is a changed man with the best intentions and is looking to do his part for the Federation; to his surprise and intrigue, Seven admits to wanting the opposite. Seven understands Mudd’s natural characteristics as a man who is an engine for chaos and disruption, something that he seems keen to weaponize in some capacity and encouraging Mudd to pursue his natural course of action. To “show us just how useful you can be” Seven states before disappearing again. Whether this was all for show and Seven knew what Mudd would do is unknown but it causes a reaction from Mudd to change his plans as he is “no one’s patsy”. Calling his mechanised assistant Celia into his office, he informs her that his plans are changing and that they need to access to the data now. What data? Some ulterior motives starting to show themselves.

The cover of issue Year Five #16 shows Scotty secretly watching Harry Mudd’s speech while holding what looks like a futuristic spanner. Is he planning on throwing a spanner into the works? Or is it because Mudd’s assistant is a machine? Whatever the allegory behind the cover art it is another brilliant piece of work from artist Stephen Thompson whose work throughout the series has been outstanding. His Twitter account is also worth a follow as he often shows some alternative sketches that were open for consideration for Star Trek: Year Fives covers. What this cover does show is that Scotty plays an important role in this issue. Having failed in bruising fashion in his first attempt to use Celia to discover Mudd’s intentions; he comes up with a new plan following a quick chat with Bright Eyes. A more subtle approach is needed and so he catches up with Celia while working on something for Harry Mudd; taking a leaf out of Mr Spock’s book, engages in a logical discussion more appropriate for a logical mechanical mind. The programmed instinct to help Harry Mudd and not wanting him to come to any harm ultimately leads to their undoing.

As Harry Mudd tries to leave the planet – with much protest from the Originalists Campaign Chief of Staff Renei – he is stopped by Captain Kirk who thanks to Scotty and his efforts with Celia has proof that Mudd has stolen data including state secrets, technological patents and a hoard of information that he now plans to sell to the highest bidder. It’s a blow to the Originalists and his biggest support Renei, who he subsequently takes hostage. Thankfully Spock appears behind Harry Mudd and issues a Vulcan nerve pinch to end the potentially dangerous situation.

Year Five #16 ends with the Originalists needing a new candidate and with Kirk hoping it’s a nail in the movement’s coffin. It would appear though, that this is not the case. I stated before that it was unknown if Seven knew his provocation of Mudd would lead to his actions and capture; it could well have been part of a greater plan as he appears once again, this time to encourage Renei to take up the position of the new leader of the Originalist party as she is the best candidate for the job. She agrees but is suspicious of Seven asking him “what is your interest in this?” offering his hand in friendship “A better future” he replies.

Harry Mudd’s reign was over just as quickly as it started which is no surprise, he was never going to last beyond a few issues; it’s the reappearance of Gary Sevens which is the main factor here, his intentions frustratingly still unknown. This has been the case since his reveal in issue #12 when he tried to kill Kirk and destroy the Enterprise. It’s a mystery that the team seem to want to play out over a long period and are not going to reveal too much too soon. His interest in the Originalists is another clue, however. Maybe he is keen for the Federation to stop its exploration of space to prevent some future disaster that befalls his people. Only time will tell but it’s a fascinating narrative that I am keen to see out.