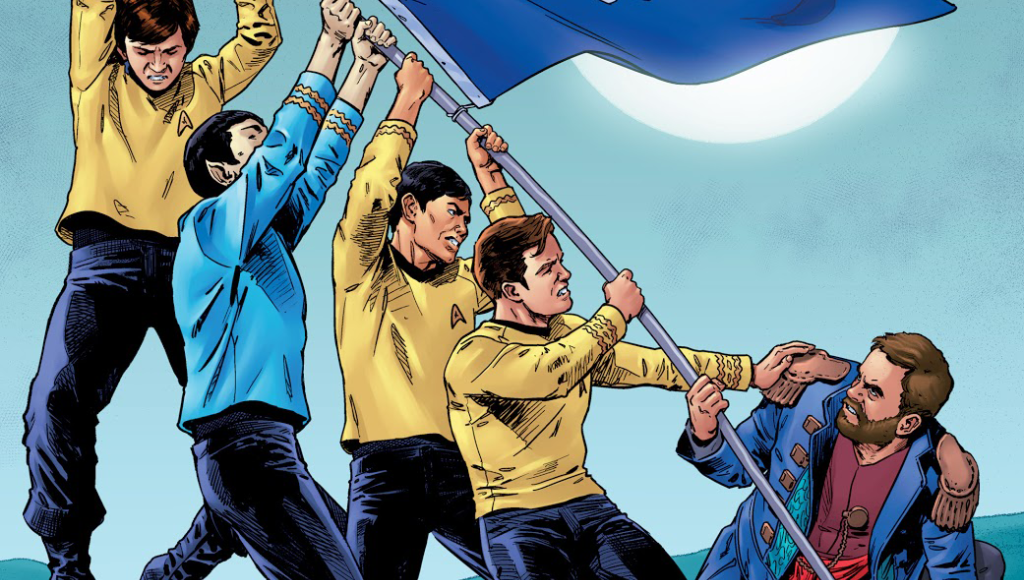 A new story arc begins in issue 15 of Star Trek: year Five and sees the return of a former enemy and a new threat to the United Federation of Planets

Year Five #15 starts off quoting American novelist Thomas Wolfe’s 1940 book ‘You Can’t Go Home Again’ in which he compares the life of a man to that of a “Tiny spurt of flame” in the vast darkness. Kirk in his opening personal log refers to this as he believes his first mission since returning to Federation space is a waste of his particular flame. The mission in question is to seek information on the Andorians candidates for the new political movement, The Originalists which first came to Kirks attention in Issue #13. The Originalists are a group of people who want to cease the expansion of the Federation to focus instead on the founding planets. This of course would make all future missions to explore the final frontier, obsolete.

It’s a clever reference to quote Thomas Wolfe by writer Jody Houser. Wolfe is known for exploring the ever-changing society of the American landscape in his novels and through the last 3 issues of Star Trek: Year Five Kirk has had to deal with how much the Federation has changed in the five years he has been exploring the galaxy. On his return in issues #13, we get our first glimpses of the Motion Picture era from the designs of the uniforms and the newest additions to the fleet (such as the Miranda Class) and now Kirk is being used as a political “spy” which expanded on in Year Five #15

Upon arrival at Andoria Kirk, Scotty and their newest crew member, the Tholian they call Bright Eyes are greeted by the Originalists Campaign Chief of Staff Renei who offers a derogatory greeting in reference to Bright Eyes as a “Pet”. The purpose of bringing Bright Eyes to the meeting is to demonstrate the advantages of exploration and meeting new species as Bright Eyes, who is not from a member system of the Federation, has joined and become a valued member of Kirks team.

It is a bit of a shame that the cover for Year Five #15 reveals who the candidate is for the Originalists push for the Federation presidency. The reveal in the pages of the comic is really well done as Harry Mudd enters the room in all his typical unjustified grandeur. He explains that since we saw him last in the Star Trek: TOS episode ‘I, Mudd’ when Kirk left him to lie in a bed of his own making, surrounded by a planet whose inhabitants are female androids as well as multiple copies of his former wife, he took full advantage of his sales abilities and sold the female droids and paid off most of his debts. This led to a realization that sales and politics are not too far removed. A realization that has taken him to be a leading candidate for the President of the United Federation of Planets. Its also explained that even though he is an ex-criminal, there are plenty of people in the Federation who are happy to turn a blind eye. Another example of how much the Federation has changed in the Enterprise’s absence.

What I find interesting about this Harry Mudd is that artist Silvia Califano appears to have chosen Rainn Wilsons version of the character to base her work on. In the Original Series, Mudd was played by the amazing Roger Carmel and the character was balding and overweight. The Mudd in Year Five #15 very much has the hallmarks of Wilsons on-screen interpretation. I don’t know if this is just because the character might be fresher in peoples minds thanks to Star Trek: Discovery season 1 and the Short Trek episode ‘The Escape Artists’ or if they are indeed linking the comic line more to the TV universe although probably not enough to be considered canon.

One aspect of Year Five #15 that does manage to surprise us is the ending as we get the reappearance of Gary Seven and Isis who has “a few questions” about Mudds campaign. Since his last appearance and battle with Kirk, we learn that Seven is on a mission to stop Kirk but we don’t know what that mission is or why he had turned against a former ally. It’s possible that the Gary Seven story arc will be coming full circle in the next couple of issues and that the Originalists play a big part in that story.