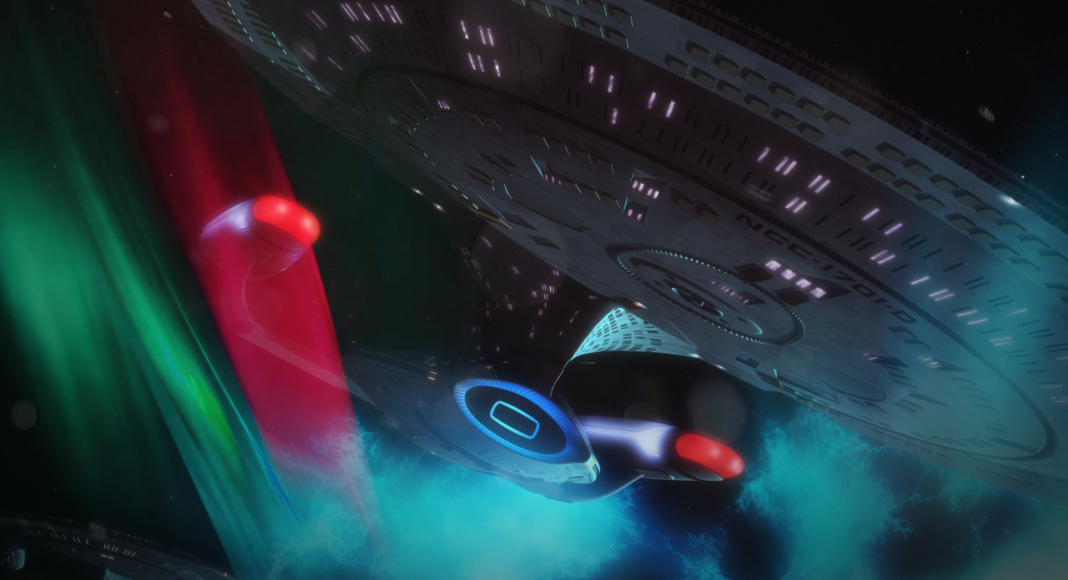 Alright, we may have seen this one coming. Yes, The ENTERPRISE-D Is Back For Picard Season 3! The upcoming Star Trek Picard season is looking ever so exciting. We’ve had hints that Captain Riker’s USS Titan may show up. Additionally, Sir Patrick Stewart has teased multiple Enterprises. However, we’ve now got confirmation that the legendary Galaxy-class Enterprise-D is back in style!

But you might be wondering, how can a destroyed starship return? First, this is Star Trek; second, this is Sci-Fi. But in all seriousness, there has been a clue in the second season of Star Trek: Picard. Right under our noses was a hint at the legacy of Jean-Luc Picard’s former starship. The Enterprise-D is arguably a main The Next Generation Character. She should have a place in the proper send-off for the crew.

Previously On The Crashed Enterprise-D

We all remember Star Trek: Generations. It’s the movie that killed off both Captain James T. Kirk (William Shatner) and the USS Enterprise-D. Seeing the Enterprise destroyed due to a warp core breach brought a tear to many fans’ eyes. However, part of the ship did survive. William T. Riker and the crew managed to navigate a successful crash landing of the saucer section on the nearby planet.

The Enterprise-D’s fate was up in the air following the movie’s end. However, with the successor movie introducing the new USS Enterprise-E, it was made clear the Galaxy-class days were over. While many of us love to see the Sovereign class taking the spotlight, many still remember the Galaxy class. Thankfully, Star Trek: Deep Space Nine kept the Galaxy around, though they did blow a few up.

Star Trek: Picard Season 2 included an easter egg about the USS Enterprise-D. While many presumed the saucer section was scrapped, thanks to beta-canon material, this was not the case. As confirmed by a ship plaque in the background of Starfleet Academy, the saucer section was recovered. It’s now being stored in the Starfleet Museum. So, was this our first clue towards the Enterprise-D returning?

So yes, The ENTERPRISE-D Is Back For Picard Season 3. But how do we know this? Well, we’ve had some clues for a while now. But we’ve not had enough concrete material to build off of. We’ll explore these other clues later. However, as of May 2022, actor LeVar Burton let slip a few details. He was speaking at Megacon 2022, and his comments have gone unnoticed until now.

We spent three days on a bridge that they build that was a replica of the Enterprise that we had during the series (TNG) – because we moved off of that ship, as soon as we got into the features…. when Marina crashed it was all over! (crowd laugh)

So there we have it! LeVar Burton, who himself returns to Star Trek: Picard Season 3 as Geordi LaForge, has confirmed it. The ENTERPRISE-D Is Back For Picard Season 3, which is super exciting. However, it does beg the question. How is the Enterprise-D back, as it was destroyed? There are a couple of ways this could work. LeVar might have added further clarification.

We went back to our bridge, and it wasn’t exactly, the ramp was a little steep, but the feeling it evoked in us, that sense of coming home was real. It was like being in a time machine, we were trasnported back to the 19, to the late 80’s.

Thanks to Star Trek: Picard Season 2, we know the Enterprise-D’s saucer section has been recovered. However, why would The Next Generation crew visit it? Sure, if the ship is stored in the Starfleet Musem, it would be a great trip down memory lane. But surely this could be done via a holodeck? We’ll touch on that in a moment.

If you look closely in the first episode of Season 2, you’ll spot a nod to the Enterprise-D. During Jean-Luc Picard’s trip to Starfleet Academy, he is seen talking to Elnor (Evan Evagora). Behind them are plaques about former starships, including the USS Voyager. One shows the Enterprise-D, given it’s the Federation’s former flagship.

This plaque, which you can see below, updates what happened to the saucer section of the galaxy-class starship. According to this information, it has been relocated to the Starfleet Musem. Therefore the Enterprise-D lives on in some capacity. It is possible for the bridge section to be visited, as it only sustained minimal damage during the crash landing.

What if the Enterprise-D bridge is a holodeck recreation? It would not be the first time Star Trek has recreated an Enterprise bridge to take a trip down memory lane. James Doohan’s famous cameo in The Next Generation saw the original Enterprise bridge reconstructed for the episode. However, does this mean we’re seeing the same done for Star Trek: Picard?

It could be the case. Art Director Kit Stolen shared a picture of the iconic Enterprise-D holodeck arch in bubble wrap. However, does this mean we’re getting some holodeck time on the Enterprise-D or perhaps another Galaxy-class vessel with a similar design? Perhaps! When asked about it being the Enterprise’s specific arch, he replied, “No & yes”.

The date on the tweet is March 25th, a few weeks after Star Trek: Picard Season 3 wrapped filming. Therefore most of the sets for the production would have started being broken down and packed away, as is the case with fast-moving productions like Star Trek.

I’m super excited that The ENTERPRISE-D Is Back For Picard Season 3! It would seem like Showrunner Terry Matalas has done everything he can to give The Next Generation crew the send-off they deserve. Hearing LeVar talk about being back on the Galaxy-class bridge has me excited for the feeling of when it reaches our screens in 2023. Let’s make sure history never forgets the name, Enterprise.

Star Trek: Picard Season 3 is the finale season of the Paramont+ series. It is expected to air in 2023. However, no specific date has been released. Sir Patrick Stewart will be joined by his Star Trek: The Next Generation castmates in what looks to be the final grand send-off for Picard and the crew.

? – Star Trek Should Take A Gamble And Leave Khan In The Past

? – End Of The Line For Star Trek Starships Eaglemoss?